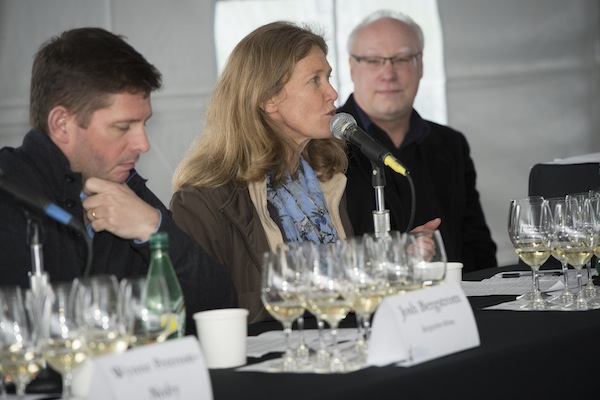 DAYTON, Ore. — The sold-out 2014 Oregon Chardonnay Symposium might be best remembered for winemaker Jesse Lange describing one of his bottlings as a “lingerie-style” Chardonnay — a reference to his suave use of French barrels as opposed to unoaked “naked” wines.

“Yeah, I should have looked into trademarking that, but it’s probably too late now,” Lange chuckled while pouring at the grand tasting that followed the panel discussion he took part in. 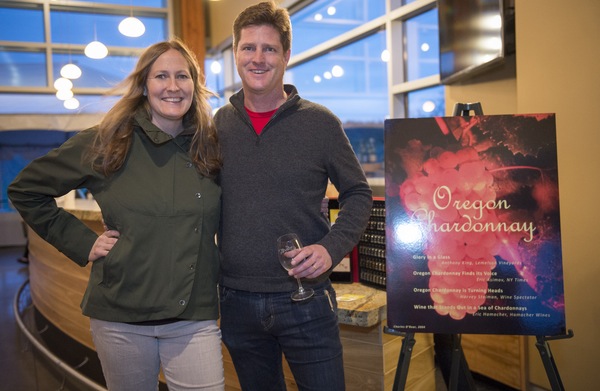 Support for this third annual study of Chardonnay, both from producers and the public, delighted symposium co-founders Paul Durant and Erica Landon, who moved their event this year from nearby Durant Vineyards.

“Last year, we had such an overwhelming interest from the Oregon industry that we decided it was really important to expand the event,” said Landon, a wine educator, wine buyer and co-owner of Walter Scott Wines in Salem. “We wanted to include as many producers as possible and really get that conversation started, not only with consumers but also with each other in the industry on where we are going with Oregon Chardonnay. What’s the definition of Oregon Chardonnay and what makes it special?”

Durant and Landon recruited nine of the Willamette Valley’s most renowned Chardonnay producers to serve on their technical panel, which devoted two hours to defining and describing France’s most famous white variety. Those nine winemakers then joined 33 other wineries to pour at the grand tasting inside Stoller’s tasting room.

“We had over 70 Oregon wineries submit Chardonnays to participate this year,” Landon said. “I didn’t even know there were 70 Oregon Chardonnays made, but 40 were selected.”

Danehower, an author and journalist who publishes EssentialNorthwestWines.com, made the first of many reference to the late David Lett of The Eyrie Vineyards.

Ironically, Véronique Drouhin-Boss of Domaine Drouhin Oregon, said, “I think Oregon is Oregon and should not try to be Burgundy or California.”

And when it came to the question of defining Oregon Chardonnay, “I don’t think I can,” she said, adding, “We need to better know the soil and terroir, and the way to do that is not flattering our wines with oak. Let’s make the wine as pure as possible.”

Her 2012 Chardonnay Arthur, which is DDO’s largest production of the variety, saw only half of the juice fermented in French oak, which was 30% new barrel.

As Lange referenced playfully, many of the winemakers on the panel use a barrel program of about 15% new French oak for their reserve-level Chardonnay, but the transition has come about slowly.

Leaders limiting use of oak in Chardonnay 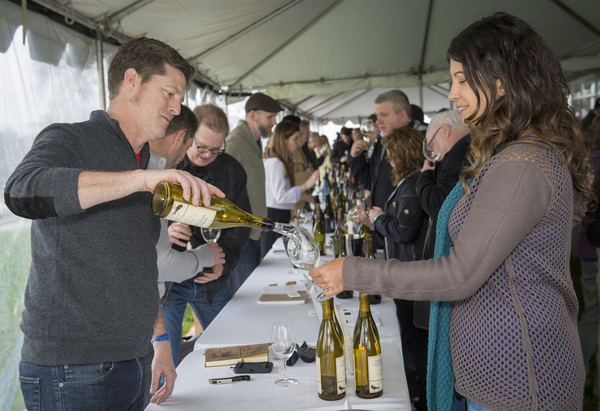 Paul Durant of Durant Vineyards pours for Melissa Burr of Stoller Family Estate during the grand tasting of the third annual Oregon Chardonnay Symposium on March 8, 2014 in Dayton. (Photo by ©Andrea Johnson Photography)

Stoller winemaker Melissa Burr admitted, “I’ll be honest. I started off making Chardonnays with a lot of expression from oak and full malolactic (fermentation). Almost like a recipe.”

Since taking over the winemaking in 2003, she’s dialed down the barrel fermentation in her reserve style to 15% new French oak, but her largest production white wine is an all-stainless steel Chardonnay.

“Oregon has the blessing of different vintages,” she said. “That’s what makes this a special place to make wine and drink wine. You can’t recreate what you want to do each year, unless you are so heavy-handed with the oak, but I don’t think that is anyone’s intention here. There’s no recipe.”

David Adelsheim, founding winemaker of Adelsheim Vineyard, vividly recalls that when Oregon producers began working with Chardonnay, the marketplace forced many to emulate California rather than Burgundy.

“We couldn’t do either one,” he said. “We made Pinot Noir where there was no established New World style, and arguably we’ve done an OK job.”

A focus on Chardonnay — at the expense of other varieties, including Pinot Gris — is critical for Willamette Valley winemakers to take that next step, Adelsheim said. He noted that his vision for Chardonnay produced at his winery is firmly rooted to the red Jory and Nekia soils with about 15% new French oak, which allows for the expression of terroir and elegance often found in Pinot Noir. 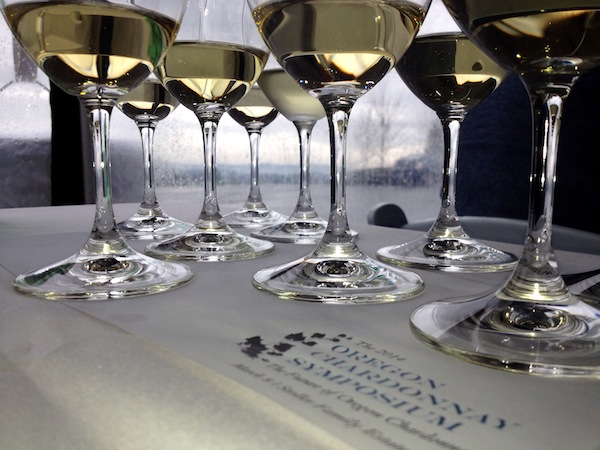 The technical tasting panel at the third annual Oregon Chardonnay Symposium afforded VIP guests the opportunity to sample reserve bottlings from some of the Willamette Valley’s top producers on March 8, 2014, in Dayton. (Photo by Eric Degerman/Great Northwest Wine)

Brix level was “one of a dozen things I’ve learned about Chardonnay,” said Doug Tunnell of Brick House Vineyards. “Sugar plays much less of an important role with Chardonnay than it does with the red varieties.”

The warm 1998 vintage taught him that painful lesson, he said.

“I did not yet listen to myself say ‘Ignore the brix,’ ” Tunnell said. “I was thinking more about sugar and less about acid. I didn’t dump the wine, but I probably should have.”

“When you are sweating about how the markets and the critics are going to feel about your Pinot Noir, you are probably going to find that your Chardonnay is likely to be the star of the vintage and the wine you really want to drink,” he said, noting recent years such as 2010 and 2011.

Danehower pointed out Chardonnay accounts for just 5 percent of Oregon’s production, and while there were repeated references of “white Burgundy” wines, the less-expensive Pinot Gris was uttered just twice during the two hours — even though Lett is credited with being the first producer of Pinot Gris in the United States. 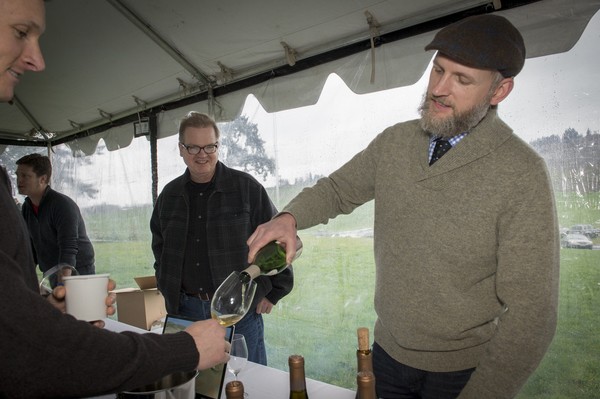 Jason Lett of The Eyrie Vineyards pours a 1988 Chardonnay while Jay McDonald of EIEIO looks on during the grand tasting of the third annual Oregon Chardonnay Symposium on March 8, 2014, at Stoller Family Estate in Dayton. (Photo by ©Andrea Johnson Photography)

Pinot Gris is one of the many white varieties that Bergström experimented with since he helped his parents launch the winery in 1999. Chardonnay is now the only white wine he makes, and he’s learned along the way.

“One year, I would emulate the California style. And I failed,” Bergström said. “And the next year, I tried the Dominique Lafon style and failed. And finally in 2003, I reached the pinnacle of my disappointment with the most disgusting Chardonnay I ever made. It was a big, oily, ripe, banana cream pie-type of wine that had 15 percent alcohol, and I dumped all eight barrels down the drain. I decided to re-create my lifelong program.”

The exploration, Bergström said, began during a three-year span of buying fruit and library wines from Lett.

“This was the first time ever in Oregon that I had tasted salinity and seashell-like minerality in a wine — something that I believed only happened in the Old World,” said Bergström, who relied on that knowledge when he launched the Sigrid program with the 2006 vintage. ”I decided to plant Chardonnay and farm it to the same quality standards as Pinot Noir, on the best slopes, labor-intensive, biodynamic and low yields.”

That also explains why he commands $85 per bottle for his Sigrid.

“Rather than pricing it first and working backwards, I put in the work first and priced it accordingly,” Bergström said. “That essentially is saying my goal is to make the greatest white wine in America — not just something that I can pour at a winemaker’s dinner at appetizer hour.”

His first-hand experience working Chardonnay harvests in Burgundy also prompted him to change his picking decisions based on the profile of their grapes at harvest.

“Showcasing flavors of lime, lemon, Granny Smith apples — these were flavors I believed were unripe before I went to Burgundy,” he said. “I used to wait for melon, pear, Golden Delicious apple.” 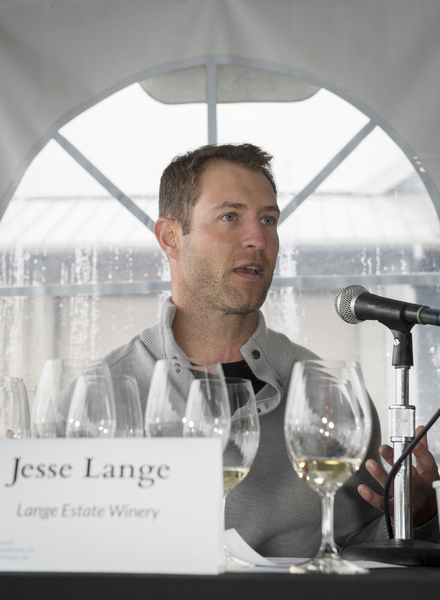 Jesse Lange of Lange Estate Winery shares his presentation with the technical panel at the third annual Oregon Chardonnay Symposium on March 8, 2014, in Dayton. (Photo by ©Andrea Johnson Photography)

The erstwhile winemaker at Stags’ Leap Winery in Napa said he’s produced at least one Chardonnay from every vintage since 1976.

“I think we will know what Oregon Chardonnay is maybe 20 years from now,” Brittan said. “Once we have had the same history of planting the right property with the right selections with the right root stocks, made by the right winemaker — maybe the winemaker’s children — maybe at that point we’ll have a clear definition of Oregon.”

Anecdotally, Brittan encouraged his peers not to give up on “the dreaded clone 108,” which he said is essentially selection 4 from University of California-Davis. “It is a very interesting tool to be used in Oregon. I wouldn’t abandon it as we have tended to.”

Lange grew up with California-style Chardonnay

“I think acid is the framework for most of your white wines and the scaffolding which everything hangs on,” Lange said. “When Chardonnay has got that sort of nervous, electric edge running through it — that vibrancy — that’s when it’s most appealing.”

He thanked Drouhin-Boss for providing his epiphany with Chardonnay, a barrel tasting of Le Montrachet in the cellar of the original Domaine Drouhin in Burgundy. “That set the tone for me with that vibrancy of fruit.”

But as Lange cleverly points out, he’s not about to kick French barrels out of his bed. The Lange Estate Winery 2012 Three Hills Cuvée, a blend of Freedom Hill, Durant and Lange estate vineyards, features yeasts of his choosing, partial malolactic fermentation and a barrel program of 60% French oak.

“It’s been sort of interesting over the last 10 years to notice the shift with consumers about stainless-steel Chardonnay and a more true expression of the fruit,” Lange said. “So for a long time I had a lot of people ask me if my Chardonnay was ‘naked.’ You guys have heard that term a little bit — naked Chardonnay — out in the marketplace?

“I got a little annoyed with it, so I sort of call our Chardonnay ‘lingerie style,’ ‘ he said. “It’s a blend of both stainless steel lots and responsible use of French oak.”

Wynne Peterson-Nedry, the other second-generation Oregon winemaker on the panel, recently took over production at Chehalem Wines. She continues the traditions established by her father, Harry, who developed three tiers of Chardonnay, including their large Willamette Valley production.

“This is a fantastic grape, and for me, there’s no reason to only make one wine from it,” she said. “We also want to make a wine that is cropped a little higher and in stainless steel. That keeps costs down and keeps accessibility to younger folks — new wine drinkers — and you can put it in a keg, put it in growlers and take it home. It’s a food-friendly, everyday-type of drinking wine.”

2015 event to focus on clonal selection

There were 144 tickets tickets sold ($100 each) for the two-hour technical panel, with an additional 60 sold for two-hour grand tasting that followed.

Demand created a waiting list that could not be accommodated, so the 2015 Oregon Chardonnay Symposium likely will be moved to a larger venue, organizers said. That will be Saturday, March 14, with the theme “The Attack of the Clones.”