Editor’s note: This is the first in an occasional series called ‘The Great Northwest Wine Time Machine Project,” a look at the stories behind the labels of older Pacific Northwest wines.

RICHLAND, Wash. — Rob Griffin established Barnard Griffin Winery back in 1983, but he first moved to Washington state six years earlier when Bill Preston hired him to take over as winemaker at Preston Wine Cellars in Pasco, Wash. 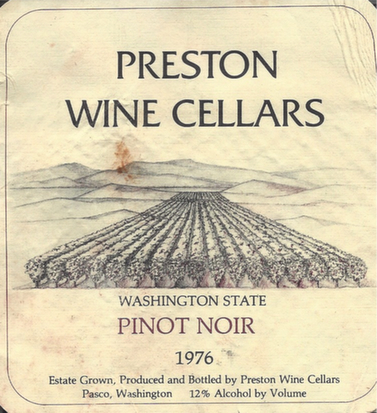 “I arrived at Preston in April ’77, and this was one of many wines which had been fermented the previous fall,” Griffin told Great Northwest Wine. “It was in a state of preservation but not of elevation and, speaking frankly was a bit of a problem child and a bit of an ‘odd duck’, at least to my U.C. Davis-trained palate.

“You must remember that in 1977 the ‘Pinot revolution’ had not started in California and the Oregonians were making bold claims to ownership of the variety,” Griffin continued. “We passed the wine through French oak (new, Sirugue from Burgundy) and bottled it with a few corrective touches.”

“At that time, the Washington County Fair in Hillsboro, Ore., had an ‘all comers’ wine judging, and we entered the Pinot Noir along with several other wines. This ’76 Preston won best of show, to the outrage and consternation of the Oregon winemakers who were gobsmacked by the temerity of a Washington wine taking top honors in the holy of holies category.”

How much was the Willamette Valley rocked by the Preston ’76 Pinot Noir?

“The amusing part is that the competition rules were swiftly changed to exclude Washington and other states’ wines,” Griffin said. “This pretty much guaranteed an Oregon best of show.”