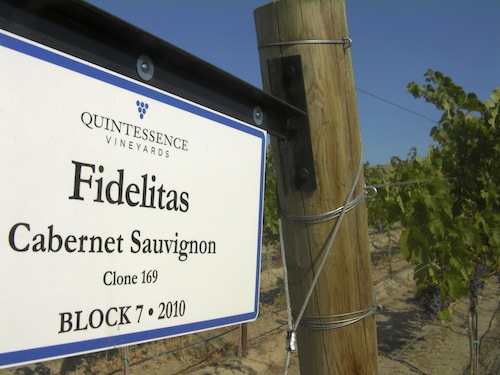 Quintessence Vineyard is one of the newest vineyards on Washington’s Red Mountain and is quickly gaining fame for high-quality Cabernet Sauvignon. (Photo by Andy Perdue/Great Northwest Wine)

For the first time in history, Washington’s No. 1 grape is red – and it’s Cabernet Sauvignon.

Washington has long been thought of as white wine country, a mistaken impression from California wine “experts” who see Washington as too far north to effectively grow wine grapes. They mistakenly based this in part on knowing only about the drizzly west side of the state.

Yet Washington is on the same latitude as Bordeaux, the area of France that made Cabernet Sauvignon famous. Latitude, however, is pretty much where the similarities between Washington and Bordeaux end. Eastern Washington’s Columbia Valley is arid and hot, rarely getting more than 8 inches of precipitation per year – most of it coming outside of the growing season. Indeed, the Columbia Valley receives two more hours of sunshine per day than Napa and Sonoma during the height of growing season and a shift in temperature of 40 to 50 degrees between day and night during the key ripening and harvest seasons.

Cabernet Sauvignon often is one of the last grapes harvested in Washington, with growers and winemakers waiting until the second half of October to pick the fruit. Yet warm areas such as Red Mountain brought in Cab in early September last year because of the exceedingly warm vintage.

So let us celebrate Washington Cabernet Sauvignon by taking a look at 12 examples we have tasted and reviewed in the past few weeks.