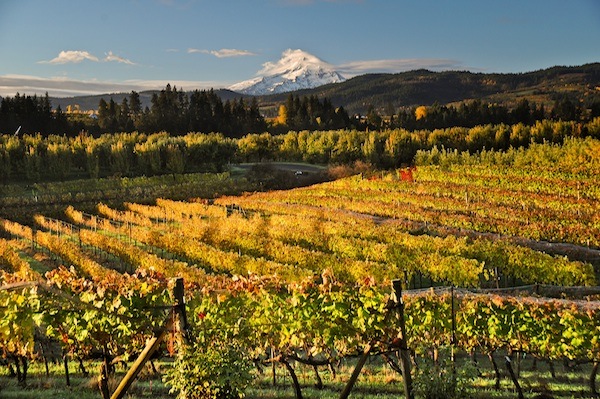 Mount Hood looms in the distance as wine lovers in both Oregon and Washington tour the Columbia Gorge. (Photo courtesy of Columbia Gorge Winegrowers Association)

HOOD RIVER, Ore. — Cathedral Ridge Winery owner Robb Bell long has believed in the longevity of Pacific Northwest wines, so this year he began showing Columbia Gorge wine lovers just how some of his wines have arrived from point A to point B.

“I think the ‘cellar well’ comment has real value for our region,” Bell told Great Northwest Wine. “The Northwest wine scene is producing truly excellent wines that can now prove they cellar well, too.”

Bell refers to his exercise for guests at his Hood River winery and tasting room as The Vertical Varietal Immersion Series. It began last month by spotlighting Syrah and Zinfandel.

On Saturday, he will bring out examples of Cabernet Sauvignon, Merlot and Cabernet Franc. Next month, he closes out his inaugural “immersion” series with a look at two of Oregon’s top varieties — Pinot Noir and Chardonnay.

For $25, he pulls examples from barrels, current releases and his library, and his staff pairs each wine with selected appetizers. 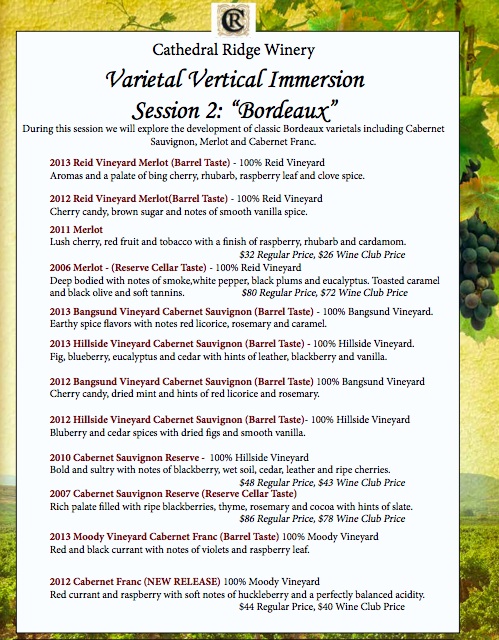 The two wines of Cabernet Franc poured will both be all from Moody Vineyard — the 2013 and 2012 vintage.

The purpose, Bell said, is to offer guests an insider’s peek of how individual vineyards produce distinctive aromas and flavors, show that pairing the right food can bring almost any wine to life, and how truly great wine benefits from being aged.

Bell and his staff structured these sessions for 25 people, but the response for the seminars that focused on Syrah and Zinfandel from Hillside Vineyard, Kortge Vineyard and Scorched Earth Vineyard exceeded his expectations.

“In a consumer career longer than I want to tell you, I have never seen a more positive response by both beginners and experts,” Bell said. “Over 30 people attended and specifically enjoyed several things —  the opportunity to ‘see’ the wine from a single vineyard develop overtime; the opportunity to discuss in a group the characteristics of the developing wine, and finally, they felt much better about current Cathedral Ridge wines because they now know that they will cellar well.”

His cellar includes some older Rieslings, legacies left by Don Flerchinger, who founded Flerchinger Vineyards in 1985 and sold to Bell in 2003. The purchase of the winery, Bell said, was contingent upon Sonoma-based Michael Sebastiani making the wines for his new Cathedral Ridge project.

In 2007, the work done by Sebastiani, whose family has been making wine in California for four generations, prompted Wine Press Northwest magazine to name Cathedral Ridge its Oregon Winery of the Year. Another key player in the success of the winery has been longtime vineyard consultant Lonnie Wright.

Bell remains proud of that award, which he continues to promote on billboards along Interstate 84. His hope is  the recognition of the wines that the Columbia Gorge can produce helps not only Cathedral Ridge but also his neighbors.

“While we present a unique opportunity, other wineries can replicate this in part or in whole for the benefit of their customers and sales,” said Bell, who also operates a tasting room in Dundee. “The opportunity to taste and learn over a 10-year time frame with a specific vineyard is unique — and almost a privilege.”