In a West Coast Cab smackdown, Horse Heaven Hills holds its own

The Benches is one of the most dramatic vineyards in the Pacific Northwest. The vineyard in the Horse Heaven Hills rises more than 1,000 feet above the Columbia River. (Photo by Andy Perdue/Great Northwest Wine)

GEYSERVILLE, Calif. – After a successful Malbec smackdown between the best of Washington and Argentina, we decided to try something similar with Cabernet Sauvignon between Washington and California.

In September, I approached Mike Dunne, a longtime friend who also is the wine columnist for The Sacramento Bee. After a bit of wrangling, we decided to narrow the focus to specific American Viticultural Areas. Mike chose Napa Valley, and I decided on the Horse Heaven Hills, a relatively new AVA approved in 2005. Not long after, we approached syndicated wine writer Dan Berger to join the fray, and he took Sonoma County.

On paper, the fight was a bit unfair:

But I didn’t mind the disparity. After the Seahawks broke the 49ers’ hearts on national TV, I needed to throw my California friends a bone.

Mike and Dan chose their four wines based on individual tastings, while I conducted a group blind judging to reduce my choices from 24 wines to four. Mike, who had Napa Valley, chose some real heavyweights – both in reputation and price. Dan, who tends to be pretty price-conscious, was excited to bring some (relatively) inexpensive Sonoma Cabs to the table.

We then brought in two top wine professionals from Northern California, so our final judging panel looked like this: 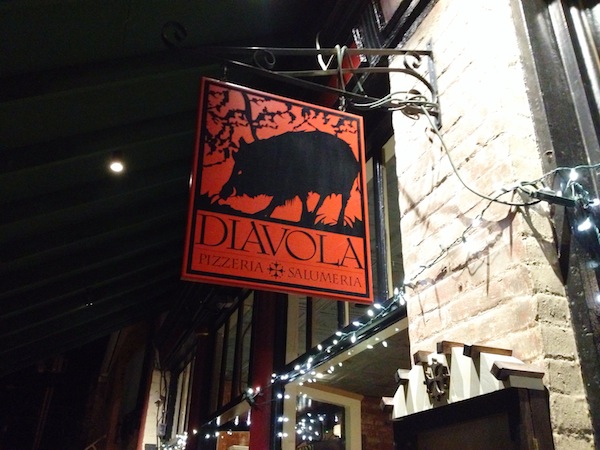 Diavola Pizzeria and Salumeria in Geyserville, Calif., is just off Highway 101 in Sonoma County. (Photo by Eric Degerman/Great Northwest Wine)

In January, we met in the northern Sonoma County town of Geyserville at a terrific Italian restaurant called Diavola.

For fun, Mike dubbed this “The Judgment of Geyserville” in honor of the famous 1976 “Judgment of Paris” tasting that put Northern California on the world wine map.

This would not be quite as epic, but we all knew we’d have a better sense of humor than the French experts after this one was over.

Here were the 12 wines tasted:

We tasted the wines blind, meaning we didn’t know who made them until after the notes were taken and the judging was complete.

It turned out to be an extraordinary judging. Of the 12 wines tasted, seven earned the equivalent of gold medals (“Outstanding” ratings in Great Northwest Wine parlance). Of these, two were from the Horse Heaven Hills, two were from Napa Valley and three were from Sonoma County.

My four favorites were the Kendall Jackson, Jordan, Antica and Stonestreet – proving I was not influenced by a “local palate.” Indeed, my highest-ranking Horse Heaven Hills wine was the Alder Ridge.

The final order of finish showed some interesting trends:

Most glaring is that the two lowest-scoring wines were from the Horse Heaven Hills – and both were the highest-ranking wines in our Horse Heaven Hills Cab judging held only a month earlier. What are the reasons for this? I’m not quite sure, but here is some conjecture:

Each of the judges promised to write about the experience. Here is where to find others’ perspectives:

A few of my takeaways from this judging include:

What’s next? We all loved the concept of seeing how various regions stack up with each other, and there are plenty of opportunities, including Merlot, Syrah, Riesling, Pinot Noir and even Tempranillo or Sangiovese. We definitely want to continue to put on these “smackdown” judgings a couple of times per year.

Let us know in the comments or by email what you think.