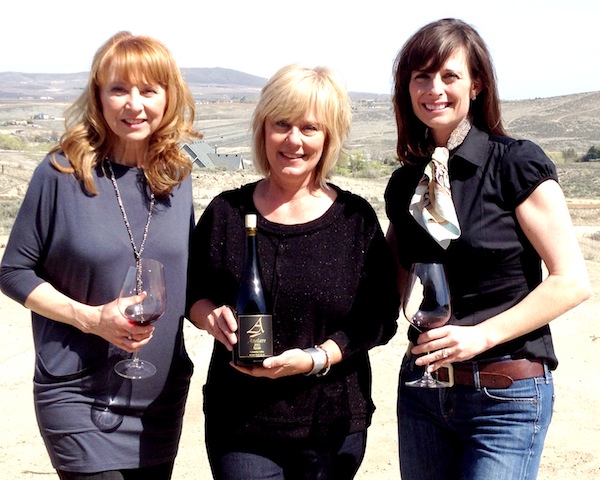 Gravenslund spent more than a decade heading up the tasting room, wine club and hospitality at acclaimed Barnard Griffin in nearby Richland.

“We’ve watched her with customers and watched her work and always respected her greatly,” managing partner Kahryn Alexander told Great Northwest Wine. “We put an offer together, and she graciously accepted. We’re very excited.”

“This is perfect,” Gravenslund said. “I’m looking forward to helping build the brand. I want it to be thought-provoking and to do it over time. That’s another exciting part. (Anelare) has a great reputation, and everyone I’ve talked to about this job says, ‘Oh, you’re so lucky. That’s an amazing family.’ ”

12 months of transition, optimism for Anelare

It’s been a remarkable 12 months for the Alexanders. First, there was a winemaking transition from Victor Cruz of Cañon de Sol to Charlie Hoppes of Fidelitas on Red Mountain and Wine Boss in Richland. 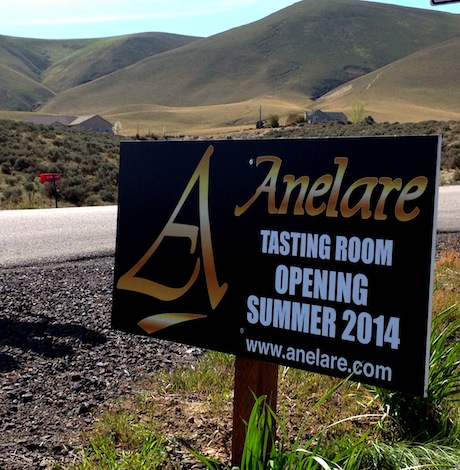 Then, Kahryn and her husband, Forrest, came upon a stunning 10-acre parcel in the Yakima Valley between Red Mountain and the northern slopes of the Horse Heaven Hills. It included a rustic barn that’s being transformed into their new tasting room. Just a pitching wedge away is a spacious and modern family home that’s surrounded by a tall sagebrush.

“This is a gorgeous location,” Gravenslund said. “I’m very excited. It’s going to be a very special location once we get the signs up and the word out.”

The four partners who created Anelare in 2007 include Forrest’s in-laws — Jim and Cindy Campbell. Earl Smart, another family member and longtime Tri-City wine professional, will share the tasting room duties with Gravenslund.

“With the things that have happened in the last year, hiring Charlie and really taking it up a notch with the wine, and getting blessed with this incredible venue, it seemed like a natural fit to have someone like Kim come in and take us to the next level,” Kahryn said.

Anelare debuted with red wines from the acclaimed 2005 vintage, and vineyard sources include Gamache, Weinbau on the Wahluke Slope and famed Ciel du Cheval on Red Mountain.

The partners expect that the new location and Gravenslund’s arrival will spark interest in their wine club and the Anelare brand, which has not had a consistent tasting room presence in the Tri-Cities since leaving Kennewick’s Southridge Village more than two years ago.

“To be honest, it’s been tough for us to grow because we haven’t had a place,” Alexander said. “I’m really excited to see us grow once people come out, see the view and hang out on the patio.”

One of the perks for Anelare’s wine club members is the opportunity to reserve the new tasting room once each year for a private function — free of charge. They estimate the facility can accommodate 30-40 people for events such as business retreats, book club meetings or bridal/baby showers.

Anelare wines will continue to be poured in Spokane at Nectar Tasting Room. “It has been a nice venue and market for us,” she said.

A new tasting room with a view

“Wine, bread, cheese and conversation,” Campbell said with a chuckle.

The move to developing a tasting room in wine country — with a captivating view of Red Mountain — also holds some romance for Gravenslund, who hopes to attract outdoors enthusiasts who hike Chandler Butte and the McBee Grade Loop. Anelare’s tasting room is near the trailhead on McBee Road.

Wine tourists will use the turnoff from Webber Canyon Road, a popular biking route for cyclists. And when the winds are right, hang gliders touch down in the shrub-steppe that surrounds the Alexanders’ new home, so Anelare looks forward to an assortment of tasting room traffic.

“I love the wine industry, and I love people,” said Gravenslund, a former registered nurse who moved to the Tri-Cities from Minnesota with family in 1980. “This is getting back to what the wine business really is to me — getting back to wine and people.”

Her work will be on a much different scale from Barnard Griffin, one of the Pacific Northwest’s largest family-based wineries with annual production that Gravenslund watched double from 35,000 cases to beyond 70,000 cases during her 12 years with winemaker Rob Griffin and wife Deborah Barnard.

Gravenslund’s role at Barnard Griffin grew soon after she joined the Tulip Lane winery as a part-time tasting room staffer in 2002. Within two years, she became into a full-time administrator who managed the tasting room, built Barnard Griffin’s wine club program from scratch and played a role in the rise of the winery’s event center, wine bar and eatery.

She also served as a mentor for Elise Jackson, who graduated from Washington State University in 2009 with a business degree and has transitioned into a leadership role at her parents’ winery. Jackson’s sister, Megan Hughes, makes wine alongside their father.

Anelare to be open 4 days a week

Barnard Griffin continues to reap some of the benefits from nearby housing developments in Richland and West Richland, and at the same time, the state’s growing wine culture created the demand to operate a tasting room seven days a week.

Gravenslund’s initial plan is for Anelare to be open to the public four days a week.

“At least for the start, I see us being open Thursday-Friday-Saturday-Sunday from 11 a.m.-5 p.m., which from our research is pretty standard,” Gravenslund said. “And then time will tell.”

Even though it takes two minutes to walk from her home to the tasting room, Alexander said she realized she would need help to manage it.

“I already feel like I’m on my computer all the time,” said Alexander, who looks forward to getting back more time to spend with Forrest, their two young children and Charlie, a gregarious 2-year-old Labradoodle.

There are about three more months to go before the tasting room opens, which gives Gravenslund, the Campbells and the Alexanders time to refine their plans.

“It wasn’t a main focus to hire a general manager right at this point,” Alexander said. “We would have waited a little longer for the tasting room to open, but we didn’t think someone like Kim would walk by again.”