ASHLAND, Ore. — Research climatologist Greg Jones, whose work is respected in the Pacific Northwest wine industry and beyond, predicts warmer and wetter conditions for the region during second half of April.

Jones issued his first report of the spring Friday, and the Southern Oregon University professor’s interpretation of the long-range forecast for the 2014 vintage tracks with the report he presented earlier in the year at the Oregon Wine Symposium in Portland.

“The clear spring conditions look to continue for a few more days but will shift to a few frontal passages and rain potential over the next two weeks,” Jones wrote last week. “The 6-10 and 8-14 day outlooks tilt the odds to being warmer than normal over the vast majority of the western U.S.

“However, precipitation potential is following a north-south pattern, with wetter-than-normal conditions across most of Oregon, Washington into extreme northern California, but continued drier-than-normal conditions into central and southern California,” he continued. “Extended out to 90 days (April-May-June), the Climate Prediction Center forecast is tilting the odds to moderately warm and continued dry conditions over the western U.S.”

The Ashland school recently promoted Jones, who now serves as director of Division of Business, Communication and Environment. His former title was that of professor in the department of environmental sciences. He arrived at Southern Oregon University in 1997 after receiving a doctorate for his climate research at the University of Virginia.

“The long-lead forecasts for March and into early April have generally held true across the western U.S.,” Jones wrote. “Current conditions have brought a beautiful stretch of spring days, but with some scattered frost conditions.”

In 2009, London-based Decanter Magazine placed Jones at No. 33 to its Power List, recognizing him as one of the 50 most influential figures in the world of wine.

Despite the warm temperatures of the past few days, Jones warned that “frost season remains with us a little while longer.”

Traditionally, orchardists and vineyard managers in the Pacific Northwest don’t sleep easy until after Mother’s Day.

“My original forecasts for this spring — a slightly cool and wet spring from Northern California northward, and dry and warm south — have largely played out as expected,” Jones wrote. “The rest of April looks generally good as well with some rain north, but frost conditions will remain in the usual places and especially at elevation. As we transition into summer, all evidence continues to point to a warmer and drier than average season across the West.” 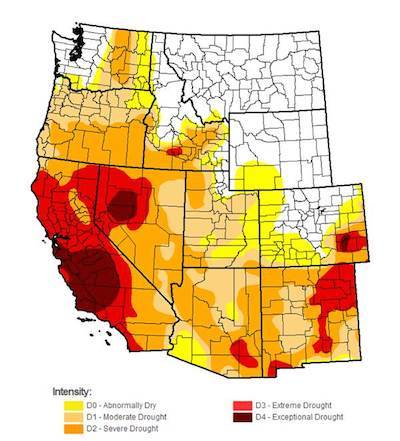 While fears among irrigators have been largely allayed in Washington state, large areas of the West Coast, particularly south of the Willamette Valley, figure to mired in a deep drought for the rest of the 2014 growing season. Conditions seem dire in California, where the scope of its water shortage generates headlines each day.

“Snowpacks across the western U.S. improved some in the northern Cascades but remain very low south into Oregon and California,” Jones wrote. “The April snow surveys are typically the last of the winter, so what we have now is likely to be what water managers have to deal with as we head into this summer.”

Idaho’s Snake River Valley is one of the regions suffering from reduced precipitation, but grape growers said conditions are not as worrisome since a significant portion of their irrigation is driven by western Montana, which has an abundant snowpack.

“Moderate to significant precipitation fell across much of the northern tier of the western U.S. in March with generally greater-than-normal monthly precipitation from Northern California north to Washington and east to Montana,” Jones wrote. “However, much of California across to Texas and up into the Midwest continued to see substantial deficits in precipitation in March.”

Jones pointed to the latest report from the U.S. Drought Monitor, which indicates that approximately 60 percent of the western U.S. can be categorized as enveloped in “a moderate to exceptional drought.”

California remains the driest at 95 percent in “severe to exceptional drought,” with Oregon at 50 percent and Washington at 17 percent. March temperatures along the West Coast didn’t help.

“During March, temperatures across the western U.S. were warmer than normal (1 to 6 degrees) everywhere except eastern Washington,” Jones wrote. “The eastern U.S. remained cooler than normal during March, especially in the upper Midwest and northern New England. While warmer conditions prevailed in March in the West, many cold nights occurred due to high pressure events with clear skies and low humidities.”

While 2014 sees him in more of an administrative role at SOU, Jones told Great Northwest Wine earlier this year that he plans to carve out time to continue serving the wine industry — a role he enjoys. That’s good news. Based on global climate change and the rapid growth of the Pacific Northwest wine industry, Jones’ climate research may be needed now more than ever.

“The 90-day forecast is bolstered by the fact that North Pacific sea surface temperatures (from the coast to the central north Pacific) remain warmer than they have been for few years now. Furthermore, while the media has played up a possible transition to El Niño conditions later this year (fall into early winter), the tropical Pacific remains ENSO-neutral (La Nada) for now without any additional influence to this spring/summer.

“If the El Niño conditions do materialize later this year, the western U.S. would typically see a transition to a wetter and warmer California south and a drier/warmer PNW. The timing of the onset is important for the western U.S., with any impact likely being pushed into the post-harvest period.”