Washington vineyards get through winter unscathed 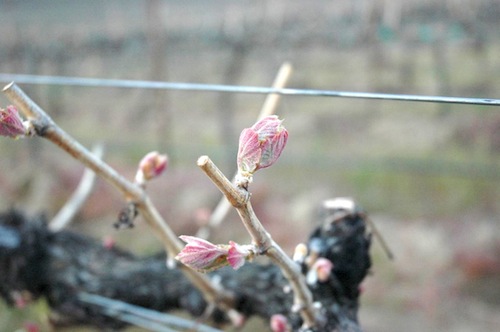 Tiny leaves poke out of buds in Washington’s Horse Heaven Hills. Bud break marks the beginning of each vintage’s growing cycle, and it is right on track with long-term averages this year in Washington. (Photo by Andy Perdue/Great Northwest Wine)

As tiny leaves poke out in vineyards across Washington’s Columbia Valley, grape growers are beginning to assess how their vines fared during a sometimes cold winter.

For the most part, everything looks great.

“We didn’t have any big challenges this year,” said Debbie Hansen of Cougar Crest Winery in Walla Walla. “It was the first year in a long time when we didn’t go below zero. We were pretty fortunate.”

On Red Mountain, bud break is occurring on schedule, and there is little to worry about, said Patricia Gelles, owner of Klipsun Vineyards.

“From our perspective, we’re in pretty good shape,” she said. “We’re hoping for another excellent year, and so far the weather is doing its thing. There is no winter damage that we can tell so far.”

Gelles said she will have a much better idea in three to four weeks, when all of her vines are fully leafed out.

On the Wahluke Slope, the vines also appear to have come through winter without issue.

“We’re looking at a normal crop,” said Jason Schlagel, director of viticulture for Milbrandt Vineyards. “The coldest we got was zero, and the vines were good and hardened off by then.”

Kevin Corliss, who oversees viticulture for Ste. Michelle Wine Estates, said he has seen little winter damage in the company’s estate vineyards as well as Washington vineyards it contracts with growers. However, he has noticed a trend that seems to come up annually.

“We’re starting to see a pattern with Syrah that it doesn’t matter what the winter is like,” he said. “We see 5 to 10 percent dead buds. It’s not worrisome at all, but it seems to be a year-in, year-out issue.”

Aside from that, he expects a normal crop.

“It is right on schedule according to our averages in Washington,” he told Great Northwest Wine. “We’re looking to be within one or two days of the long-term average. We’ll typically see something starting to break in the first 10 days of April, and here we are. The weather has been tremendous for the past week or so. Rather than dragging out, we’re seeing uniform bud break so far on the early varieties. It bodes well for 2014.”

Frost concerns loom for next 4 weeks in Washington vineyards 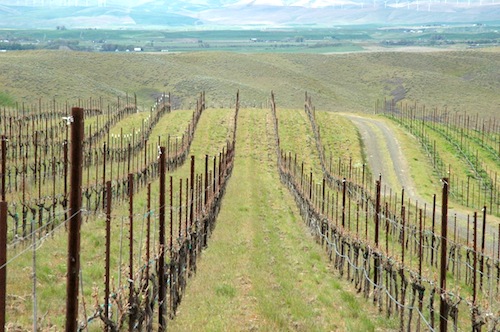 Vines in a Walla Walla Valley vineyard appear to be dormant, but up close they are beginning to push leaves out of their buds, marking the beginning of the annual growing season. (Photo by Andy Perdue/Great Northwest Wine)

The next four weeks will be critical, however. Traditionally, Washington grape growers begin to breathe easier about spring frost damage as soon as Mother’s Day passes – this year, it’s May 11 – and that has not changed.

“We were at 32 on Sunday night,” Hansen said. “But the wind machines kept it in control.”

In past years, she has seen frosts right into the second week of May, so she is not letting down her guard on her 60 acres of grapes and 65 acres of apples.

“We have another month to be on our toes,” she said.

“Every day we get closer to Mother’s Day is a good thing,” he said. “Historically, spring frost is the danger for the next four weeks, and Mother Nature can always throw you a curve ball.”

Kent Waliser, general manager of Sagemoor Vineyards north of Pasco overlooking the Columbia River, said he worries when the temperatures get much below 32 or 33 degrees, but growers are usually prepared to battle frost this time of year.

“It doesn’t take much to burn those tender leaves,” he said. “You have to be pretty diligent.”

On Sunday night, temperatures dropped below 30 at Sagemoor.

“It was enough to wake you up and make you go turn your fans on,” he said.