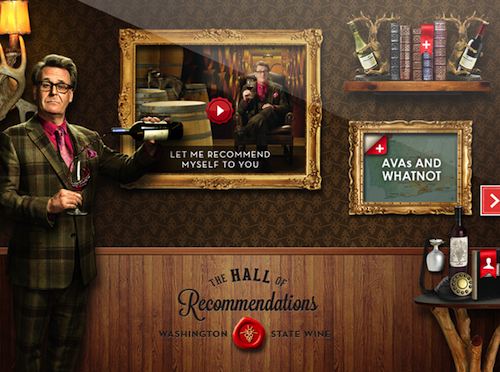 The Recommendeuer iPad app is being promoted as a tool for restaurateurs, writers and retailers.

SEATTLE – The latest love letter “From the desk of The Recommendeuer,” the Washington State Wine Commission’s playfully avant-garde marketing character, opened with the greeting “Dearest Dear” and came sealed by the commission’s signet.

It arrived in the post as a formal, yet comical, announcement that his employers have released an update (1.4) to their entertaining and engaging campaign to promote the United States’ second-largest wine producer via their award-winning iPad and iPhone application.

In the app-filled world of computers, this could be considered version 2.0 of The Recommendeuer, aka California actor/comedian Greg Proops. He remains entertainingly pretentious and snooty. Think of Niles Crane in a three-piece plaid suit.

For wine nerds, perhaps the juiciest updates are found within the Grapes of Math tab. That includes the 2013 harvest report, showing the 12 percent growth (a record 210,000 tons) and Cabernet Sauvignon’s historic overtaking of Chardonnay as the state’s most-produced grape. There’s also the addition of 58 wineries, giving Washington state an official total of 818 wineries.

“The new content presents an even more detailed overview of our wine regions,” Steve Warner, president of the Washington State Wine Commission., said in a news release. “App users can look up specific vintages, access real-time weather information and plan a trip to wine country. And those who love Greg Proops will enjoy the outtake video.”

Those include Proops, while lounging with a glass of red in ‘Rocking the Farm to Table Nirvana’ video, blurting out, “We haven’t had lunch yet, and I’m starting to get (expletive) up.”

Since its launch last fall, The Recommendeuer has racked up 10 awards from three advertising campaign competitions, including the American Advertising Awards. Two videos — ‘Pairings’ and ‘Varietals’ won a silver and bronze awards, respectively, in the Use of Humor category for the Telly Awards, which recognize film and video productions.

“We’re honored to receive such recognition,” Warner said. “Our goal with The Recommendeuer was to provide an educational resource that simultaneously stretched creative boundaries. The response to the app has been overwhelmingly positive.”

For those in the upper-crust of the wine trade, The Recommendeuer went so far as to include a plaid screen cleaner — not a piece of his three-piece suit — to help tidy up his visage on the iPad screen. He suggested the cloth also could be used as a ferret cape.

There are several subtle, quirky touches to the app. For example, if you tap the icon of Ricky Raccoon, whom The Recommendeuer says “took his own life when he was forced to drink a wine from another state,” the critter growls.

The Washington State Wine Commission represents licensed wineries and wine grape grower in the state. Its appointed board and support staff provides a marketing platform to raise awareness and demand for Washington wines. It is funded almost entirely by the industry through assessments based on grape and wine sales, and the commission was established by the state Legislature in 1987.

Proops’ fans can catch his standup act in British Columbia on June 6-7 on his way back to Hollywood after the European leg of his tour.