SPOKANE, Wash. – This weekend, Latah Creek Wine Cellars will hold its annual Mother’s Day celebration, which means matriarch Ellena Conway will be busy preparing dishes for customers to enjoy, just as she has for three decades.

And as is her custom, she’ll gladly share her delectable and approachable recipes, but she’ll be even happier if you pick up her latest cookbook for $25 at her Spokane tasting room.

“It’s really been a good tool for me,” Conway said. “Over the years, we’ve done so much with special events, spring barrel tastings and during the holidays at Latah Creek. We typically have four or five tables available with samples of food to pair with the wines being offered, and people are always wanting the recipes.” 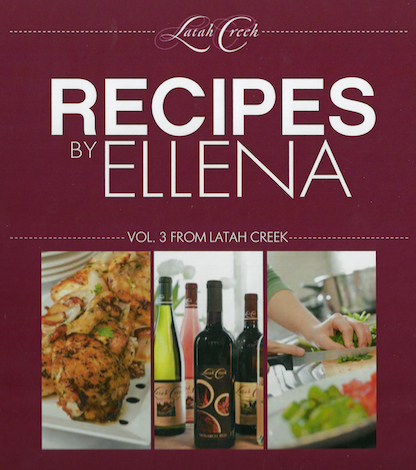 Few in the Pacific Northwest embrace the concept that “wine is food” better than Conway, and that can be sensed on virtually every page of Recipes by Ellena, Vol. 3 from Latah Creek, her latest presentation of deliciously approachable food-and-wine pairing recipes.

She signs copies of the book, in a handy and sturdy three-ring binder, with her slogan of “Eat simple. Eat well.”

“I’m a working woman, and I love to eat great food every day,” said Conway, who co-owns Latah Creek with her husband, Mike, and works with their daughter — Natalie Conway-Barnes. “I love good food that is easy to prepare and doesn’t take really difficult to find ingredients.”

This year, Ellena and Mike will celebrate the 32nd anniversary of Latah Creek, which they have operated together from the start. Ellena, however, has been developing and adapting her recipes since they were high-school sweethearts. She’s enjoyed the research, which began overseas during the Vietnam War.

“Mike chose to enter the Air Force after learning his draft number was something like 3,” Ellena said.

One of the charming aspects of her cookbooks is that she shares the stories behind some of the recipes, such as Cracked Pepper Steak.

“We ate this amazing meal at a restaurant while visiting Istanbul,” she wrote. “We enjoyed it so much, we went back to the restaurant three nights in a row. The steak dinner was prepared tableside, so by the end of the third night, we had the ingredient list down pat.”

Regarding the wine pairing, Ellena noted, “At that time, we only drank Mateus Rosé, but today we enjoy this with our Merlot, Monarch Red or Chardonnay.”

The references to Italy are many in Volume 3.

“I love that cuisine, and it’s probably my favorite country, although I do love Portugal, too,” she said. “They make it so simple. I don’t love spending hours cooking — and everyone eats it in about 20 minutes anyway.”

Contributions from other members of the family are easy to find in Vol. 3. For example, there’s Mike’s Butter Lettuce Salad and Mike’s Favorite Spinach Salah, both of which pair with their Ellena-Ellena — a $12 bottling of Cabernet Franc. Entries attributed to Natalie include her 40-Clove Garlic Chicken, which can be enjoyed with Chardonnay, Ellena said.

“It’s garlicky, but it’s a good Italian recipe,” she said.

There’s a plug for barbecue sauce from Spokane’s historic Longhorn Barbecue, which is nearby, and her recipe for Baby Back Ribs includes a clever way to save the stock. She also gives credit where credit is due by citing recipes have been adapted.

One of the more fascinating features of her recipe book are the various styles of sangria that she promotes. Many winemakers loathe the idea of their wines being blended in such a way.

“Perhaps we just look at wine differently,” she said. “We will serve sangria at the winery in the summer, and especially for our (winery) anniversary. In the past, we’ve used Sangiovese, but now we make it with the Ellena-Ellena.

“It’s a fun thing and very easy to do, and it’s a great thing to have on the dock at the lake,” she continued. “There’s also a recipe for a hot spiced wine. I can’t even begin to tell you much we sell during the holidays, and it’s important to remember that the sangrias and the spice wine aren’t going to be good if you don’t use good wine.”

Their lifestyle as winery owners, parents and serious golfers is not one conducive to meals that require hours of preparation and trips to specialty markets, so Conway’s recipes reflect a simpler approach.

“I’m just a working woman all geared toward that idea that I need to go home and feed your family and do it in a wonderful way,” she said.

And Conway notes which recipes are gluten-free and suggests modifications to those that include gluten.

“The one thing we try to do in the tasting room is that we only sell food products we actually use and we’ve developed recipes around them,” Ellena said. “The hummus we use here is from Robert Rothschild. They were gluten-free and kosher before they were popular things to do. We have a lot of customers who ask for gluten-free products, and both of my granddaughters are lactose- and gluten-intolerant.”

Latah Creek’s annual ranges between 13,000 and 16,000 cases, and their conservative approach with a regional focus allowed the Conways to weather the Great Recession. The successful gift shop in the tasting room also has made a difference.

“I’ve done two other cookbooks, but they weren’t done with a three-ring binder,” she said. “This was the type of project that we wanted to do from the beginning, it’s just 10 years later than we wanted.”

Her first project, counting reprints, resulted in 5,000 copies, and Latah Creek plans to reproduce both of the earlier volumes in the same format. 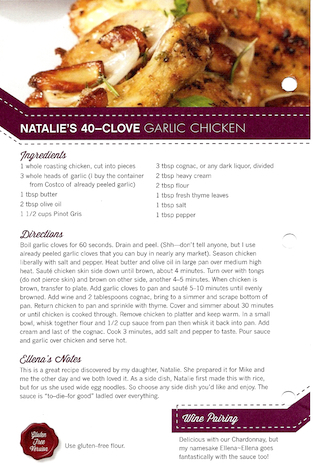 “The next reprint will be a sage green color, and we hope to have that available in July in time for our 32nd anniversary,” she said. “Then, we’ll do the other volume in a tan color and have it by Christmas 2014.”

However, longtime customers who are well-organized foodies could have avoid buying the cookbook if they asked for and kept Conway’s recipes that she shared during special events, within her newsletters or via the Latah Creek wine club over the years.

“We’ve always printed out recipes for people, and now they can put them in their book if they wanted to,” she said. “We include recipes and share them with our wine club, pairing them with the wines they are having with that shipment, and now these will be printed for them in the same format if they bought the book. We’ve done this as part of our effort to provide the best customer service as possible.”

The transition of the winery into Natalie’s hands slowly continues. She takes on more of the winemaking duties from Mike, while Ellena is gradually dialing down her hours managing the finances and their popular tasting room near the Spokane Valley Mall.

One expects to see a Vol. 4 by Ellena in the next few years.

“There are just so many more great recipes that I have that aren’t in any of the cookbooks, so more are still to come,” she said.