FRIDAY HARBOR, Wash. – In this week’s episode of the Great Northwest Winecast, we travel to San Juan Island and catch up with Chris Primus, winemaker for San Juan Vineyards.

Chris was going to be a chemical engineer until he took a wine appreciation class at Purdue University in Indiana and became entranced. A year later, he was going to grad school at the University of Washington in Seattle when he met one of the founders of Associated Vintners, which later became Columbia Winery in Woodinville.

He also was profoundly influenced by the World Trade Organization protests in 1999 in Seattle, an event that ultimately help push him on the path toward being a winemaker.

Here’s our interview with Chris: 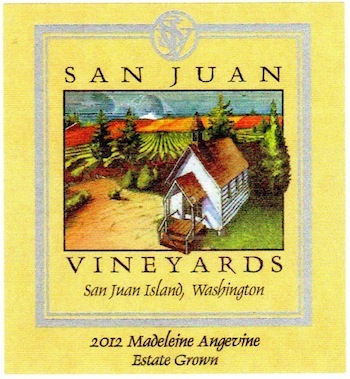 After earning his master’s degree, Chris went to work for Columbia Winery, then headed to the Willamette Valley, where he learned how to make Pinot Noir. He later answered an advertisement to come to San Juan Vineyards in 2006, where he has been head winemaker ever since.

In this interview, he gets into aromatic whites he makes at San Juan Vineyards, including Siegerrebe and Madeleine Angevine, wines he believes are beautifully expressively because they are made in the Puget Sound AVA.

Here are links related to this podcast:

Subscribe to the Great Northwest Winecast in the Apple iTunes store.