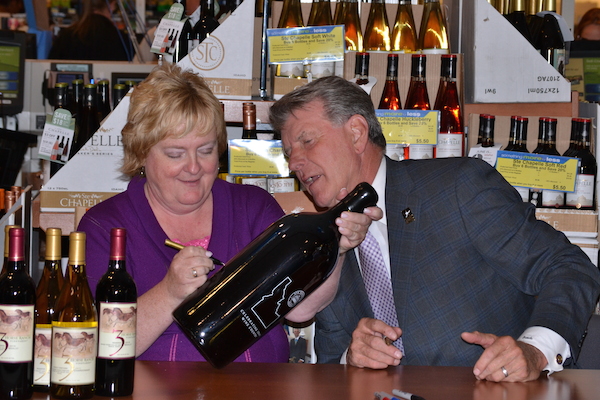 Idaho Gov. Butch Otter watches Ste. Chapelle winemaker Maurine Johnson as she adds her signature to a bottle signed by the governor during last year’s event in Boise. (Photo courtesy of the Idaho Wine Commission)

BOISE — Idaho Gov. Butch Otter will be shaking hands and signing bottles Wednesday in Boise as he renews his role as cheerleader for Idaho Wine Month.

“We feel really lucky that he’s willing to do it for us,” said Moya Dolsby, executive director for the Idaho Wine Commission. “He’s a hoot. He’s very charismatic, really nice to talk to and very approachable. People really seem to have a good time.”

Otter, who served three terms in Congress, will be signing from 1 to 1:30 p.m. at the Parkcenter Albertsons in Boise, and wineries expected to be represented at the event include Cinder, Indian Creek, Ste. Chapelle, Sawtooth and 3 Horse Ranch.

Last spring, Dolsby started by collaborating with Hayden Beverage Co. on recruiting Otter to help with the promotion. Hayden, with warehouses in Coeur d’Alene and Boise, is the state’s largest distributor.

“We just asked him if he would do it,” Dolsby said. “It was that easy, but I’m not surprised. We kind of hit him on both sides — one being a state agency and the other because it’s an agricultural business. More people are seeing the dollars that are behind the wine industry in Idaho, and we are bringing money into the state.” 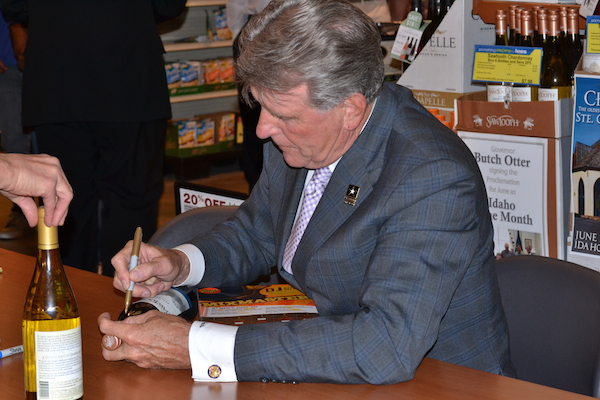 At the same time, Dolsby and her marketing director Sara Dirks continue to sell out their signature event Savor Idaho. The four-hour, afternoon event will be Sunday at the Idaho Botanical Garden in Boise, and it is has been filled for each of its six years. The forecast calls for a high of 84 degrees.

“We sold out two weeks in advance again, but I was hoping to sell out a little earlier,” Dolsby said with a chuckle. “There will be people holding up signs outside looking for tickets, and they are posting on Craigslist and Facebook. It is fun to see people trying to beg for tickets.”

When Dolsby was hired to take over the Idaho Wine Commission in 2008, she immediately went to work on creating Savor Idaho, a consumer event modeled after Taste Washington. Her success with Savor Idaho is not surprising considering that she served as events manager for the Washington State Wine Commission before taking the Idaho position.

More than half of the 50 wineries in the state will be represented Sunday, and while most of the pourings and winemaker dinners surrounding Idaho Wine Month are based in the Treasure Valley, other regions have scheduled special tourings.

Adding to the buzz is the launch of a new winery, Lindsay Creek Vineyards in Lewiston, created by farmer/brothers Art and Doug McIntosh. They’ve already attracted the attention of rockstar sommelier Ian Cauble.

Lindsay Creek joins Clearwater Canyon Cellars and Colter’s Creek Winery to give this historic corner of Idaho three wineries, with 10-year-old Basalt Cellars in Clarkston, Wash., just across the river. The wineries have banded together to file a petition with the federal government for the establishment of the Lewis-Clark Valley American Viticultural Area.

Back in the Snake River Valley, the current issue of Treasure magazine, a publication of the Idaho Statesman, includes a profile on restaurateur Greg Leitner, who has turned his group’s Outback Steakhouse in Nampa into a full-fledged promoter of the Sunnyslope Wine Trail. Neighboring winemakers applaud Leitner for working on their behalf, pushing beyond the formula of an established national restaurant chain and doing it within a religiously conservative community.

“He fully embraces the Snake River Valley wine region and takes pride in showcasing local wine,” Dolsby said. “We are so grateful to Greg and his team for what they have built here and hope more restaurants will continue to build their local wine list.”