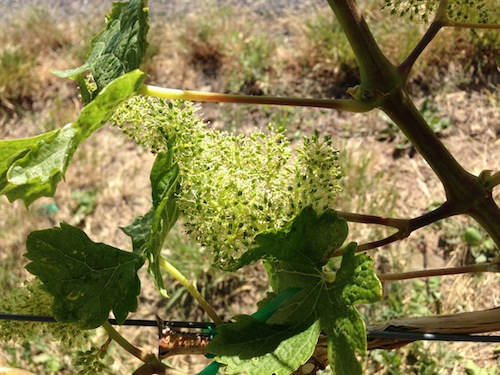 ASHLAND, Ore. — The Pacific Northwest wine industry continues to deal with a 2014 growing season that is tracking in Willamette Valley and Southern Oregon vineyards ahead of the near-record warm vintage of 2013.

“In summary, all evidence continues to point to a warmer and drier than average growing season across the West,” climatologist Greg Jones noted in his latest update released Saturday.

The Southern Oregon University professor pointed to the Climate Prediction Center’s 90-day forecast, which indicates “strong odds” of warmer than normal and seasonally dry conditions over the West. He added, “the only question being the pattern of summer monsoon rains, which could impact parts of southern California.”

Grape growers and winemakers in Washington, Oregon and Idaho will remember it was the cool and wet tail of Typhoon Pabuk in late September — described by Jones as “an extremely rare event” — that interrupted a remarkably early harvest and likely avoided record-setting totals for growing degree days (GDD) throughout the region.

“Temperatures during May across the western U.S. continued where April left off with generally warmer than normal conditions (2 to 6 degrees or more), especially within the wine regions in the western and central valleys of California, western valleys of Oregon and across into eastern Washington,” Jones reported. 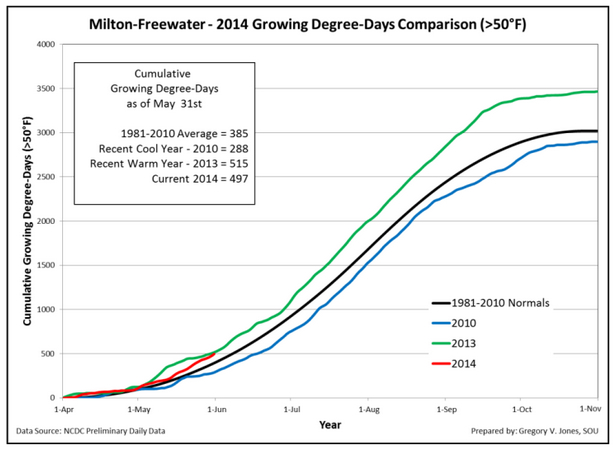 And the GDD index for each of the four wine country reporting stations Jones highlights — Milton-Freewater in the Walla Walla Valley, McMinnville, Roseburg and Medford — are above the 1981-2010 average and in record territory. 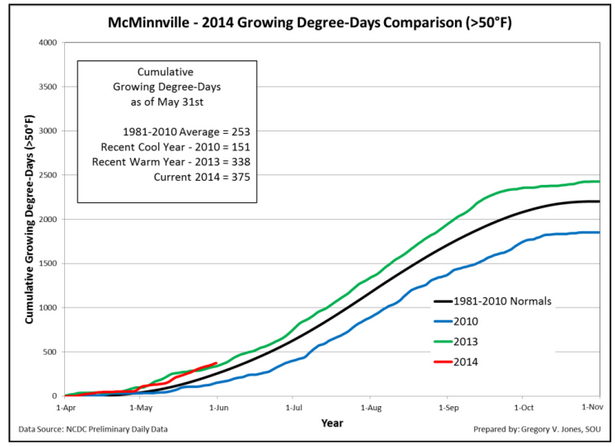 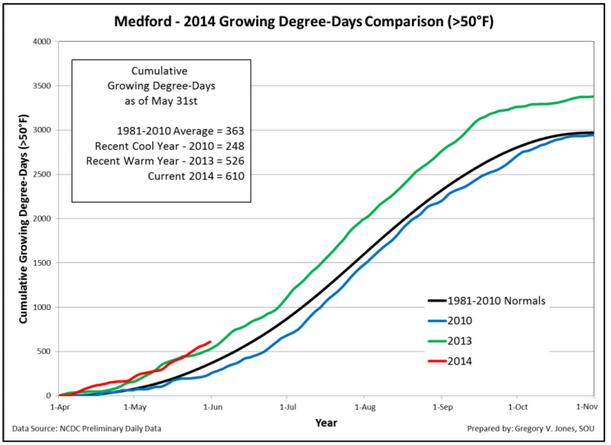 Year-to-date precipitation is up 5 percent in McMinnville, but it is down 10-20 percent for the Walla Walla Valley, Roseburg and Medford.

The forecast for Oregon and Washington vineyards during the next two weeks calls for a bit of cooling and likely dry conditions west of the Cascades.

California’s water shortage problem only worsened during the past three months as the state was nearly 3.5 degrees warmer than average. Another sign of Southern Oregon’s drought was a recent Associated Press report that one station at Crater Lake National Park recorded the snowpack as 6 percent of normal.

“The tropical Pacific continues its transition from La Nada toward El Niño, with the Climate Prediction Center increasing the likelihood of El Niño developing into the late summer or fall,” Jones wrote. “However, there remains uncertainty as to exactly when El Niño will develop and an even greater uncertainty as to how strong it may become.

“If the El Niño conditions do materialize later this year, the western U.S. would typically see a transition to a wetter and warmer California and a drier/warmer PNW,” he continued. “The timing of the onset is important for the western U.S., with any impact likely being pushed into the post-harvest period.”