Safeco Field is home to the Seattle Mariners. In July, the Mariners and Major League Baseball will offer two wines made by Maryhill Winery. (Photo via Flickr/click for credit)

GOLDENDALE, Wash. – The Seattle Mariners and Maryhill Winery hope to have a hit on their hands with the two newest wines in the Major League Baseball collection.

By mid-July, a Mariners Red and Mariners White should be available in greater Seattle area retailers, according to Major League Baseball and Maryhill Winery.

Craig Leuthold, owner of Maryhill Winery, told Great Northwest Wine that the wines are bottled and awaiting label approval from the federal government – a process he expects will be completed in the next week or two.

A Major League Baseball representative in New York said the league began working with Wine By Design in Napa, Calif., about a year and a half ago to select and feature certain teams around the league. It released two sparkling wines to celebrate the San Francisco Giants’ 2012 World Series title. The wine, made by Mumm Napa, was produced in tiny amounts – just 2,012 bottles (170 cases) were made available.

Wine By Design also has come out with wines for the New York Yankees. Under the Yankees label, two of the wines are from California, but a dry Riesling comes from New York’s Finger Lakes region.

A Cabernet Sauvignon also was produced for last year’s All-Star Game, which was held in Queens, New York. And the Texas Rangers also have two wines, both using California grapes.

Major League Baseball told Great Northwest Wine that other teams getting a wine soon include the Philadelphia Phillies and Chicago Cubs. 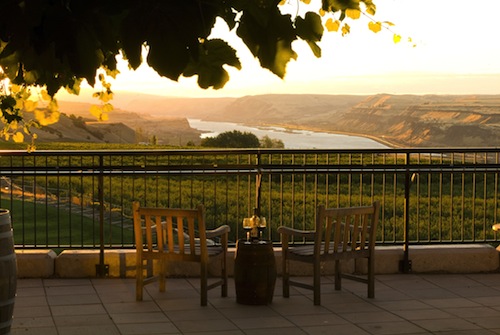 Leuthold said this is not the first time Maryhill Winery has worked with an outside group to produce a special wine. The winery also works with Rosauers supermarkets on a private label, as well as a few restaurants and lodges in Washington state. The winery also  creates private labels for families celebrating birthdays and anniversaries.

The Mariners wine is a bit different, however, because all the wine will be shipped first to Southern Wine & Spirits, a distributor that will then place the wine with retailers. Leuthold said those decisions haven’t been made, but they could include Costco, Safeway or Fred Meyer.

Leuthold added that if the wine is sold at Safeco Field, the home of the Mariners, it would be in the suites or the restaurant.

Maryhill is a 75,000-case winery perched atop basalt cliffs overlooking the Columbia River, about 90 minutes east of Portland.

Leuthold said he is ready to ramp up production on the special Mariners wines as the demand grows, and he wouldn’t be opposed to his winemaker, Richard Batchelor, throwing out the first pitch at a game. However, Batchelor is from New Zealand, so he’s not a huge baseball fan.

“Richard is more of a rugby guy,” he said with a laugh.