Globally recognized climatologist Greg Jones shared data through June 30 indicating the 2014 Pacific Northwest wine growing season is running much as 50 percent ahead of the 40-year average.

Jones, whose title is now director of Southern Oregon University’s Division of Business, Communication and the Environment, issued his latest update on the eve of the Independence Day weekend.

“In Oregon, temperatures in McMinnville, Milton-Freewater, Roseburg and Medford ranged from 0.8 to 2.1°F warmer than average, leading to 2014 growing degree-days that are similar or slightly above the 2013 values on this date,” Jones wrote. “All four locations in the attached plot are running 25-50% above their long-term average for the first three months of the growing season.” 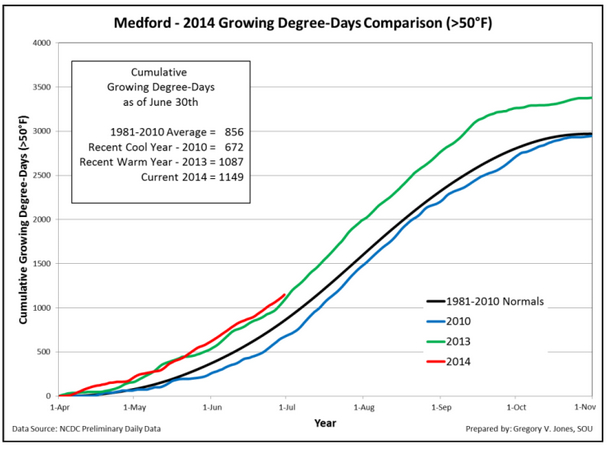 The most extreme report from Jones’ four wine-country weather stations came from the Rogue Valley town of Medford, where there were 1,149 growing degree days by June 30. That easily surpassed the recent warm year of 1,087 GDD from last year and well beyond the 1981-2010 average of 856 GDD. 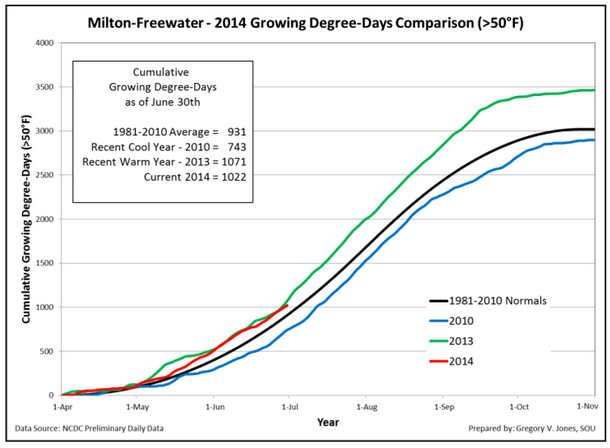 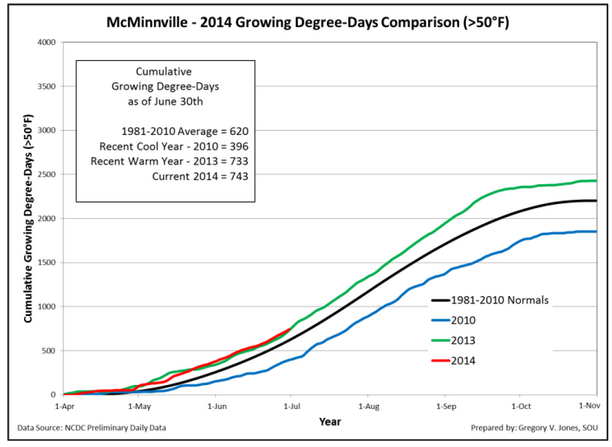 Pinot Noir producers in the Willamette Valley can look to the McMinnville data, which recorded 743 GDD. That’s nearly double the recent cool vintage of 2010, when there were just 396 GDD through June 30. Last year’s figure was 733, and McMinnville’s recent historical average is 620.

The Benton City station, just west of Red Mountain, recorded 1,071 GDD, which compares to the 1,004 of last year and six-year average of 856.

Canoe Ridge in the Horse Heaven Hills was a touch better at 1,081 GDD thus far vs. last year’s figure of 1,043. The WSU Tree Fruit Research station in Wenatchee recorded a stunning 1,059 GDD — nearly 100 GDD more than last year’s 970 through June 30.

The Wahluke Slope continues to prove itself as perhaps the Washington’s warmest wine region, indicated by the WSU weather station recording 1,172 GDD. That figure is 31 GDD warmer than the same date in 2013.

However, at Grandview NE, one of WSU’s Yakima Valley stations, hit 851 GDD, which was off of the 872 from last year.

The April-through-June period continued the run of warmer-than-average conditions, Jones wrote, with only a few areas east of the Cascades and Sierra Nevadas being slightly cooler than normal. Wine country in Washington’s Columbia Valley and Southern Oregon remains under drought condition, despite precipitation in the Cascade Range, and the U.S. Drought Monitor’s look at the Pacific Northwest focused on southern Oregon.

“In the rain-shadow of the Oregon Cascades, conditions have continued to decline in the Klamath Valley area,” according to the website. “This area is experiencing its worst drought in 20 years, and the first round of involuntary water shutoffs since 2001 has been implemented.”

Ironically, the East Coast experienced greater than normal precipitation this spring, particularly west of the Great Lakes and along the Gulf Coast.

“The general forecasts for the spring and early summer have largely held true with continued warm and dry conditions in the western U.S.” Jones reported. “Currently, the 6-10, 8-14 day, and 30-day outlooks tilt the odds to this trend continuing with normal to warmer than normal and drier than normal conditions over the West.”

And there’s no reason to believe conditions will change as the Pacific Northwest wine industry builds toward harvest.

“The longer term forecast extended out to 90 days from the Climate Prediction Center forecast is also tilting the odds to continued warm and dry over the West,” Jones said. “El Niño conditions in the tropical Pacific are continuing to develop but are not likely to peak until later in the fall or early winter.”

A strong El Niño likely would not mean a cooling trend for West Coast vineyards, Jones said, but it should provide much-needed precipitation to Southern Oregon and Northern California.

“Only time will tell how this year’s predicted El Niño development will ultimately play out,” Jones said.