Marshall Edwards stands behind some of Washington’s largest vineyards 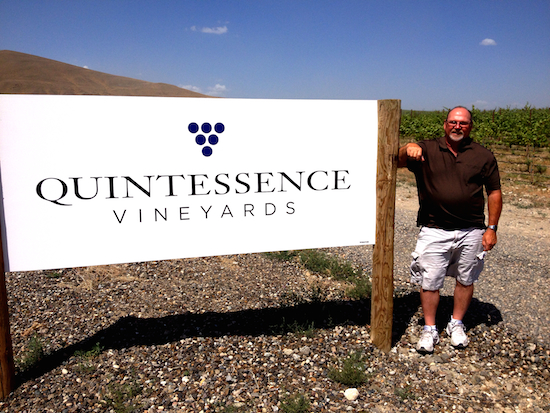 Marshall Edwards has served as vineyard operations manager for Shaw Vineyards and Northwest Vineyard Management since they were created in 2009. (Photo by Eric Degerman/Great Northwest Wine)

BENTON CITY, Wash. — It won’t take long for Marshall Edwards to put a lot of miles and carry around Columbia Valley terroir on his new pickup.

That’s why he quickly lets passengers know not to worry about kicking Red Mountain’s wind-blown loess from their boots when climbing into his cab, which still carries a hint of that new car smell.

“Aw, you’re fine. This thing is going to get dirty,” Edwards said with his ever-present chuckle. “I got a new pickup. My other one was so dirty.”

And while his business card reads “Shaw Vineyards — Vineyard Operations Manager,” his history extends thousands of acres beyond those 98.7 acres on the southwestern slopes of Red Mountain. 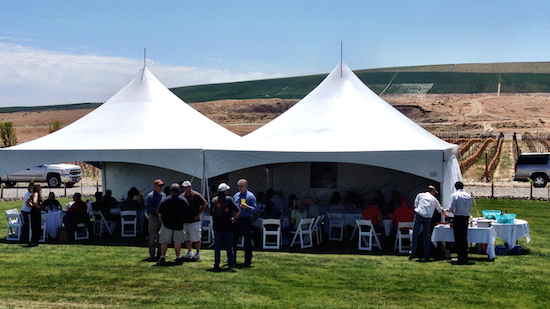 Some of Washington state’s top winemakers meet at Quintessence Vineyards on Red Mountain for an alfresco tasting and lunch. (Photo by Eric Degerman/Great Northwest Wine)

Last month, some of the state’s top winemakers drove from across the state to Red Mountain where they shared stories and samples of young wines they’ve made from Quintessence Vineyards, the big sister to Shaw Vineyards and a part of Edwards’ ever-expanding role with Dick Shaw’s Northwest Vineyard Management company. Their Red Mountain customers include Col Solare, DeLille, Fidelitas, Guardian, Januik, J&M, Mark Ryan, Obelisco, Ross Andrew and Duckhorn’s new brand — Canvasback.

“The Duckhorn guys said, ‘This fruit is fantastic,’ even when it wasn’t grown on a south-facing slope,” Edwards said. “As a farmer, if we don’t screw it up — and it’s pretty hard to screw it up — you can’t get bad fruit off of Red Mountain.” 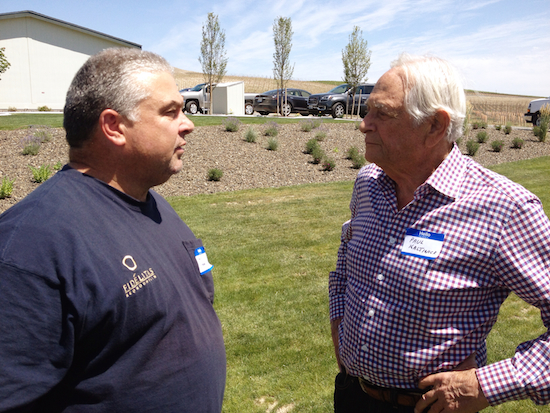 This spring, the expansion of Quintessence along the eastern ridge and slope of Red Mountain continues to command much of Edwards’ attention. Once in production, Quintessence Vineyards — a partnership between Shaw and former J.C. Penney CFO Paul Kaltinick — will encompass 299 acres and factor into even more of the state’s top wines. Their investment in Red Mountain includes the 21st century installation of a charging station for their Teslas.

“They both live in Gig Harbor, and Dick was chairman of the board of a bank in Tacoma. He retired and started farming over here,” Edwards chuckled. “He planted grapes in Mattawa and hasn’t stopped since.

“He said he had a bunch of partners and after he planted 100 acres the first year (1981), he turned around and all the partners were gone and he was stuck with the 100 acres,” Edwards said as he continued to chuckle. “He just kept going and hasn’t stopped planting.”

Shaw partnered with Jack Jones in the Columbia Basin town of Quincy to create J&S Crushing in Mattawa. Their Columbia River’s Edge Winery processes their combined holdings of 2,000 acres in the Basin and Wahluke Slope into nearly 2 million gallons of wine, rapidly making them one of the largest in the state — with Ste. Michelle Wine Estates as a major customer. The winemaking responsibility has been in the talented hands of Victor Palencia from the beginning.

Earlier this year, Shaw and his wife, Wendy, purchased Russell Creek Winery and launched their Henry Earl Estates in Walla Walla. The wines feature fruit from Red Mountain with Palencia as the winemaker. 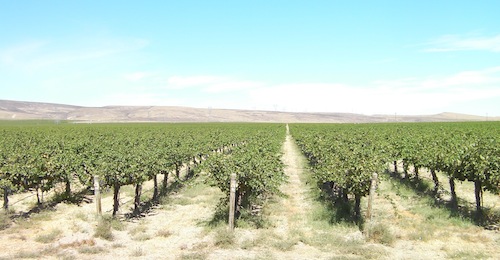 Cold Creek Vineyard is 811 acres and is just south of the Columbia River in Washington’s Columbia Valley. (Photo by Andy Perdue/Great Northwest Wine)

Edwards and his background seem to be a natural fit for Northwest Vineyard Management because he’s spent much of his career playing a significant role at some of Washington’s largest vineyards — while working for Ste. Michelle.

“You know, I’ve never tallied up all the acres,” Edwards said with a chuckle, “but it’s actually been quite a few that I’ve been involved with.”

The 1977 graduate of Prosser High School joined Ste. Michelle in 1991 as an equipment supervisor to work on the planting of Canoe Ridge Estate in the Horse Heaven Hills. That’s 559 acres.

“It was steep country, and I had a lot of experience with Cats and steep country,” Edwards said, who eventually became Mimi Nye’s assistant vineyard manager.

In 2002, he was transferred to Cold Creek Vineyard, replacing the retiring Jim Herrmann as manager and working with Ron Bunnell, Chateau Ste. Michelle’s head winemaker at that time. 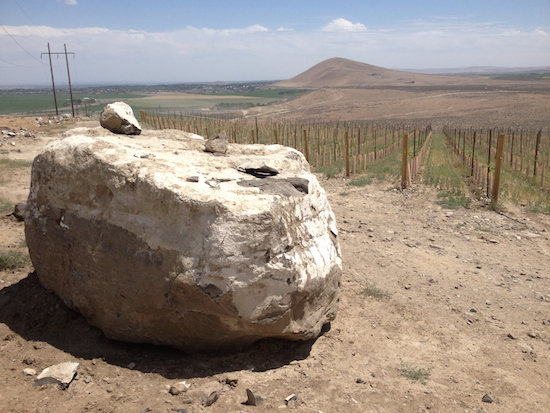 Dick Shaw recruited Marshall Edwards to plant large sites, including Quintessence Vineyards on Red Mountain. Candy Mountain and the town of West Richland are in the distance. (Photo by Eric Degerman/Great Northwest Wine).

Cold Creek, the state’s largest vineyard when it was first planted in 1973, grew from 500 acres to 700 acres while Edwards was there. It has since surpassed 800 acres, making it the largest Salmon-Safe vineyard in Washington. His work at Cold Creek — one of the state’s best sites for Cabernet Sauvignon — attracted the attention of Shaw and his general manager Eric Henriksen in 2009. 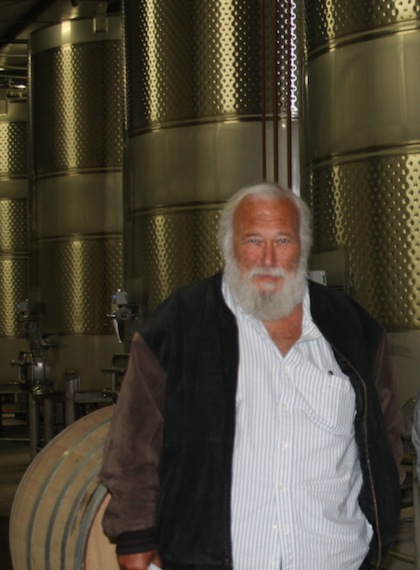 “Dick and Eric came to me about working for them because they had this Red Mountain project started and Shaw (Section) 32 was just getting started,” Edwards said. “I love Red Mountain, and I liked putting in vineyards. When I was at Ste. Michelle, I helped put in the Northstar Vineyard and the new planting at Spring Valley in Walla Walla, so it was really intriguing for me to get a chance to work on Red Mountain and all of this.

“As much as I loved all the people at Ste. Michelle — and my wife still works at Snoqualmie — it was a chance for me to get back to farming,” he added.

His focus on Red Mountain is Cabernet Sauvignon. At Shaw Vineyards, 90 of the 99 acres are devoted to “King Cab.” In Quintessence, first planted in 2010, Cab makes up 240 of the 299 acres.

The atmosphere’s a bit more casual, too. Edwards wore a golf shirt and a pair of cargo shorts while giving tours of Quintessence Vineyards to clients on this sun-baked and dusty day.

“Dick and Paul — they buck the corporate thing,” Edwards said with a laugh.

They also are ambassadors for the region. Earlier this year, Shaw and Kaltinick also agreed to allow a portion of their land near Quintessence to serve as the trailhead for the future Red Mountain hiking trail.

“This is a special area, and we’re looking forward to having more people who want to see our country,” Shaw said. “The more people see it, the more they will want to buy Red Mountain wine. We just opened a new tasting bar in Walla Walla, so after people visit Prosser, we’d like for them to stop by Red Mountain and see the vineyards on their way to Walla Walla.” 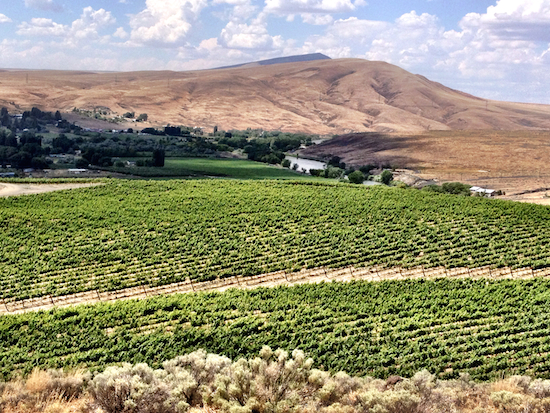 Shaw Vineyards, a 99-acre site east of the Yakima River from Benton City, is dominated by Cabernet Sauvignon (90 acres), with 8 acres of Merlot and 1 acre of Petit Verdot. (Photo by Eric Degerman/Great Northwest Wine)

Work with Northwest Vineyard Management, a company created upon Edwards’ arrival in 2009, goes beyond Shaw’s plantings. Those partnerships include the Acquilini family’s recent winning bid at auction for Aldercreek and Windy Ridge vineyards, totaling 340 acres in the Horse Heaven Hills. The owners of the National Hockey League’s Vancouver Canucks first made headlines in the wine industry last fall with their dominating winning bid at the final Red Mountain auction.

Edwards’ team began its association with those vines in 2012. They also manage Obelisco, a 30-acre vineyard that Shaw and Kaltinick split evenly with another Gig Harbor businessman, Doug Long of Obelisco Estate.

“Dick and Paul partnered together on Quintessence, while Shaw 32 is just Dick’s,” Edwards said. “Obelisco is a third each with Dick, Paul and Doug. Doug’s third goes to the Obelisco Estate label, while Dick and Paul sell the rest to folks such as Mike Januik and other wineries.”

There’s also Shaw’s vast 1,200 acres on the Wahluke Slope and a new project along the Yakima River just outside of West Richland.

“I have Bob Brown manage the vineyards on the Slope,” Edwards said. “I have a hard time spending a lot of time up there right now with all these vineyards going in on Red Mountain and the 1,000 acres going in at Horn Rapids.” 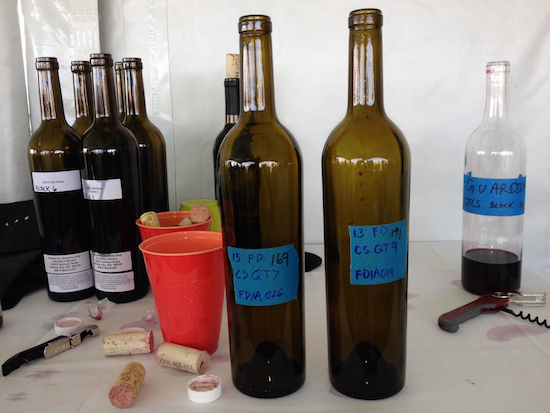 Barrel samples from Col Solare, Fidelitas and Guardian were among those poured at the June 12, 2014, tasting at Quintessence Vineyards on Red Mountain. (Photo by Eric Degerman/Great Northwest Wine)

This year, 200 acres of primarily Cabernet Sauvignon will be planted as part of a production vineyard essentially overlooking Horn Rapids Dam. The red Bordeaux variety — particularly clone 8 — continues to be a focus of Shaw for his vineyards on and near Red Mountain.

“I would say 95 percent of what’s planted on Red Mountain is Cabernet,” Edwards said. “At one time, I suggested to Dick that he plant some Merlot and he said, ‘Nope. Red Mountain is Cab.’ And after tasting the Cab that comes off here, I agree 100 percent. Now, if I wanted Merlot, I’d go to the Wahluke Slope. To me, that’s the best Merlot in the state. And the Syrah.”

However, there’s a good chance Edwards will cater to customer requests and plant some Charbono in Quintessence not far from Col Solare.

“It hangs longer than Cabernet,” Edwards said. “It needs a really hot site, so that’s why they want it up on Red Mountain as high as they can get it.”

After all the work that’s already been done, the small block of Charbono seems to be a fascination rather than a nuisance for Edwards. Besides, the job and the tools have changed remarkably since Shaw first recruited him.

“When I started, Dick and Paul never thought we would get that all planted at Quintessence,” Edwards said. “We’d still be at it if we were doing it the way we were 15 years ago — by hand. Now, you can do a lot of it with machines, thanks to some of the innovations that the guys use for putting in the trellis and the irrigation system.”

And by the end of 2014, Edwards will have played a role in more than 3,800 acres of Columbia Valley vineyards.