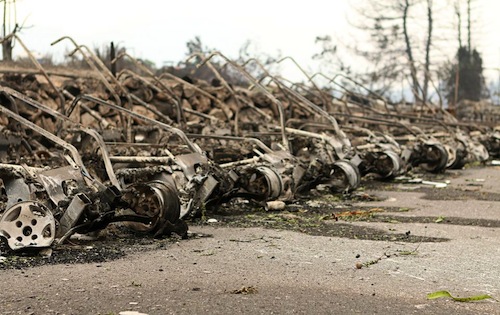 The fire in North Central Washington – largest in state history – has burned more than 380 square miles and destroyed at least 150 homes, according to the Wenatchee World newspaper.

Despite wildfires being an annual occurrence in arid Central and Eastern Washington, grape growers and winemakers say “smoke taint” has rarely been an issue.

“We haven’t seen a lot of it,” said Doug Gore, executive vice president for winemaking, viticulture and production for Ste. Michelle Wine Estates. Gore came to Washington in the early 1980s and has not witnessed anything significant in the past three decades. “We have limited experience, and that’s a good thing.”

Wade Wolfe, who moved to Washington in 1978 to work as a viticulturist for Ste. Michelle and now owns Thurston Wolfe Winery in Prosser, also has not seen a problem.

“I have not seen it in Washington,” he said. “If you talk to researchers in California, you can have a problem with it, but it needs to come later in the season when the fruit is starting to ripen. It also has to be really smoky.”

Mike Sauer, owner of Red Willow Vineyard, worked with winemaker David Lake for decades. He said one Syrah from the mid-1990s was tainted by smoke from a wildfire on the nearby Yakama Nation. (Photo by Andy Perdue/Great Northwest Wine)

Mike Sauer, owner of venerable Red Willow Vineyards in the western Yakima Valley, said he has witnessed smoke taint only one time in his more than 40 years amid the vines. That was in the mid-1990s, when a bad fire occurred on the Yakama Nation reservation about 25 miles away.

“The smoke hung in the valley for a long, long time,” he told Great Northwest Wine. “It smelled like a wood-burning stove.”

Back then, Sauer was growing grapes for Columbia Winery and collaborating closely with winemaker David Lake, who died in 2009. For years after during vertical tastings of Columbia Winery Red Willow Vineyard Syrah, a smokiness became that vintage’s signature, Sauer said.

“David could always pick it out,” Sauer said. “It was not a real negative, but it was identifiable.”

Kent Waliser, general manager for Sagemoor Vineyards along the Columbia Valley north of Pasco and on the Wahluke Slope, is not too concerned about smoke taint this year. He said he was in Wenatchee when the fire blew up last week.

“It wasn’t really smoky until you got up into the Quincy area,” he said. “You could smell the smoke in downtown Wenatchee. You couldn’t see the fire, but you could see ash floating around.”

Waliser said he has not noticed smoke taint in his grapes since he took over Sagemoor more than a decade ago. However, he said bad smoke about three years ago did cause his grapes to ripen more slowly.

“It reduced the heat units because it reduced the amount of sun (reaching the vines),” he said. “Over about 10 days, we noticed some delayed ripening.”

But it didn’t cause any smoke taint in the resulting wines, he said.

Smoke from Washington wildfire not sticking around vineyards 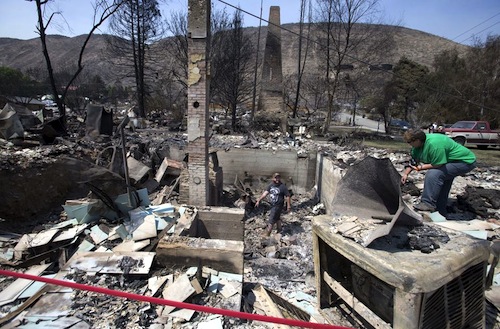 Roger Gamache, who co-owns Gamache Vineyards with his brother Bob, said he has smelled little smoke at his place, which is in northern Franklin County.

“We only smelled it in our area for a couple of days,” Gamache said. “We can see smoke on the horizon, but we don’t smell it here.”

The Gamaches have been growing wine grapes for 34 years in the Columbia Basin and launched Gamache Vintners in Prosser more than a decade ago. Gamache said that even though fires are an annual occurrence and growers deal with smoke regularly, he has never noticed a pronounced smokiness in his wines that didn’t come from other factors, such as barrel aging.

“I haven’t noticed it on our wines, even in the really bad years,” he said.

Even with vineyards nearer to the fires around the town of Pateros, the smoke isn’t too bad, said Ryan Flanagan, who manages Evergreen Vineyard for Milbrandt Vineyards near Quincy.

“It got a little hazy last week,” he said. “But it cleared up pretty well by the weekend.”

Flanagan said the 2012 Wenatchee fire caused thick smoke for several weeks and added this is nothing like that. But he cautioned that it’s still early – and hot – in the Columbia Valley.

“We have a long way to go during fire season.”