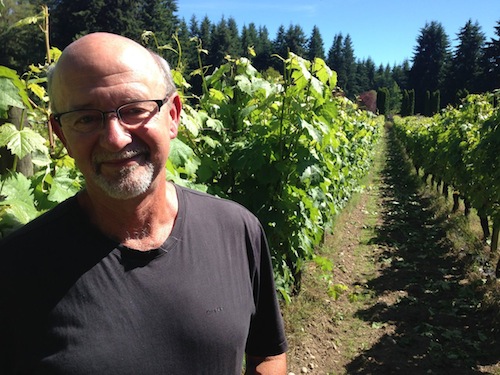 Greg Osenbach, owner and winemaker for Whidbey Island Winery near Seattle, moved to the island in the early 1980s. (Photo by Andy Perdue/Great Northwest Wine)

LANGLEY, Wash. – Greg Osenbach enjoys a good challenge, in fact he thrives on it.

And he gets plenty as the pioneer grape grower and winemaker on Whidbey Island. The owner of Whidbey Island Winery grows grapes that are far out of the wine mainstream, and he puts between 4,000 and 5,000 miles per year on his truck to haul grapes from east of the Cascade Mountains, battling ferry schedules, traffic and other logistics.

But enjoying the idyllic life on rural Whidbey Island makes it all worthwhile, something Osenbach has done for 30 years.

We recently caught up with Osenbach at his winery and vineyard on south Whidbey Island. Here’s the interview: 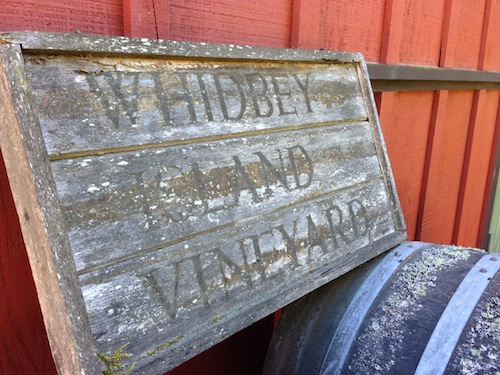 Whidbey Island Winery is a short ferry ride from the Seattle side of Puget Sound. (Photo by Andy Perdue/Great Northwest Wine)

Osenbach arrived here in the early 1980s and soon after began planting such cool-climate white grape varieties as Siegerrebe and Madeleine Angevine, taking cues from grape growers at Bainbridge Island Vineyards & Winery to the south and Mount Baker Vineyards & Winery north of Bellingham.

He chose Whidbey Island because of the climate, which is much less wet than the Seattle area, which is a short ferry ride east.

“We’re on the edge of the rainshadow here, so it’s nice and dry here in the summer,” he told Great Northwest Wine. “We get probably 10 inches a year less rainfall than Seattle.”

Madeleine Angevine is an early ripening white grape whose origins are in France’s Loire Valley. Siegerrebe, meanwhile, is a German grape that is a cross of Gewürztraminer and Madeleine Angevine.

If these varieties were planted in arid Eastern Washington, Osenbach said they would ripen way too early and result in flabby, unappealing wines. They tend to ripen at much lower sugars than more traditional grape varieties, resulting in wines with bright, graceful flavors and blissfully lower alcohols.

And they are perfect for the climate and lifestyle of Western Washington. Osenbach describes Madeleine Angevine as “the ultimate crab wine” and says it fits beautifully into the region.

“These wines are really appropriate to the cuisine of the area,” he said. “They fit.”

Selling white wines with funny names has not always been easy. Osenbach said that in the early days at Whidbey Island Winery, patrons would nearly back across the tasting room when he offered to pour Madeleine Angevine.

“Now, it’s quite the opposite,” he said.

Osenbach has two vineyards on the island, and he uses a band of trusty friends and volunteers to harvest Whidbey Island Winery’s grapes each fall – preferably by the end of September.

“We have a long list of people who want to pick grapes,” he said. “We try not to abuse them too much.”

After three or four hours of picking, the volunteers enjoy a big lunch with lots of wine.

Though he doesn’t grow any Pinot Noir, Osenbach is starting to work with some grown nearby. After a couple of vintages that resulted in rosés, he is pleased with the 2013 vintage, which is in barrel and is shaping up as a really nice wine. He said newer clones of Pinot Noir are making it easier to ripen the finicky grape in the Puget Sound American Viticultural Area.

Straddling both sides of Cascades 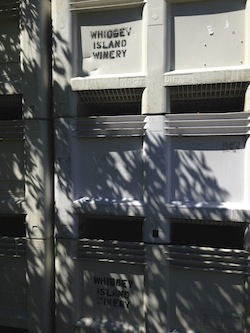 These bins will be dropped at vineyards in the Columbia Valley and return full of grapes during harvest. (Photo by Andy Perdue/Great Northwest Wine)

But local grapes supply Osenbach with only about 30 percent of the fruit he needs for Whidbey Island Winery’s 3,500 cases of wine. The rest comes from beyond the Cascades.

Osenbach is one of the few wineries still making Lemberger, a delicious Austrian red grape that was an early favorite with Washington winemakers. In recent years, however, the variety has fallen out of favor, primarily because of its unfortunate name.

“It makes a great wine,” Osenbach said. “It was one of the first reds I worked with. I have a devoted fan club for it. It’s too bad about the name, but we’re stuck with it.”

Osenbach also loves working with Italian red varieties, particularly Sangiovese, Dolcetto, Primitivo and even the rare and difficult Nebbiolo – “the holy grail of Italian reds,” he calls the noble variety of Piedmont.

He also uses Barbera for his fortified red dessert wine, using a local distiller to produce brandy from his wines.

Getting the grapes from the Yakima Valley, Horse Heaven Hills and Rattlesnake Hills is not a simple task, though it is easier than his compatriots in the San Juan Islands and up on the Olympic Peninsula.

A typical day during harvest starts with Osenbach catching the 4:40 a.m. ferry to the mainland, hauling empty grape bins. He will drop off the bins at vineyards where he will harvest on a future visit, often taking the time to check on the progress of his grapes. Then he will stop at two to three vineyards to pick up harvested fruit and head back west.

Each trip puts 400 miles on Osenbach’s odometer, and he makes 10 to 12 trips a year to the Columbia Valley. 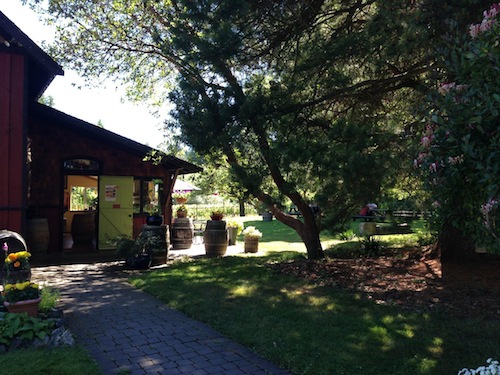 The past five years have not been easy for Osenbach or his fellow Whidbey Island vintners – of which there are about a half-dozen. Between the economy, rising ferry fees and increased traffic in the Puget Sound basin, getting to the island can be a struggle.

But Osenbach does attract day-trippers as well as travelers to the Olympic Peninsula. Even people driving north to British Columbia will hop over to Whidbey Island.

“It’s a more interesting drive going up the island than scooting up the interstate.”

Along with a quiet diversion and some great wines.