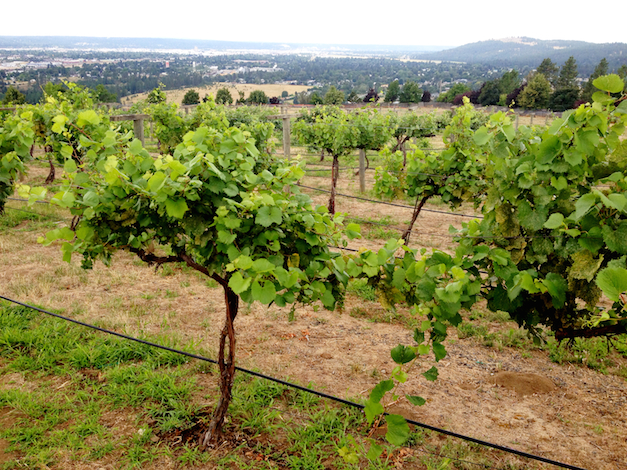 The vines at Arbor Crest Wine Cellars in Spokane, Wash., continue to add growth during the 2014 vintage, which is threatening records as the growing degree days accumulate. (Photo by Eric Degerman/Great Northwest Wine)

Jones, a professor at Southern Oregon University in Ashland, used his weather stations in McMinnville, Medford, Milton-Freewater and Roseburg to show that July temperatures ranged from 4.1 to 5.8 degrees Fahrenheit warmer than average.

“These conditions continued the near-record 2014 growing degree-day accumulations that are similar or slightly above the 2013 values on this date,” Jones said in his report issued Friday to the wine industry. “All four locations in the attached plot are running above their 2004-2013 average (14-24%) and their 1981-2010 average (19-31%) for the first four months of the growing season.” 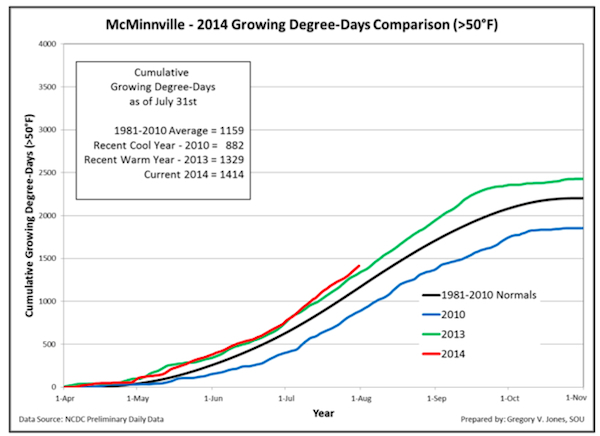 Pinot Noir-producing McMinnville, one of the American Viticulture Areas within the north Willamette Valley, reported 1,414 GDD from April 1 through July 31. Last year, a warm year, the GDD figure through that same date stood at 1,329. The 30-year average from 1981 to 2010 through July 31 is 1,159. 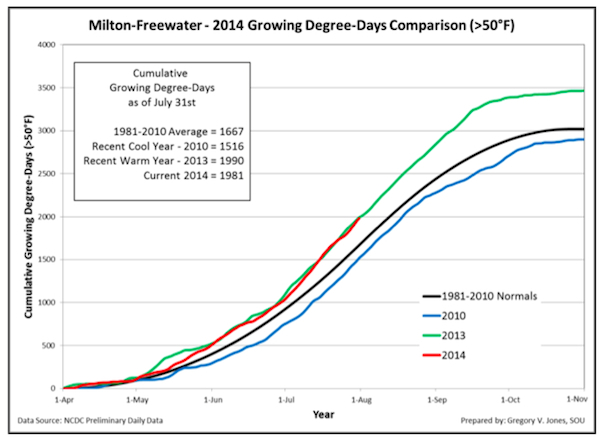 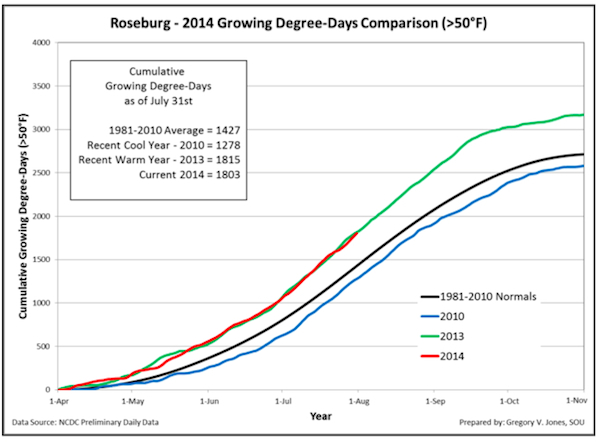 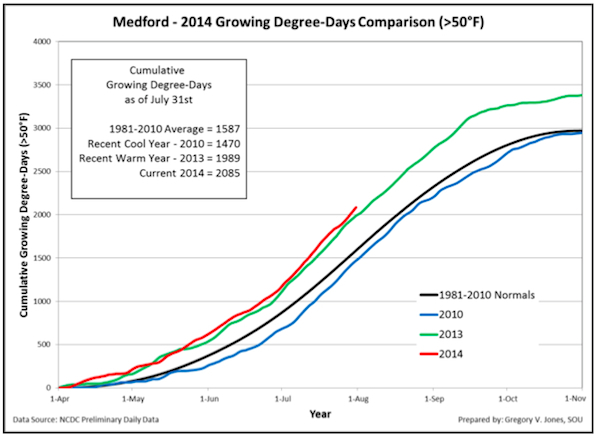 “During July, the United States continued to see the large west-east disparity in temperatures that has persisted all winter, spring and into summer,” Jones said. “Temperatures within the wine regions in the western and central valleys of California, western valleys of Oregon and across into eastern Washington during the month were approximately 2 to 7 degrees above normal.”

Canoe Ridge in the Horse Heaven Hills was a touch better at 1,996 GDD thus far vs. last year’s figure of 1,915. The WSU Tree Fruit Research station in Wenatchee recorded 1,938 GDD — compared with last year’s 1,859 through July 31.

The Wahluke Slope continues to prove itself as perhaps the Washington’s warmest wine region, indicated by the WSU weather station recording 2,166 GDD. That figure is 51 GDD warmer than the same date in 2013.

“Alas, the heat looks to return at the end of the period, as central areas could again surge toward the century mark,” Loyd wrote.

Areas of the Great Basin, the Rockies and the Southwest reported July rainfall as much as 600 percent of normal.

“However, many other regions in California and the west continue to have severe to extreme dry conditions,” Jones said.

August began with a series of widespread thunderstorms in the Pacific Northwest, however, rainfall should not be widespread and temperatures should still remain above normal for the short term, he said.

“Moving into 6-10 and 8-14 day outlooks from the Climate Prediction Center, temperatures in California, Oregon, and Washington are projected to stay above normal,” Jones said. “Rainfall outlooks over the same time period indicate a greater likelihood of dry conditions in Oregon and Washington, while California has some chance of monsoon precipitation, but more likely in the Sierra Nevada eastward into the southwest.

“The 30-day outlook through the month of August shows continued warmer than normal conditions in the West, with precipitation showing no clear signal over the West,” he continued. “My sense is that the increased monsoon flow is not as easy to predict as general patterns of precipitation coming from the West.”

Jones said the the CPC also indicates the onset of El Niño has been delayed, prompted by conditions in the tropical Pacific Ocean. The models suggest a weaker El Niño, too.

“As mentioned previously in this report, El Niño does not have a clear signal over the Western U.S., with weak events not affecting the region much if at all, while stronger events tend to make things warmer and drier in the (Pacific Northwest) and warmer and wetter from the Oregon-California border southward,” he said. “We will need to see the conditions play out over the next couple of months before a better assessment can be made on El Niño influences on West Coast climate this fall and winter.

“In summary, all evidence continues to point to a continued warmer than average growing season across the west with the continued chance for monsoon moisture, but spotty rainfall amounts into northern California, Oregon and Washington,” he concluded.