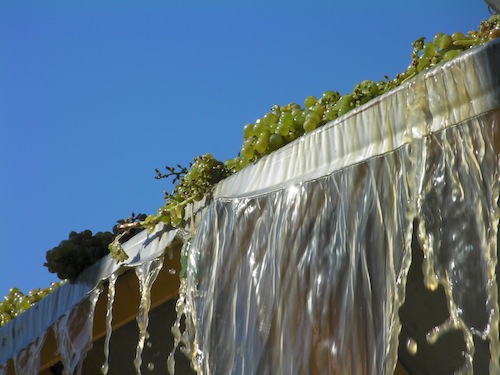 Sauvignon Blanc grapes from Sagemoor Vineyards are crushed at Barnard Griffin winery in Richland to kick off the 2012 harvest. (Photo by Andy Perdue/Great Northwest Wine)

Expect another record year for the Washington wine industry when the 2014 harvest is completed.

“(Harvest is) coming!” said Kevin Corliss, vice president of vineyards for Ste. Michelle Wine Estates. “Everything is getting ripe – and getting ripe rapidly.”

Corliss said the general estimate from his growers as well as others he has talked to indicate this year’s crop will be anywhere from 10 to 12 percent higher than 2013. He cautioned that the estimate was a bit on the conservative side – and estimating crop size is far from an exact science.

Ste. Michelle Wine Estates uses two out of every three grapes grown in Washington wine country, so its needs tend to drive the rest of the industry.

Kent Waliser, general manager of Sagemoor Vineyards north of Pasco along the Columbia River, confirmed that a 10 percent boost in grapes this year is being anticipated by the Washington wine grape industry.

The increase is coming from new plantings, primarily in the Horse Heaven Hills but also on the Wahluke Slope. These are grapes that were planted two to five years ago and are either getting their first crops or are coming into full production. 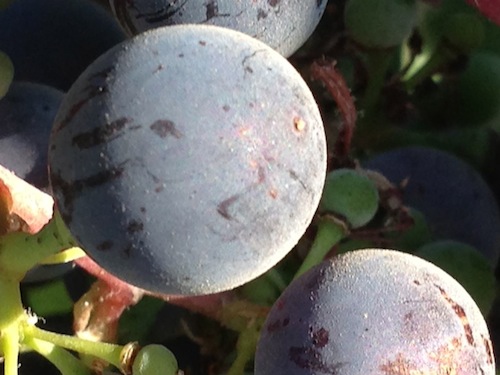 Last year’s record harvest was the second consecutive year that red wine grapes exceeded white grapes in total tonnage in Washington, and that’s also a trend that’s likely to continue, as Ste. Michelle has said its growth is coming from red wine, particularly Cabernet Sauvignon. Last year, Cabernet Sauvignon was the Washington wine industry’s top grape – the first time any red grape took the No. 1 position in the state.

The warm 2014 Washington wine harvest is coming on the heels of the historically hot 2013 vintage, and winemakers anticipate harvest starting soon. Last year, Ste. Michelle Wine Estates harvested Sauvignon Blanc from Upland Vineyard on Snipes Mountain in the Yakima Valley on Aug. 22. While Todd Newhouse, whose family owns Upland, doesn’t anticipate such an early harvest this year because of a heavier crop, Ste. Michelle’s Corliss did think grapes from somewhere in the Columbia Valley will arrive early once again. He suspects Sauvignon Blanc will be picked somewhere between Aug. 22 and 26.

Rob Griffin, owner and winemaker for Barnard Griffin in Richland, has a similar target date in mind.

“Right now, we have our sights on Aug. 25 – which is very early,” Griffin told Great Northwest Wine. “It’s wild.”

Griffin said he spent some time at Sagemoor on Wednesday tasting through the ripening grapes. He gets the grapes from a block of Sauvignon Blanc planted in 1972.

“Last year was crazy early, too,” he said. “The only other time we picked something in August was in 2003.”

Griffin noted that his first harvest – in 1977 when he was at Preston Wine Cellars in Pasco – started in October. He said that while a warming climate trend certainly has pushed ripening forward, so has more enlightened viticulture. Back in the 1970s, ’80s and even ’90s, grape growers watered more heavily, which resulted in larger canopies and heavier crop loads. Today, growers use perhaps half as much water on vineyards as they did just two decades ago.

But regardless of viticultural practices, this is an extremely warm year. As of Aug. 10, Washington State University had measured 1,994 accumulated growing degree days in Prosser. A year ago, it was 1,896 on Aug. 10, and the long-term average by Aug. 10 is 1,719. Growing degree days are a measurement of how much heat is being accumulated.

So far this year, Red Mountain is the warmest area in Washington wine country, followed by the western side of the Wahluke Slope and the Horse Heaven Hills.

Waliser said he couldn’t be happier about how the growing season has progressed.

“Everything looks pretty darned fruitful,” he said. “No winter damage, no spring frost, no disease problems and nice, warm weather. Why wouldn’t we have a good crop?”

He said that in a perfect world, temperatures across Washington wine country would cool, which would allow the grapes to mature more slowly so they can develop more interesting flavors without additional sugar accumulations.

“Growers know how to manage canopies and water,” he said. “We’ve been down this road enough times.”

Griffin agrees. His main concern at this time is that Cabernet Sauvignon on Red Mountain might be ripening too quickly.

One issue with a larger crop is winery capacity.

“That’s why we spend a lot of time estimating crop,” Corliss said. “Historically, we’ve been pretty close. As the year goes on, we adjust our capacity.”

Corliss said he likes to be within 10 percent of his crop estimate – and the production side of the company has flexibility to deal with such variables.

While companies such as Ste. Michelle carefully plan how many tons of grapes they will receive and plan for increases with additional tank and barrel space, smaller wineries don’t have that luxury.

Marty Clubb, owner of L’Ecole No. 41 in the Walla Walla Valley town of Lowden, said his cellar will be full this year and he is in no position to take on additional grapes if crop estimates are even close to accurate. Where additional fruit will go is a good question, he said.

“I guarantee you: Someone will have an issue with capacity.”

Clubb said he is excited by the quality he is seeing from estate grapes at Seven Hills and Ferguson vineyards, both on the Oregon side of the Walla Walla Valley. He anticipates bringing in Sauvignon Blanc from Klipsun Vineyard on Red Mountain first – probably before Labor Day weekend – followed by Merlot from such areas as Red Mountain, Candy Mountain or perhaps Seven Hills.

“Here we are in mid-August, and we’re in full veraison in many places. That’s a really good place to be. We are shaping up to have a very, very good vintage.”