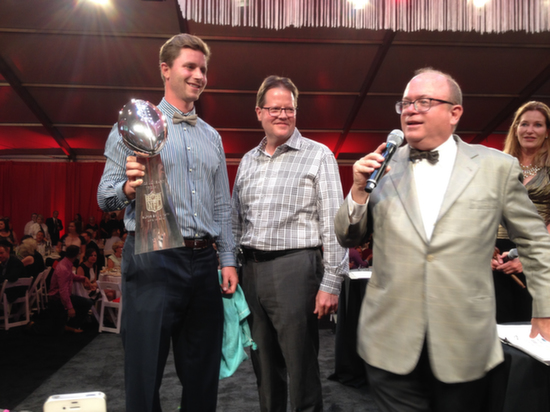 Steven Hauschka, placekicker for the defending Super Bowl champion Seattle Seahawks, is joined on stage, left to right, by Marty Clubb of L’Ecole No. 41 and auctioneers Fritz Hatton and Ursula Hermacinski on Saturday, Aug. 16, 2014. Hauschka’s appearance with the Vince Lombardi Trophy was among the highlights at the Wine Gala, the finale for the Auction of Washington Wines. The three-day event has raised more than $30 million since 1988 for Seattle Children’s Hospital and wine research at Washington State University. (Photo by Eric Degerman/Great Northwest Wine)

WOODINVILLE, Wash. — Steven Hauschka, placekicker for the defending Super Bowl champion Seattle Seahawks, generated the biggest cheer of the evening Saturday at Chateau Ste. Michelle when he unveiled the Vince Lombardi Trophy to patrons of the Wine Gala at the Auction of Washington Wines.

More than 650 winemakers, wine collectors and philanthropists in the nation’s second-largest wine producing state celebrated the auction, co-founded in 1998 by Allen Shoup during his era as CEO of Ste. Michelle. In the subsequent 27 years, the Auction of Washington has raised more than $30 million for Seattle Children’s Hospital and wine research at Washington State University.

On Monday, the Auction of Washington Wines announced that its series of events raised a total of $1.8 million in 2014.

Marty and Megan Clubb, owners of L’Ecole No. 41 in Lowden, along with Seattle Times Publisher Frank Blethen and his wife, Charlene, served as co-chairs of this year’s Auction of Washington Wines.

The co-chairs collaborated to offer wine lovers and sports fans perhaps the marquee experiences at the auction — a Dec. 13-14 weekend package that sold for $31,500 and includes a photo with the Lombardi Trophy, dinner at Wild Ginger Asian Restaurant & Satay Bar with chef Jacky Lo, field passes and four club seats to the Seahawks home game vs. rival San Francisco and an etched double magnum of L’Ecole 2011 Ferguson, which won of Best Bordeaux Blend from Decanter magazine earlier this summer.

Dick and Larry Olsen of Olsen Brothers Vineyards in Prosser were introduced as this year’s honorary growers. Tom and Anne-Marie Hedges of Hedges Family Estates were spotlighted as the honorary vintners.

“Tonight, we’re here to recognize two families who have been outstanding for more than 30 years in viticulture and in winemaking,” said Ted Baseler, President and CEO of Ste. Michelle Wine Estates. “These nominees were selected among their peers.”

After graduating from the University of Washington, the Olsen brothers teamed up in 1972 to begin farming, and their wine grape empire spans 1,041 acres, 23 vineyard sites, 22 varieties and 26 winery clients. Dick, a former newspaperman, would become a founding member of the Washington State Wine Commission.

“In our second meeting, we tried to figure out what we might do raise the awareness of all Washington wineries,” Dick Olsen said. “Allen Shoup, in his brilliance, said, ‘Let’s have an auction. Let’s have a party.’

“After Allen decided to retire from Ste. Michelle, Ted Baseler took it over and in his generosity and through the resources of Ste. Michelle has continued this to care for people who could not care for themselves at Children’s Hospital,” Olsen continued.

“This has been a great 28 years, and we couldn’t have done it without a great industry,” he said. “We kind of lucked into it. I was unemployed, and that was a great motivator.”

The evening began with a tribute to the late John Anderson, who in 1980 began to establish 80 acres of vineyards in Grandview and became a key figure in the state wine commission and the Washington Association of Wine Grape Growers. Anderson, died earlier this year at the age of 90, and his family made the first donation of the evening by announcing a $7,000 gift from his estate.

While Auction of Washington Wines weekend ended, fundraising continues. One auction lot remains available, a buy-in for 30 couples to Walla Walla, which includes exclusive wine country experiences and dinners in the vineyards and wineries. People can purchase one or more at $2,500 per couple. There also will be a small online auction for the holiday season.