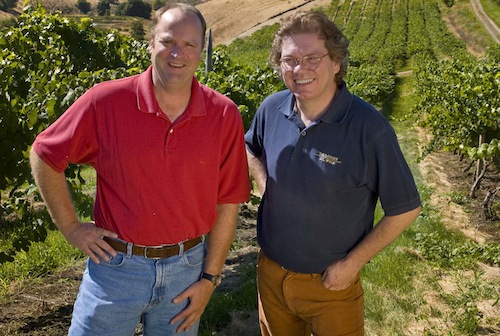 Riesling was Washington’s original important grape, playing a big role in the establishment of the Columbia Valley as a viable wine-producing region back in the 1960s and 1970s.

In 1974, a blind tasting of international Rieslings conducted by the Los Angeles Times deemed a 1972 Ste. Michelle Johannisberg Riesling the top wine. This was a seminal moment not only for the winery but also the Washington wine industry.

As Chardonnay and Merlot gained popularity in the 1980s and 1990s, interest in Washington Riesling began to wither. In fact, Riesling’s popularity worldwide waned during that time, even to the point that Müller-Thurgau became the most-planted grape variety in Germany – Rieslings ancestral home.

However, a turning point in the American wine industry occurred in 1999, when Chateau Ste. Michelle and Ernst Loosen of Germany’s Mosel Valley got together to create Eroica, a high-end bottling of Riesling that captured attention for the variety. That year, just 9,800 tons of Riesling were harvested in Washington. By last year, that had grown to an astonishing 40,200 tons – a fourfold increase in tonnage in just 15 years.

Today, Chateau Ste. Michelle makes more Riesling – more than 1.2 million cases – than any other winery in the world (including Germany) and has brought together two of the world’s finest Riesling winemakers: Loosen from Germany and Wendy Stuckey from Australia, who joined Ste. Michelle in 2007 as its white winemaker.

But Washington is not the only state having a great time making one of the most noble of grapes. Oregon also has embraced Riesling by producing mostly small lots of high-quality wines. Because the cooler Willamette Valley cannot support the same high tonnage of grapes as the arid Columbia Valley, Oregon’s Rieslings tend to be higher in price, and the best examples are dry.

Riesling is the No. 1 wine grape in Idaho, where the Snake River Valley’s high elevation almost always guarantees terrific acidity. Ste. Chapelle, owned by Seattle’s Precept Wine, is by far the largest producer of Riesling in Idaho.

And many of the New World’s greatest examples of Riesling are coming from British Columbia, where such producers as Gehringer Brothers, Wild Goose and JoieFarm are crafting stunning wines.

Here are a dozen examples of Riesling from Washington, Oregon and Idaho that we’ve tasted in recent weeks.