WALLA WALLA, Wash. — Business is booming for the Wisconsin boys at Dusted Valley Vintners, so the Walla Walla Valley winery added to its team by hiring winemaker Griffin Frey in time for the 2014 harvest.

“It is our plan to continue to craft the Boomtown wines up at Wahluke Wine Co.,” Johnson told Great Northwest Wine. “In his new role, he will take over the responsibility and oversee the production of the Boomtown wines moving forward.”

Braunel and Johnson didn’t go far to recruit Frey, who has been making wine for Corliss Estates/Tranche Cellars in Walla Walla.

“I am honored and excited about joining the Dusted Valley family,” Griffin said in a news release. “The opportunity to make wines from the best vineyards in the state while being surrounded by a great team is a testament to what the Dusted Valley crew has already accomplished. I look forward to contributing to the wine quality and growth of an already stellar brand.” 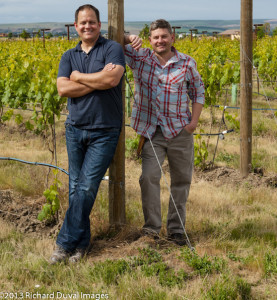 Dusted Valley Vintners, established in 2003, was named Wine Press Northwest magazine’s Washington Winery of the Year in 2010. It came on the heels of its award-winning 2006 Reserve Cabernet Sauvignon, which featured Wisconsin oak and marked its first vintage with estate fruit.

Its hedonistic work with Rhône varieties ranks alongside the best in the state, and in 2013 it was named Wine & Spirits magazine’s Winery of the Year.

Dusted Valley’s estate vineyards include Sconni (a play on the owners’ Wisconsin roots) and Stoney Vine, a fascinating site firmly rooted in the Oregon side of the Walla Walla Valley and part of the proposed The Rocks District of Milton-Freewater American Viticultural Area, which could be approved as soon as next month. Its plantings have helped Dusted Valley grow its annual production to 5,000 cases, and Boomtown is now an expanding 20,000-case lineup of Cabernet Sauvignon, Merlot, Syrah, Chardonnay and Pinot Gris priced below $20 a bottle.

Braunel and Johnson said they will remain involved in the winemaking, but the addition of Frey allows them to spend more time on their vineyard projects and grower relations as well as sales and marketing of their tasting rooms in Walla Walla and Woodinville.

“We have been looking for just the right individual to join our team, and Griffin was the natural choice,” Braunel said. “We’ve admired the wines he has crafted for years, and he and his family are a welcome part of the Dusted Valley family. This is an integral piece that is really going to help propel our brands forward in the coming years, and we couldn’t be more excited.”

Griffin, who grew up in California, graduated from the University of Washington in 2001 after studying history. He then moved to Sonoma County when he worked at Ramey Wine Cellars in Healdsburg. He climbed up the winemaking ranks before returning Washington in 2010 and working in Walla Walla for Michael Corliss.

“We are really excited about this evolution in winemaking for Dusted Valley,” Johnson said. “I’m confident that Griffin’s experience with many of the same world-class Washington vineyards we work with, his skill set and attention to detail will translate into great things for Dusted Valley and build upon the solid foundation that we’ve put into place.”