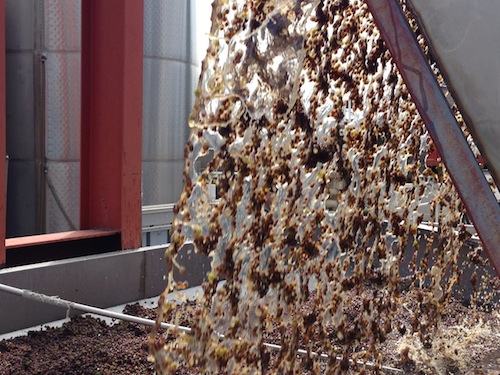 A wall of Pinot Gris grapes and juice drop from a bin into crush equipment Sunday at Barnard Griffin in Richland, Wash. The Washington wine grape harvest is now getting into full swing. (Photo by Andy Perdue/Great Northwest Wine)

RICHLAND, Wash. – Washington’s wine grape harvest is getting off to another fast start.

On Sunday morning, Barnard Griffin brought in 24.5 tons of Pinot Gris from its estate Caroway Vineyard east of Kennewick. Owner/winemaker Rob Griffin said the purple and yellow grapes measured 19.5 brix in sugar, perfect for what he’s seeking at this point in harvest. He will pick the rest of his Pinot Gris in a couple of weeks and ultimately blend the two batches together.

It is an early start for Washington. Last year, Barnard Griffin brought in its first grapes on Aug. 27. This year’s start is the earliest in Griffin’s 37 harvests in Washington wine country, dating to his arrival in 1977 to take over winemaking at Preston Wine Cellars in nearby Pasco.

On Sunday morning, the entire family was on hand for the first grapes arriving. Deb Barnard, Griffin’s wife and co-owner, grabbed a shovel and helped their daughters Elise Jackson and Megan Hughes move grapes through the destemmer and into a waiting press.

Barnard Griffin is not the first winery in the state to bring in grapes this year. That distinction goes to Champoux Vineyards, which harvested a rare hybrid grape called Marquette on Aug. 18. And in North Central Washington, Craig Mitrakul of Crayelle Cellars in Cashmere reported bringing in some early Chardonnay on Saturday to make sparkling wine. 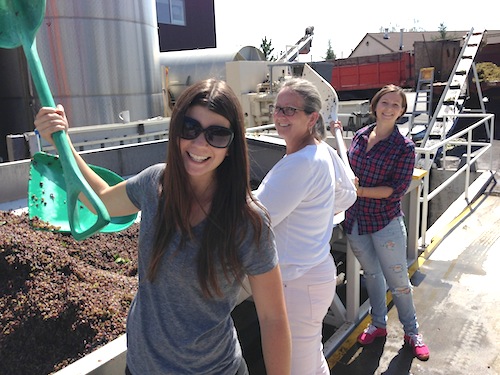 Griffin will bring in another 40 tons of Sauvignon Blanc on Tuesday from Sagemoor Vineyards north of Pasco, traditionally one of the warmest areas in Washington wine country.

“We’re one of the first in on Sauvignon Blanc and one of the last in on Cabernet Sauvignon,” Griffin told Great Northwest Wine.

This morning, Holly Turner of Three Rivers Winery in Walla Walla is bringing in about 30 tons of Chardonnay from Sagemoor.

It’s the beginning of a busy week for Sagemoor, said Kent Waliser, who oversees the farm and its four vineyards. His crew was on harvesters by midnight picking the Chardonnay for Turner. He will follow up with Griffin’s Sauvignon Blanc, then more than 40 tons of Sauvignon Blanc and 100 tons of Chardonnay for Hedges Family Estate on Red Mountain.

After three days of heavy early picking, Waliser said he’ll probably get a little break until the next big push.

Ste. Michelle Wine Estates, which uses two out of every three grapes grown in Washington, will begin bringing in Sauvignon Blanc and Chardonnay this week, too, said Kevin Corliss, vice president of vineyards for Ste. Michelle.

Washington’s growth is coming from new blocks of vines coming into production this year, particularly red varieties in the warm Horse Heaven Hills south of the Yakima Valley.

It’s also expected to be among the warmest on record. As of Aug. 17, the 2014 growing season was ahead of the hot 2013 vintage and well ahead of the long-term average.