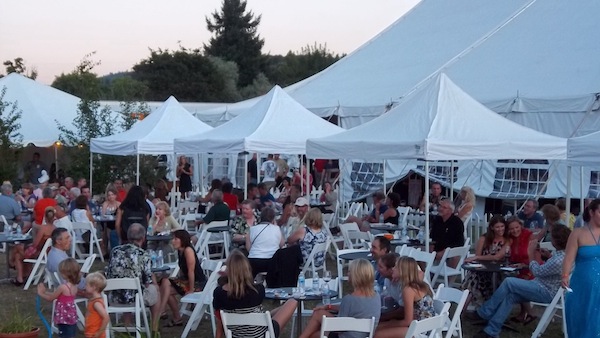 The Southern Oregon World of Wine grand tasting was held at Bigham Knoll in Jacksonville. (Photo courtesy of WOW)

JACKSONVILLE, Ore. — An Albariño by Umpqua Valley icon Abacela and a Malbec made by Agate Ridge Vineyard in Eagle Point were the clear winners at this year’s Southern Oregon World of Wine competition, a judging panel that featured two Masters of Wine.

The field of 207 wines from 49 wineries was evaluated be Dilek Caner, MW, founder of Tasting World in Dallas, Texas; Amy Christine, MW, of Kermit Lynch Wine Merchant and proprietor of Black Sheep Finds in Lompoc, Calif.; and Mike Dunne, Sacramento Bee wine columnist. The competition has recruited 12 Masters of Wine to serve on its single, three-person panel during the past five years.

Abacela, which set the benchmark in the Pacific Northwest for the Spanish red variety Tempranillo, continues to do the same for Albarino — an Iberian white grape championed by founding winemaker Earl Jones — and his 2013 vintage named best white wine of the competition and was awarded one of the two double gold medals in the judging. The Roseburg winery was named 2013 Oregon Winery of the Year by Wine Press Northwest in large part for its work with grapes from Spain and Portugal, and winemaker Andrew Wenzl also received best of show/other wine in Jacksonville for its 2013 Grenache Rosé.

Agate Ridge’s 2011 Malbec was the only other unanimous selection for gold in the competition, and winemaker Brian Danner’s bottling was awarded the best red wine of the judging.

Just 11 gold medals were awarded during the judging — a rate of 5 percent — and four of those were given to Bryan Wilson, who makes wine for Cuckoo’s Nest Cellars, Foris Vineyards and Pebblestone Cellars.

The awards and top wines were featured at dinner held at Bigham Knoll in Jacksonville. The multi-day World of Wines festival included sensory classes and was capped by a public tasting on Saturday, Aug. 23. Proceeds of the World of Wine are earmarked for Asante Foundation, which supports health care initiatives in Southern Oregon, including the Children’s Miracle Network.