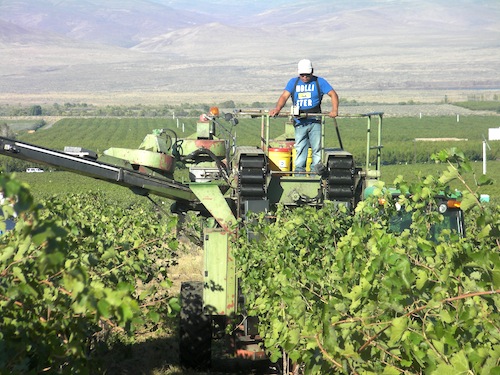 A crew works a mechanical harvester at a vineyard on the western edge of the Wahluke Slope during harvest 2013. (Photo by Andy Perdue/Great Northwest Wine)

While a few hundred tons were picked last week and even this weekend, today is the official start of the 2014 Washington wine grape harvest.

Usually, winemakers prefer to start harvest after Labor Day – partly to let the grapes develop flavors and partly to get that last three-day weekend in before the 60-day sprint to Halloween, when the vast majority of the grapes will be harvested and crushed.

As harvest officially gets under way, we take a look back at a few photos we took during the 2013 harvest.