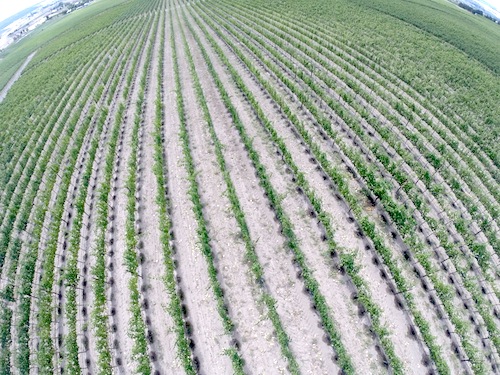 Vineyards on Washington’s Red Mountain are ripening quickly this year, thanks to one of the warmest vintages on record. This photo is of Col Solare’s estate vineyard, just below the winery. (Photo by Great Northwest Wine)

ASHLAND, Ore. — Greg Jones, the world-renowned climatologist from Southern Oregon University in Ashland, issued his short-term forecast for the Pacific Northwest wine industry on Tuesday and described it as “decent to wonderful.”

“As we move into September and the harvest period, changes in our weather become more rapid and harder to predict,” Jones wrote to subscribers of his newsletter. “However, the models are showing that the changes in circulation and the start of more southerly movement of storms across the western U.S. will likely be slow to come. The current short-term forecasts are pointing to decent to wonderful conditions over the West. While the models are showing some wiggles in the jet stream, cloud cover and rainfall is currently forecast to be limited to northwest Oregon and Puget Sound northward.”

Pacific Northwest grape growers and winemakers enter the home stretch and harvest of the 2014 vintage as large portions of the West Coast continue to experience warmer-than-average temperatures. On Tuesday, the National Weather Service reported that Seattle  experienced its warmest-ever July and August.

Jones, professor of environmental studies, showed the western valleys of Oregon and Washington’s Columbia Valley were about 3 to 8 degrees above normal, while the rest of the United States has been mostly cooler and wetter than normal.

“The warm and dry conditions forecast earlier, here and by others, for the summer over the western U.S. have materialized,” Jones wrote. “However, it is interesting to note that preliminary data from many stations suggests that the warmer conditions are coming from higher minimum temperatures, not maximum temperatures.

“Other data and indicators reveal that this is likely being driven by higher humidity (not much, but enough to matter), mostly from warmer North Pacific sea surface temperatures, but also more moist monsoon airflow, which together have muted daytime temperatures and caused the nights to be warmer,” he added.

Among the weather stations in Pacific Northwest vineyards used by Jones are those are in McMinnville (Willamette Valley), Milton-Freewater (Walla Walla Valley), Roseburg (Umpqua Valley) and Medford (Rogue Valley). 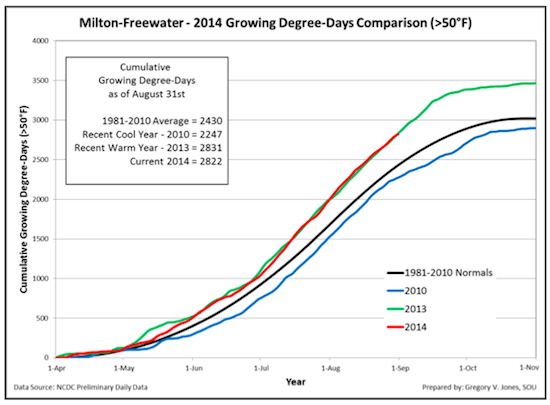 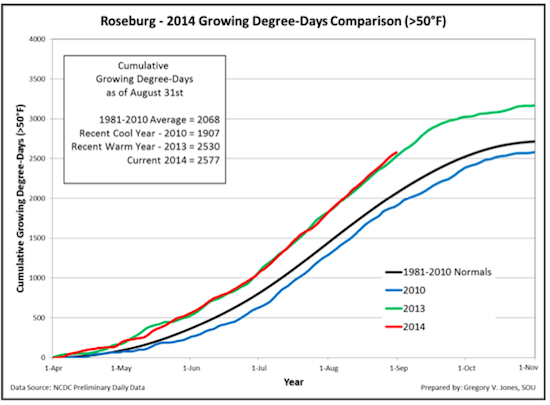 “The continued warmer-than-normal temperatures brought the 2014 growing degree-day accumulations to near-record numbers for all four locations,” said Jones, recently named as director of SOU’s Division of Business, Communication and the Environment. “Degree-days are similar or slightly above the 2013 values on this date (the same in Milton-Freewater, but 8 percent up in McMinnville). All four locations are running above their 2004-2013 average (11 to 23 percent) and their 1981-2010 average (16 to 27 percent) for the first five months of the growing season.”

Jones said the Climate Prediction Center forecast for the next 90 days – September through November – indicates that the Pacific Northwest will see continued warmer-than-normal condition.

At this point, there’s no major weather event headed across the Pacific this fall. Then again, last September’s aftermath of Typhoon Pabuk hosed down Northwest vineyards in record fashion, and winemakers had only a few days to prepare and adjust their harvests.

“In summary, all evidence continues to point to a continued warmer-than-average September and end of growing season across the West with drier-than-normal conditions expected in Washington and Oregon – with some possible rain in southern California,” Jones wrote. “HOWEVER, at this time last year we were sitting in about the same place, when the remnants of a typhoon and a dip in the jet stream changed everything. Even a 7-day forecast completely missed it.”