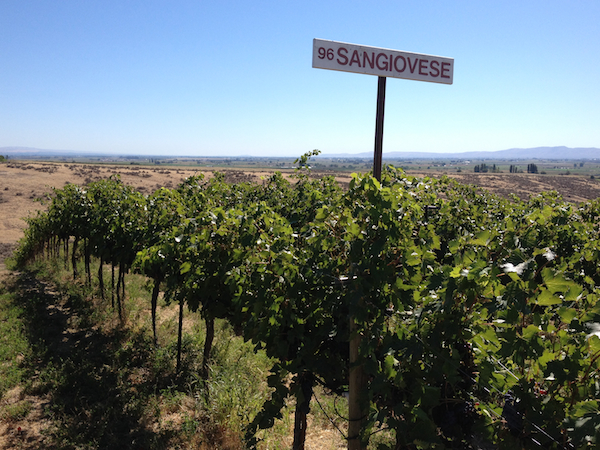 Sangiovese planted in 1996 ripens at Red Willow Vineyard in the western edge of the Yakima Valley. (Photo by Eric Degerman/Great Northwest Wine)

ASHLAND, Ore. — Southern Oregon University climatologist Greg Jones predicts the Pacific Northwest wine industry will continue to see generally dry and slightly warmer-than-normal conditions for the remainder of what is shaping up to be a record-setting 2014 vintage in some areas.

“As the first half of September comes to a close, we are likely to be saying goodbye to the extreme heat,” Jones wrote Saturday in his latest forecast report, which he shares with winemakers and grape growers. “Conditions over the past two weeks brought near-record temperatures in some locations, especially in the inner valleys of California and Oregon.

“Many of these areas remain on track for record heat accumulation numbers for 2014,” he added. “However, locations with coastal influences saw marine layers strengthen and temperatures at or near normal over the last couple of weeks. Eastern Washington also saw temperatures closer to normal due to cooler nights.”

Weather data collected by Washington State University and posted on its AgWeatherNet site indicates several area are ahead of the hot 2013 vintage. The Desert Aire station reported 3,372 growing degree days through Sept. 13. Last year by this date, the 50-degree base temperature GDD figure was 3,371, while the six-year average was 2,932.

Last year’s building of growing degree days were slowed by the significant remnants of Typhoon Pabuk, which drenched and cooled many Pacific Northwest vineyards.

The Pullman school also lists several stations in Oregon’s Willamette Valley wine growing region, including Corvallis East, which showed 2,187 GDD on Saturday, significantly ahead of last year’s figure of 2,100 and well ahead of the average of 1,723.

“Forecasts are showing some changes, namely short-term cooling to more seasonal temperatures from now through Sept 15-16 with slightly warmer days but cooler nights (shorter days and less heating),” Jones wrote. “The first real fall type of system arrives on Sept. 17 and should bring a marine push to coastal areas (winds and cooler conditions) and widespread light precipitation from Sept. 17-19 from Northern California into the Puget Sound. The models do not agree on the amount and location of rain at this time, but from my vantage point it would appear to be dry south into California, spotty over western Oregon and Washington, then only a slight chance in eastern Washington.”

Starting on Saturday, look for a return to dry and traditional temperatures, Jones predicted.

“Once the first system clears out to the east, models show a building ridge with drying conditions during Sept 20-24,” Jones wrote. “Differences with this ridge and those in the recent past are more seasonal daytime temperatures and cooler nights. Models diverge after Sept 24, with some showing a decent chance for rain during Sept. 25-27, but again the amounts and location are not clear at this time.”

Jones said the Climate Prediction Center called for Tropical System Odile to leave rain in Southern California this week. Longer term forecasts from the CPC include:

9-10 day: Temperatures likely at or slightly above normal across California, Oregon and Washington. Precipitation probabilities up for northern Oregon northward and down for southern Oregon south into California.

30 day: Holding for temperatures to be at or above normal across California, Oregon and Washington. Precipitation odds are tilting to drier than normal over most of the West, except areas of Southern California, the desert Southwest and into the Great Basin, where monsoon flow will likely still bring more than normal rainfall to the region.

90 day: Temperatures continuing to be at or slightly above normal. Precipitation likely lower than seasonal conditions over most of the West, but wetter from the desert Southwest into the Rockies.