SEATTLE – It hasn’t taken long for a guy from the East Coast who was merely interested in learning more about wine to become one of the most important reviewers of Washington wines in the world.

We recently caught up with Sullivan via Skype. Here’s our interview:

Coming to the Pacific Northwest

Sullivan grew up near Boston and came to the Pacific Northwest 15 years ago to visit his brother, who was graduating from Evergreen State College in Olympia.

“I fell in love with the state,” he said, and he quickly began working on ways to move to Washington on a permanent basis. When he did arrive, he was working for a biotech company as a trainer and product developer.

Sullivan was beginning to explore wine at the time, particularly Bordeaux, so he decided to use his burgeoning interest in wine as a way to explore Washington. At the time, Washington had about 200 wineries.

“My original intention was to taste all the wineries in the state and move on to something else.” 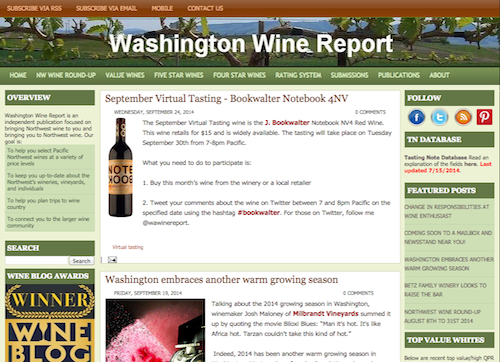 On a trip to Washington wine country with a friend in 2005, Sullivan took copious notes – his usual method for remembering where he visited and the wines he tasted. Later, his friend asked him for his notes, so Sullivan dutifully wrote them up and emailed them. This friend emailed them to another friend – and so on – until Sullivan had gained a small fan base. He began to email the private group his tasting notes and writings from new wine adventures, and that eventually turned into a PDF newsletter.

When Sullivan began writing Washington Wine Report, he developed a five-point system for reviewing the wines he tasted. He later began using the popular 100-point scale for his tastings, though he didn’t formally publish them until he began writing for Wine Enthusiast.

About 20 months ago, Sullivan began writing for Wine Enthusiast, a monthly wine publication. He shared duties with Gregutt, the magazine’s longtime Northwest correspondent who was transitioning to a partnership with Precept Wines on a brand called Waitsburg Cellars.

Starting in October, Sullivan will cover all of Washington, plus the parts of the Columbia and Walla Walla valleys that dip into Oregon – which means primarily the southern Walla Walla Valley around the town of Milton-Freewater, Ore. Gregutt will focus exclusively on Oregon wines.

As part of this assignment, Sullivan will write reviews and feature stories for both the printed and online versions of the magazine.

Unlike reviewers for Wine Spectator magazine and Wine Advocate newsletter, Wine Enthusiast has long used reviewers who live in the Pacific Northwest. While he has deep respect for the reviewers from other publications, Sullivan sees this as a distinct advantage.

“I’m in a position to be immersed in the region,” he said. “I think it’s an advantage to be here. It gives me more opportunities to interact with the growers and winemakers.”

In the latest issue of Seattle Met, Sullivan reveals his top 100 wines of 2014, led by Cayuse Vineyards’ God Only Knows, a Grenache from the Milton-Freewater winery. This is the fifth year Sullivan has written the feature for Seattle Met, and this year he evaluated 710 wines to determine his favorites.

“It’s a challenging task,” he said.

In addition to his wine writing, Sullivan also keeps busy reaching new heights around the Pacific Northwest as a mountain climber and instructor.

On his first visit to the state, Sullivan became mesmerized by Mount Rainier and decided he must climb it. He summited the Northwest’s tallest peak with renowned outfitter Rainier Mountaineering, Inc.

“It was by far the hardest thing I’d ever done,” he said.

He was hooked, and he joined The Mountaineers, an outdoors group with more than 100 years of history, and began taking its courses. For the past decade, Sullivan has served as an instructor and spends a lot of time climbing rocks, glaciers and mountains.

“It’s my primary passion in the summertime,” he said.

Now Sullivan is scaling to the top of the Washington wine writing scene, thanks to his diligence, focus and hard work. And he could not be happier.

“It’s a very fun time to be writing about the state,” he said. “I’m really honored to be doing it for Wine Enthusiast.”