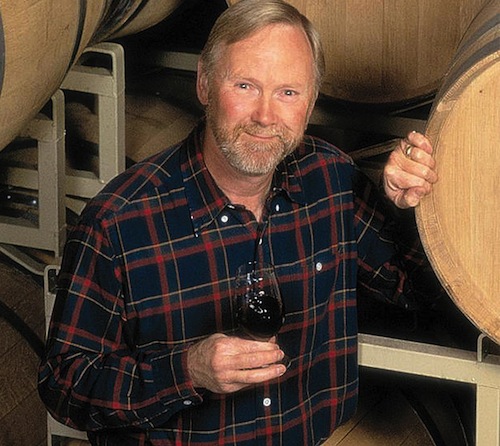 David Lake was a Master of Wine who was head winemaker for Columbia Winery from 1979 to 2005. He died five years ago. (Photo courtesy of Columbia Winery)

Five years ago, Washington wine country lost a legend, a giant upon whose shoulders the rest of the state industry was built. 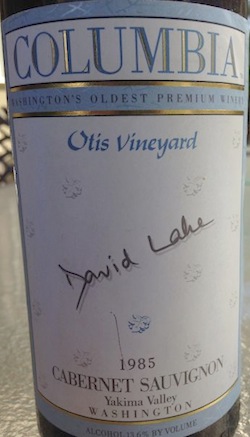 An Otis Vineyard Cabernet Sauvignon made in 1985 by David Lake of Columbia Winery. (Photo by Andy Perdue/Great Northwest Wine)

A half-decade later, Lake still is fondly remembered as one of the modern Washington wine industry’s true pioneers.

“David never ceased to be interested and engaging,” said Mike Sauer, owner of Red Willow Vineyard in the Yakima Valley. “He had endless enthusiasm for learning and experimenting.”

Sauer perhaps knew Lake best, as the two collaborated nearly from the moment Lake arrived in the state in 1979 until the winemaker retired a quarter-century later. The two met at a grape growers meeting, and Sauer caught a ride with Lake back to his vineyard in the western Yakima Valley.

Lake, born in London, England, to Canadian citizens, worked in the British wine trade and earned the difficult and coveted Master of Wine degree before making his way the New World. He spent time at The Eyrie Vineyard in Oregon’s Dundee Hills prior to being lured north to Associated Vintners, a winery that began in 1962 and was the state’s first producer to focus on wines made with European wine grapes. It was a great fit for Lake.

Not long after Lake’s arrival, the winery changed its name to Columbia Winery. That wasn’t the only thing that changed. Lake was sure of that.

Back in the early 1980s, the Washington wine industry consisted of Chateau Ste. Michelle, Columbia Winery and a few small producers. It was far from sophisticated, but Lake set out to make a difference.

In 1981, Lake began crafting vineyard-designated wines. This is common practice now, but Ridge Winery in California – and few others – were doing it back then. Lake made bold statements about his wines by putting names such as Red Willow, Sagemoor and Otis vineyards on his labels. 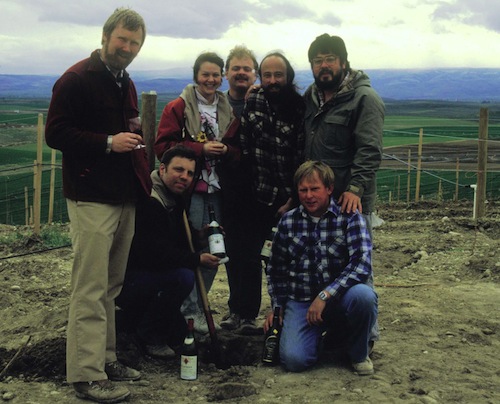 In 1984, Lake and Sauer began talking about Syrah, a red grape variety that was just beginning to be planted in California. In 1985, Lake helped secure cuttings from one of the few vineyards in California that was growing Syrah at the time, and Sauer put them in his vineyard nursery for a year before planting them in 1986. When those vines were planted, Lake brought some Côte-Rôtie or Hermitage wines (Syrah from the Northern Rhône) for Sauer and his crew to enjoy. Then, they dug holes amid the vines and buried the bottles.

“David recognized at that time that it was part of history being made,” Sauer said. “I didn’t – I was planting more grapes.”

He added that Lake wanted to bury the bottles “so the vines would know what they should be thinking about,” Sauer said.

From those vines, Lake crafted Washington’s first Syrah from the 1988 vintage, and Red Willow Vineyard Syrah became one of his signature wines for the rest of his career.

Later, Sauer and Lake traveled to France so they could visit the great wine regions.

“He wanted me to understand the Northern Rhône region,” Sauer said.

“I still think David was the most involved winemaker I’ve worked with in the vineyard,” he said. “He kept track of what was going on. He had the pulse of what was happening throughout the whole season. Winemakers want to be involved in the last two weeks (before harvest), but David understood the whole progression.”

Lake also had a knack for making his growers feel involved in the entire winemaking process.

Kent Waliser, general manager for Sagemoor Farms north of Pasco, worked with Lake for a few years before he retired from Columbia.

“He was always very calm and matter of fact,” Waliser said. “I worked with him for about five years. He knew exactly what he wanted. He had his style and didn’t waver based on trends. He just stayed the course and followed that same style. He was a gentleman and had a nice, steady nature about him. You could always depend on him being around. He must have put a lot of miles on his car over the years. He walked the vineyard and made his picking decisions on his own.” 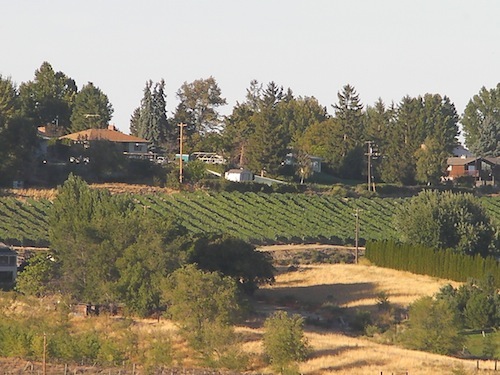 Harrison Hill, a vineyard in the Snipes Mountain AVA near the Yakima Valley town of Sunnyside, was once part of David Lake’s repertoire. He later suggested that Chris Upchurch secure the grapes for DeLille Cellars. (Photo by Andy Perdue/Great Northwest Wine)

Lake’s influence extended beyond Columbia Winery and the vineyards he worked with. He helped DeLille Cellars get started in the early 1990s as a consulting winemaker, working with Chris Upchurch. Upchurch, now considered one of Washington’s great winemakers, recalls how Lake was able to help the upstart Woodinville winery get into some great vineyards just because of his involvement in DeLille.

Lake also helped DeLille secure grapes from Harrison Hill, a small vineyard near Sunnyside that Lake had worked with in his early days. The vineyard had been owned by Associated Vintners and was planted by its original partners in 1962.

By the time DeLille started, all the grapes for Harrison Hill were going to Chateau Ste. Michelle. On a trip through the Yakima Valley, Lake slyly mentioned to Upchurch that he should see about getting those grapes, saying Upchurch could do great things with them.

So Upchurch and his partners at DeLille approached Allen Shoup, then CEO of Ste. Michelle, who was more than happy to release the vineyard to DeLille. The first DeLille wine from Harrison Hill was a 1994 Cabernet Sauvignon, and by 1996, it became a Bordeaux-style blend that is one of the classic reds in Washington.

“In 1999, I made one of the great wines of my career,” Upchurch said. “It’s beautifully expressive with purity of fruit. It taught me my place. It’s humbling.”

All because of a nudge from David Lake.

In 2000, Lake’s health became an issue. That year, he had open-heart surgery and was out of commission for most of the rest of the vintage. After the 2005 vintage, Lake retired. He struggled with heart troubles and diabetes until his death, Sauer said.

In 2001, Columbia Winery was sold by Corus Vineyards & Estates to Constellation Brands, and that changed the winery and the business.

During Lake’s time at Columbia, nearly all of the grapes from Red Willow Vineyard went to him. But when Constellation took over, Sauer said there was a push for grapes that were riper in style and less expensive, a combination that’s simply too difficult to achieve at Red Willow.

With Lake retired, Sauer turned to smaller wineries looking for high-end fruit to sell his grapes. Today, Sauer works with more than a dozen small producers, including such wineries as Betz, Owen Roe, Efeste, DeLille, Gramercy and Westport.

Bob Betz, winemaker for Betz Family Winery, crafts a Syrah from those original vines and calls it La Côte Patriarche, an homage not only to the vineyard but also to honor Lake.

In 2010, a year after his death, Lake was named to the Legends of Washington Wine Hall of Fame.

In 2008, Constellation sold Columbia Winery to Ascentia Wine Estates, which then sold it to E&J Gallo in 2012. Today, Sean Hails is Columbia’s winemaker. Although he never met Lake, Hails realizes his importance not only to Columbia but also the entire industry.

“His photo is on the wall in the tasting room,” Hails said. “It makes me really proud to be here. I hope to build on what he started. It’s intimidating, but I try to put that out of my head. It’s an opportunity to follow him.”

Which is something the entire Washington wine industry has done.