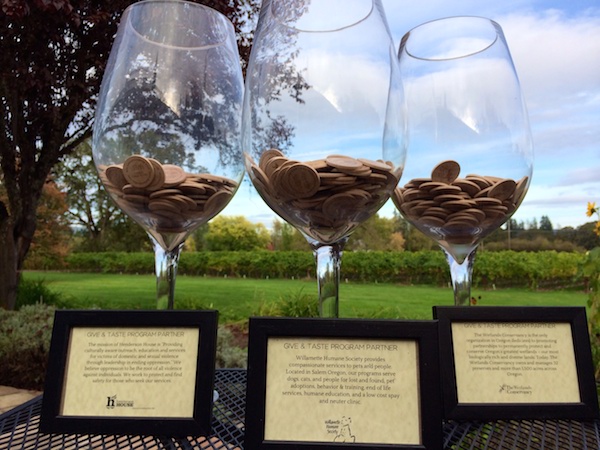 Fries Family Wines recently launched its Give and Taste Program, which uses the tasting fee for specific small-lot wines to raises funds for non-profits. (Photo courtesy of Duck Pond Cellars)

DUNDEE, Ore. — Wineries deal with scores of requests each week from non-profit groups seeking donations of wine while visitors complain about tasting fees.

Fries Family Wines, the umbrella for Duck Pond Cellars in Oregon and Desert Wind Winery in Washington state, recently launched a delicate and organized way to handle both issues with the Give and Taste Program. And the focus is on exclusive, reserve-style wines.

“All wineries are inundated with donation requests. There’s something about being a winery and having wine,” marketing director Amber Fries said with a chuckle. “They want wine and services from you, which is great, but we wanted a way to focus our attention on a few organizations without having to say ‘No’ to everyone.”

Fries estimated her family’s winery donations at six figures since opening in 1993, but it’s been an especially busy year of supporting special causes for one of Oregon’s largest family-owned wineries. Last spring, Duck Pond released its Duck Pond 2012 Conservation Cuvée Pinot Noir, a $24 wine that includes a $5 donation to the Oregon Department of Fish and Wildlife’s Conservation Program.

“Give and Taste is not replacing that program at all,” she said. “In fact, we’re releasing our second Conservation Cuvée next month.”

Give and Taste begins with five non-profits

Fries Family Wines provides a program in its tasting rooms describing the Give and Taste Program and its feature wine. (Photo courtesy of Duck Pond Cellars)

It launched Give and Taste last summer with five organizations the Fries family already enjoyed relationships with.

Fries said the program is simple. Each month, a limited-production wine is made available on the tasting list at each winery for fee of $2 per taste. The entire fee is donated to one of the Give & Taste partners, and the taster receives a token and drops it into the receptacle for the organization of their choice.

“We have information about our partners displayed in each tasting room, and our tasting room staff is briefed on the mission statements for each non-profit,” Fries said. “We are willing to have a conversation with the guest so they make an informed decision. We really like that aspect.”

At the family’s Duck Pond tasting room in Dundee, Ore., a recent Give & Taste selection was the 2012 Estate Syrah from Washington’s Wahluke Slope. Each guest tasting that wine directed their fee to go to either the Henderson House to assist victims of domestic and sexual violence, the Wetlands Conservancy or the Willamette Valley Humane Society.

At the Desert Wind Winery tasting room in Prosser, Wash., alternatives were Northwest Harvest and The Children’s Reading Foundation of the Mid-Columbia.

“We want these relationships to be more of a partnership rather than just handing over give a case of wine for an auction, and then you don’t know what happens after that,” she said.

Fries Family Wines recently launched its Give and Taste Program, which uses the tasting fee for specific small-lot wines to raises funds for non-profits. (Photo courtesy of Duck Pond Cellars)

By the end of the summer, the two tasting rooms combined to raise $1,500 via Give & Taste.

“We started it three months ago, and we just cut our first check of from it,” Fries said. “We wanted to work the kinks out with organizations that we’d partnered with before as we prepared for the beginning of the application process.”

Last year, the Fries family celebrated its 20th anniversary in the Northwest wine industry, which began with Duck Pond Cellars in Dundee, Ore. It has grown to produce about 45,000 cases annually under the Duck Pond label and makes about 10,000 cases in Washington state through Desert Wind. It also produces about 60,000 cases of bulk wine, and its 1,017 acres of vineyards off eight sites in two states allows it to contract more than 1,200 tons of grapes to other wineries.

Duck Pond is one of the few Dundee Hills wineries that still offers some complimentary tastings, which are of its widely distributed and consumer-priced Chardonnay, Pinot Noir and Pinot Gris. It does, however, charge for its small-lot tasting flight, but the $5 charge is refunded with the purchase of those wines.

That Chardonnay became one of the featured wines sold at the Oregon Zoo concert series, and Duck Pond also was a part of the lineup in the First Base Vine wine bar at Safeco Field in Seattle.

“Those are pretty big concerts at the zoo, and it’s a huge audience for us at Safeco Field, so we’re picking up a few different account like those,” Fries said.

Last week, the family began accepting applications from organizations for its 2015 Give and Taste Program. The deadline to enter is Nov. 1.

“It’s been pretty insane,” Fries said. “We have about a dozen groups that have already applied, so we’re pretty excited about it. We didn’t have a formal application process before, and this is a nice way for us to partner with a non-profit and expose them to a new audience of wine drinkers.

“It’s also a way for us to associate our brand with some new people, their organization and hopefully be a part of some of their special events as a wine sponsor,” Fries continued. “We’re planning some other cool stuff and trying to come up with lots of different options.”