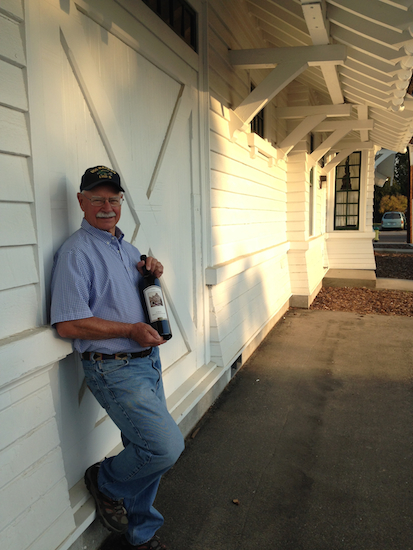 Dr. Hugh Shiels, who has been an orthopedic surgeon in Sunnyside, Wash., since 1976, is closing his practice next month and turning a former Union Pacific train station into a tasting room for his family’s Côte Bonneville winery. (Photo by Kerry Shiels/Courtesy of Côte Bonneville)

SUNNYSIDE, Wash. — In 1982, orthopedic surgeon Hugh Shiels hauled a historic railroad depot across Washington’s Yakima Valley from Grandview to downtown Sunnyside and turned it into his doctor’s office.

On Dec. 20, the day after he shutters his practice, Shiels and his family will begin to transform his office and waiting room into a tasting room for their acclaimed Côte Bonneville winery. If all goes well, they will be pouring some of their cult wines in the former Union Pacific depot by Valentine’s Day — and in time for the Yakima Valley’s annual Red Wine and Chocolate celebration.

“A lot of doctors when they retire, they don’t have something to segue into,” Shiels told Great Northwest Wine. “To me, this isn’t a retirement, but more of refocusing professionally.”

The family has hired Geoff Prentiss of Seattle-based Prentiss Architects to design a multi-phase project that ultimately will include a “really comfortable” wine bar, catering kitchen and conference room for private tastings and dinners.

“The enthusiasm for this in the community has been really strong,” Shiels said. “Even those who don’t drink alcohol are excited because they want a comfortable place to gather downtown. There’s not really a place in Sunnyside where you can come in the evening to have a glass of wine.” 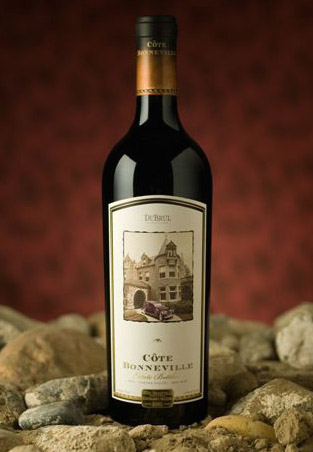 Côte Bonneville from DuBrul Vineyard in the Yakima Valley is one of Washington state’s most collectible wines. (Photo courtesy of Côte Bonneville)

Phase one is the tasting room, and sales for the 2,500-case Côte Bonneville should improve almost immediately, he said.

“When we have people come to the winery, some of them are almost embarrassed to ask if they can buy wine here,” Shiels said. “We’ve had to hold our tastings in the production facility, and sometimes people will tell us, ‘We want to buy wine, but don’t want to bother you at home.’ ”

Shiels, with help from his wife, Kathy, and some of the industry’s leaders, planted DuBrul Vineyard — one of the state’s most renowned sites — and subsequently created some the Pacific Northwest’s most coveted wines with the help of Wade Wolfe, Co Dinn, Kay Simon and Clay Mackey of Chinook, and the late Stan Clarke.

Their rocky, 45-acre DuBrul Vineyard, a former Red Delicious apple orchard, was first planted in 1992 and named as a tribute to his mother. It’s home to six varieties — Cabernet Sauvignon, Cabernet Franc, Merlot, Chardonnay, Syrah and Riesling — and customers include the likes of Betz, DeLille, Owen Roe and Woodward Canyon.

“We sell 75 percent of our fruit, and I update vineyard customer list every year,” Shiels said. “It’s a bit like a baseball team in that you have to change up the roster a little every year.”

David O’Reilly of Owen Roe continues to get a regular turn, however.

“Owen Roe came on board in 1999 and has been our steadiest customer over the years,” Shiels said.

Côte Bonneville, named for a mansion near his hometown of Cincinnati, Ohio, that his great, great-grandfather designed, is a brand dedicated to estate fruit. Since 2009, the wines have been made by daughter Kerry, who produces their Côte Bonneville and Carriage House red blends, a Chardonnay, Syrah, Riesling and rosé. Their first wines, starting with the 2001 vintage, where made first by Clarke and then Dinn.

Next year, Kerry will unveil a lower-priced Cabernet Sauvignon named in honor of their new tasting room.

“We’ve been working long range on this,” he said.

The move away from medicine means Dr. Shiels will get to spend more time with family. Kathy will gladly trade the hours of clerical work at the doctor’s office to work at the new tasting room.

“It’s been progressively more cumbersome for Kathy, and I see this as a tremendously liberating experience for her because she’ll no longer have to deal with health insurance companies,” Dr. Shiels said. “She’ll be able to focus her energies on the growth of the winery. She does a fabulous job with people and planning, and she’s always been a great help in the cellar, too.”

Dec. 19 will be melancholy for their patients, who have been referred to surgeons in Yakima and the Tri-Cities. And since he’ll no longer practice medicine, Dr. Shiels hopes to get on the saddle for a few more miles with his cycling friends, which include Dinn.