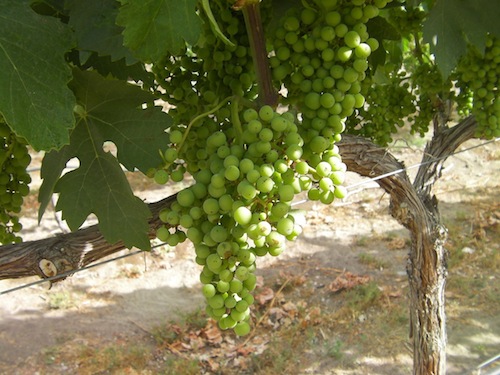 Clusters of Tempranillo – prior to turning red – hang on estate vines at Tildio Winery on the north shore of Lake Chelan in Manson, Wash. (Photo by Andy Perdue/Great Northwest Wine)

One of the Old World’s most famous and beloved grape varieties is little more than a footnote in Washington, but a thirst for Tempranillo is beginning to grow.

The red grape of Spain’s Rioja and Ribera del Duero regions is the fourth-most-planted grape variety in the world at more than a half-million acres of vines. That’s enough for the Tempranillo Advocates Producers and Amigos Society (TAPAS) to celebrate with International Tempranillo Day, which takes place Thursday.

In Washington, there’s ample reason to lift a glass because Tempranillo is gaining a following, even though the rich, rustic red is made on a small scale.

“It’s my baby,” said Katy Perry, owner and winemaker for Tildio Winery on the north shore of Lake Chelan. “I’m a huge fan of Rioja. I always have been.”

Perry and her husband, Milum, began planting their vineyard in 2002 and opened the winery in 2005. Today, they have 3 acres of Tempranillo, which translates into a few hundred cases of a Tempranillo-based blend and two varietal bottlings.

Perry, a former winemaker at Chateau Ste. Michelle, knows that even with a south-facing vineyard overlooking massive Lake Chelan, her Tempranillo is on the edge of viticultural viability.

“When we bought the property in Chelan, I did my research on grape-growing regions in Spain and other areas where Tempranillo is grown,” she told Great Northwest Wine. “I knew it was going to be a close call on winter kill, but I love it so much, I had to give it a try. I thought it was worth trying.”

In the 13 ensuing years, however, they’ve seen damage only once, and that was from an early fall frost in 2009 that cost them several vines. 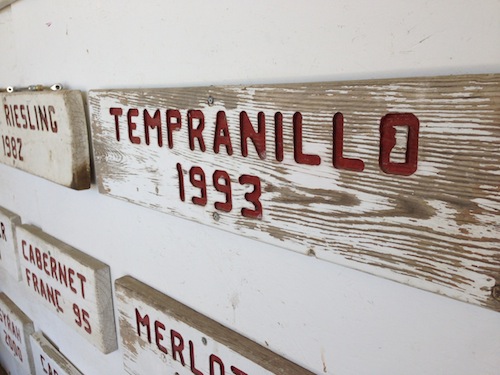 Mike Sauer’s sign for his original Tempranillo – the first planted in the Pacific Northwest – now hangs on his shop wall at Red Willow Vineyard in the Yakima Valley. (Photo by Andy Perdue/Great Northwest Wine)

Mike Sauer planted Tempranillo in 1993 at Red Willow Vineyard in the western Yakima Valley, making his vines likely the oldest in the entire Pacific Northwest.

Sauer, known for planting the first Syrah in Washington (in 1986) and some of the earliest Sangiovese and Viognier, put about 40 vines in the ground as an experiment. During the early 1990s, Sauer was always looking for different varieties to try, and he ran across Tempranillo in a catalog from the University of California-Davis. It listed the variety by the name of Valdapeñas.

“We’re really pushing the southern Mediterranean limit here,” he said. “But it seems like we’ve survived reasonably well. I don’t remember it being frozen out.”

Sauer still has just a small amount of Tempranillo, and he sells it all to Eight Bells Winery in Seattle.

“It’s a novelty,” Sauer said. “I don’t see it ever competing with Syrah, but it’s an interesting wine.” 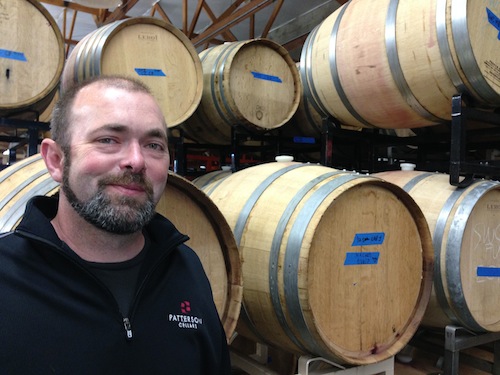 John Patterson of Patterson Cellars in Woodinville, Wash., has been making Tempranillo for about five years. (Photo by Andy Perdue/Great Northwest Wine)

Farther down the Yakima Valley in Prosser, Gordon Taylor of Daven Lore Winery is bullish on the variety. He’s been making Tempranillo for four years, bringing in grapes from nearby Upland Vineyard on Snipes Mountain, which is farmed by the Newhouse family.

“I’ve always loved Rioja,” he said. “It has all the things I like in a wine. It holds oak well, it plays well with others, and it has a beautiful amount of spice. It is fun to work with.”

Taylor makes perhaps 100 cases of Tempranillo per year, and it’s a favorite with his fans.

“I haven’t had any problem selling Tempranillo, that’s for sure,” he said. “Customers are way more willing to try new grapes now than they were 15 years ago. I wouldn’t say Tempranillo is our flagship wine, but it’s right up there.”

Tempranillo, whose name comes from the Spanish word temprano – which means “early” – lives up to its moniker in Washington, Taylor said. He typically brings it in about the same time as Merlot, which is one of the earliest red varieties harvested each year.

He said it ferments well, and he often blends it with a bit of Syrah, Merlot and Petit Verdot.

Fan base grows for Tempranillo

At Patterson Cellars in Woodinville, owner John Patterson has been making Tempranillo for a half-decade. Until this fall, he got his Tempranillo grapes from Elephant Mountain Vineyard in the Rattlesnake Hills district of the Yakima Valley, but he now uses Red Heaven Vineyard on Red Mountain, primarily because it ripens a few weeks earlier there.

In fact, he probably would not have begun making Tempranillo had it not been for Joe Hattrup, owner of Elephant Mountain, who had a bit of the variety available at the end of a harvest.

“It didn’t necessarily fit our profile,” Patterson said. “But we didn’t see a lot of people doing it, and we thought it grew well here and we could market it.”

Patterson tastes a lot of Riojas to see how his wine stacks up, and he has noticed the Washington versions tend to be a little bigger and darker, though they show off typical aromas and flavors of strawberry and raspberry, as well as tobacco and dried herbs.

“Our customers definitely embrace it. It’s a great grape.”