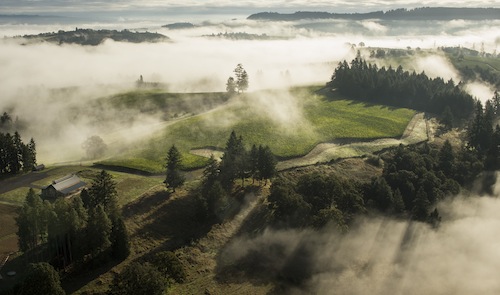 Mineral Springs Ranch, Soter’s estate vineyard, was the source for the top-ranked Northwest wine on Wine Spectator’s annual top 100 list. It came in at No. 17. (Photo by Andrea Johnson/courtesy of Soter Vineyards)

Five wines from the Pacific Northwest made the Wine Spectator’s top 100 list this year, including three from Oregon and two from Washington.

They are, with their rankings:

Last year, wines from Washington and Oregon occupied 10 positions on the Wine Spectator top 100 list, including two in the top 10 (Domaine Serene at No. 3 and Quilceda Creek at No. 10).

This was the smallest number of wines from the Pacific Northwest since 1999, when just three Washington and Oregon wines made Wine Spectator’s top 100.

Wine Spectator is the world’s largest and most influential wine publication.

Harvey Steiman, editor at large for Wine Spectator, covers Washington and Oregon for the publication. He said the small number of Northwest wines were a direct reflection of vintage variation.

“Certainly, ’11 was a difficult vintage, particularly for Oregon,” Steiman told Great Northwest Wine. “2011 is a step back, but not much. These wines are not as showy, not as immediately accessible as other vintages.”

Both 2010 and 2011 were challenges in the Pacific Northwest, especially because of cool weather throughout. But Steiman pointed out this was even more evident in California.

“California took the biggest step back,” he said. “California is not used to seeing that much rain. They did their best, but Mother Nature was not kind to California in ’11.”

Of the five wines selected, only one was from 2011, and it was the Amavi Cabernet Sauvignon from the Walla Walla Valley. The three Oregon wines on the list were all from 2012, considered by many prognosticators to be a near-perfect vintage throughout the Northwest.

Steiman is certain the region will bounce back next year, when the 2012s will be on full display to the Wine Spectator editors.

“There’s going to be a lot of ’12s in next year’s field,” he said. “I’m not going to be surprised if we see more from the Pacific Northwest next year.”

Duane Wollmuth, executive director of the Walla Walla Valley Wine Alliance, said he was a little surprised that only two Washington wines – both from Walla Walla wineries – made the list.

“We’ve had a good run,” he said. “I certainly expect that we will rebound.”

At the top of the Wine Spectator list was Dow’s 2011 Vintage Port. It was one of three Portuguese wines in the top four wines.

“It’s going to be a little controversial,” Steiman said.

The only U.S. wine in the top 10 was the Brewer-Clifton 2012 Pinot Noir from the Santa Rita Hills in California’s Santa Barbara County. It was No. 8.

Steiman said he always looks forward to the top 100 selection process, which is a double-blind tasting.

“It’s a wine in a glass,” he said. “We each taste quietly, we compile the results and see where we stand. Then we start arguing.”

He said a lot of difficult decisions are made, and it’s often difficult to separate truly great wines.

“All of the wines are exciting,” he said. “They all have great stories behind them.”