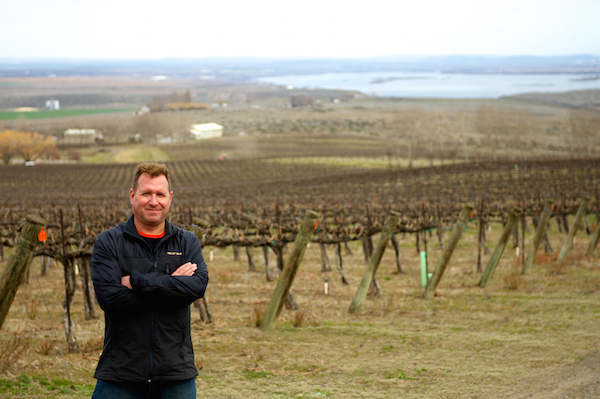 WALLA WALLA, Wash. — Canoe Ridge Vineyard, once one of Washington state’s most important brands, celebrates not only its 20th anniversary Saturday night in Walla Walla but also a revival.

Both the winery and its historic namesake vineyard in the Horse Heaven Hills are back in Washington hands under the ownership of Seattle-based Precept Wine and stewardship of Napa-grown winemaker Bill Murray.

And there’s a remarkable connection between Murray and John Abbott, the winemaker who put Canoe Ridge Vineyard on the map two decades ago. They were cycling buddies in Napa when not working in the cellars for the Chalone Wine Group and Acacia Vineyard.

“I was always proud to tell my friends when I was traveling for Acacia about my friend John Abbott,” Murray said. “Everyone knew Canoe Ridge in the 1990s as a leader for Merlot and other Bordeaux in the state of Washington.”

Abbott, an Oregon State University grad, left Canoe Ridge Vineyard but stayed in Walla Walla and went on to launch Abeja, one of Walla Walla’s first destination wineries and cult brands. Ironically, the focus at Abbott’s winery on Mill Creek Road is on Cabernet Sauvignon and Chardonnay over Merlot. 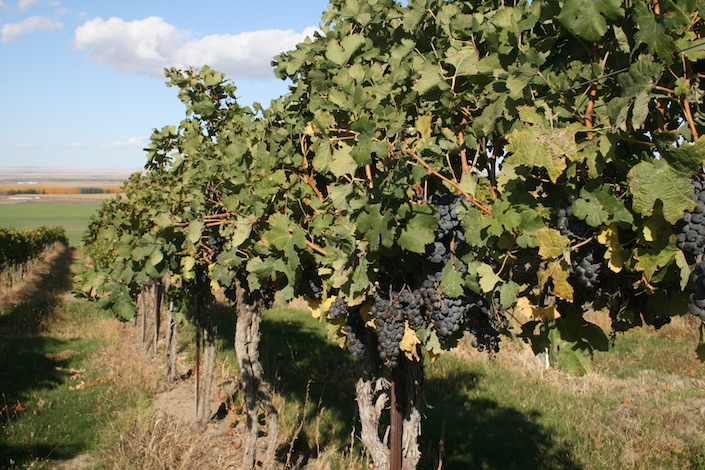 A dozen years ago, it would have been difficult to view Canoe Ridge Vineyard as an overlooked brand, and today, its place in the history of Washington wine tends to be forgotten.

And like all good wines, the story starts in the vineyard. In this case, the tale in the Horse Heaven Hills began 40 years ago with the Tucker family and is tied to the historic crop failure in the Soviet Union of 1972.

“My family started Sandpiper Farms in 1974,” Pat Tucker told Great Northwest Wine via email. “It was primarily an investment to absorb an income windfall from ‘The Great Russian Wheat Deal.’ My dad’s best friend — Bud Pringle — manufactured center pivots at the Walla Walla airport. My dad (Con) and Bud hatched the idea together to develop desert ground to irrigated farmland in the Paterson area.

“I was fresh out of college and was put in charge,” Tucker wrote. “Gary Bergevin was sales manager for Pringle circles. Both he and Bud invested in the project. Gary continued to be a close adviser to me and eventually leased farmland from Sandpiper to grow and sell crops — an arrangement that continues today.”

In a phone interview, Bergevin said, “I was quite interested with what was going on in wine industry and felt that the site of Canoe Ridge would be a good one. We negotiated a purchase agreement with Sandpiper Farms and put together a local group of investors from Walla Walla and started the first phase in 1989.”

It led to 44 acres of Bordeaux varieties in the Horse Heaven Hills.

Bergevin “was definitely the driving force behind Canoe Ridge Vineyard,” Tucker said. “Rick Small (Woodward Canyon), Gary Figgins (Leonetti Cellar) and others were friends of his. I said Sandpiper would put in the land in return for an ownership interest in the vineyard if he could raise the money from others to establish the grapes.”

“Sadly, Gary Figgins was unconvinced of the site and did not join,” Tucker said. 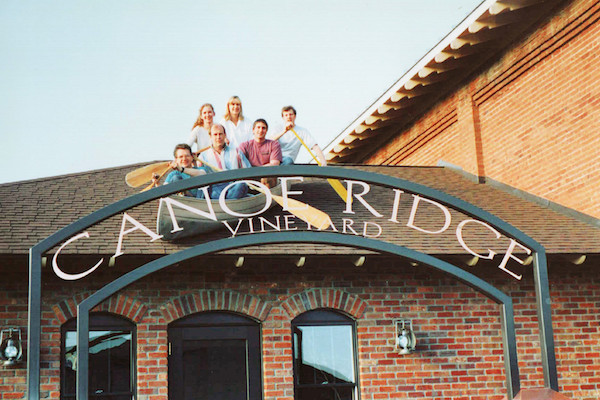 A year later, Canoe Ridge Vineyard would double in size. The spark was Phil Woodward, CEO of Napa-based Chalone Wine Group, who had become infatuated with Woodward Canyon Chardonnay while dining in a Seattle restaurant.

“Phil wanted to invest in Rick’s winery, but Rick steered him away from that and towards Canoe Ridge Vineyard,” Tucker wrote. “Meetings were held in San Fransisco with Phil and his partner Dick Graf, and a deal was struck.”

Bergevin said, “When Chalone came in, they did so as 51 percent owners. At that point, we substantially increased the size of the vineyard, and it became one of the major vineyards in the state at that point in time.”

Tucker said it didn’t take long before a Washington vs. California debate cropped up in the vineyard.

“A dispute over variety was the first order of business,” Tucker recalled. “The Walla Walla group wanted to stay with planting reds, but the San Francisco people insisted on including Chardonnay because ‘We are a Chardonnay company.’

“They prevailed, and the result has been a somewhat undistinguished product,” Tucker continued. “We were crazy excited about the partnership though. They were the very first California group to invest (in the state). That was a feather in our cap. They allowed the Walla Walla group to invest in the winery when it was built.”

By 1994, the vineyard grew beyond 100 acres and the partners built a winemaking facility inside the Walla Walla Traction Co., trolley house. Chalone moved Abbott to Walla Walla in time for harvest, which began Sept. 4.

According to The Wine Project by Vashon Island vintner Ron Irvine and additional research, there were only seven wineries in the Walla Walla Valley at that time — Leonetti, Woodward Canyon, L’Ecole No. 41, Waterbrook, Seven Hills, Biscuit Ridge (now defunct) in Dixie and Patrick M. Paul (now defunct) —  a tiny fraction of the more than 120 wineries now in the valley.

The role of local ownership at Canoe Ridge Vineyard ended in 2001 when Chalone bought out the founding investors’ 49 percent share. The sale reportedly was worth $4 million to the Washington group and also covered their debt.

“We did fine,” Bergevin said. “It was a nice operation with a good vineyard and a good winery, and Chalone marketed the wine and they did a great job. It all worked out pretty well.”

In fact, a number of those investors followed Bergevin to create two Walla Walla wineries — Forgeron Cellars in 2001 and later, Bergevin Lane Vineyards.

“The favorable experience we had with Canoe Ridge led us, and the driving force behind the creation of Forgeron was Jim Abajian,” Bergevin said.

Abajian, who retired and sold his interest in his family’s car dealership in 2000, continues to own Forgeron Cellars with founding winemaker Marie-Eve Gilla.

And in 2002, Bergevin created Bergevin Lane in downtown Walla Walla — not far from Canoe Ridge Vineyard’s winery — with his daughter, Annette, and Amber Lane. They planted Bergevin Springs Vineyard in 2011. 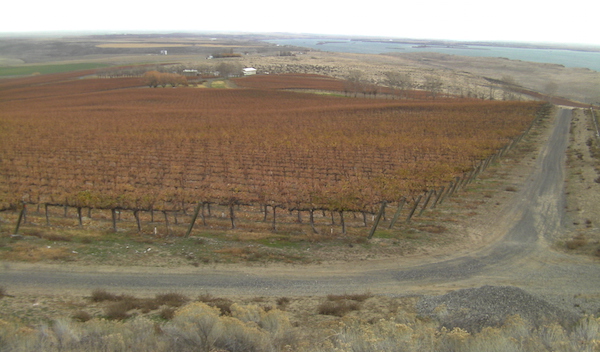 Vines at Canoe Ridge Vineyard harden off in time for winter, but the nearby Columbia River to the south also offers protection from bitter cold temperatures. (Photo by Eric Degerman/Great Northwest Wine)

In 2005, Chalone sold to beverage conglomerate Diageo for $260 million, which meant ownership in Canoe Ridge Vineyard and sister winery Sagelands centered in London — not California.

“Obviously, Diageo became disenchanted with their Washington investment and subsequently sold to Precept,” Bergevin said. “I think Precept has revitalized the brand, and it appears as if they are doing a good job with it.”

Tucker said his dealings with Precept have been pleasant and primarily with general manager Mike Williamson.

“Sandpiper supplies the vineyard water through their system, but I have very little interaction with the vineyard or principals,” Tucker said. “The interaction I have had has all been very positive. Mike Williamson and I completed a complicated property exchange to straighten out property lines and release some title issues on our property, something I was unable to do with the previous owners. I think it is great that they have reopened the tasting room, and I understand the reputation of the product is improved.” 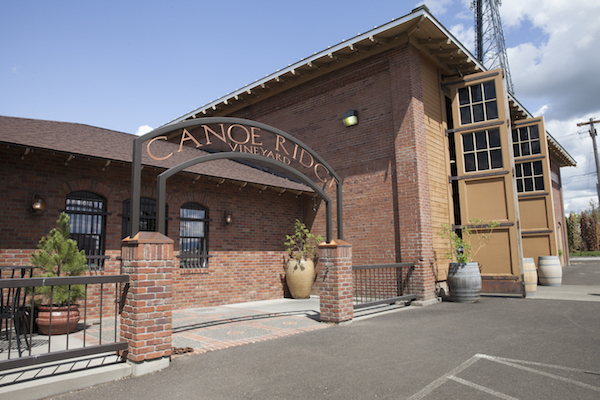 When Murray was hired by Precept, he was told of its pending acquisition of Canoe Ridge Vineyard. Initially, though, he came to the Pacific Northwest to spearhead the winemaking at Sawtooth, and then in 2012, he added Ste. Chapelle to his territory after Brown and Baty reacquired the Gem State’s largest brand from faltering Ascentia Wine Estates.

“I basically left California for Idaho,” Murray said. “I looked at Oregon — which didn’t necessarily excite me — and Walla Walla, but there are so many neat things going on in Idaho. It was shot in the dark for me, but it’s an area that I think has as much potential as Oregon did 30 years ago and Washington did 20 years ago.”

When Precept bought Canoe Ridge Vineyard — both the winery and the vines — production stood at about 15,000 cases.

“By the end, Diageo had put no money into its oak program,” Murray said. “There was very little new oak in the 2009 and 2010 wines in barrel. As soon as we came on board, I addressed some of those oak issues. There also were some diseased blocks in the vineyard, so we began replanting some of the Cabernet blocks and put in Malbec and Petit Verdot.”

Murray took over for Ned Morris, now at Basel Cellars, who left behind wines from the 2009 and 2010 vintages that produced delicious results, including the 2009 Vineyard Select Merlot and 2009 Cherry Street red blend.

These days, Ste. Chapelle remains in the hands of longtime winemaker Maurine Johnson. And now, with Murray having mentored Meredith Smith into one of the Northwest’s rising talents, Precept continues to push his responsibilities at Canoe Ridge Vineyard.

“With the Expedition tier, my case counts for 2014 will be about 90,000,” said Murray, who adds that he leans heavily on assistant winemaker Dan Morrison, another Chalone alum.

Murray continues to play a role in Idaho, and he’s still got a 208 area code for his mobile phone.

“At this point now, I just help out with the blends because I have so much confidence in Meredith and Maurine,” Murray said. 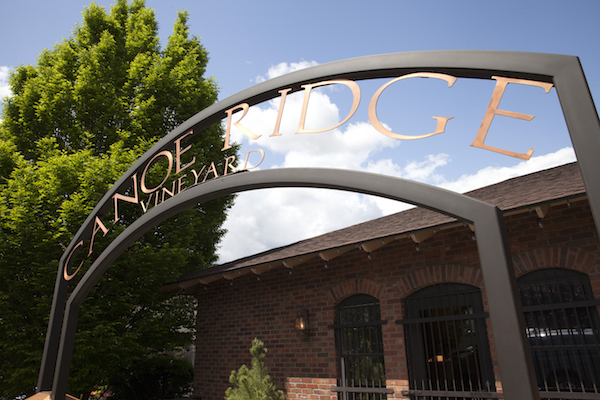 The party, which is open to the public, runs 5-8 p.m. and includes Americana rocker Mark Pickerel of the Dusty 45s, wine discounts and some door prizes.

“We’ll have a slideshow presentation, but I’m not even sure if I’m in it,” Murray chuckled. “There will be live music and appetizers. I’ll see if I can talk the tasting room into opening some of the older vintages. Heck, I may bring some my cellar!” 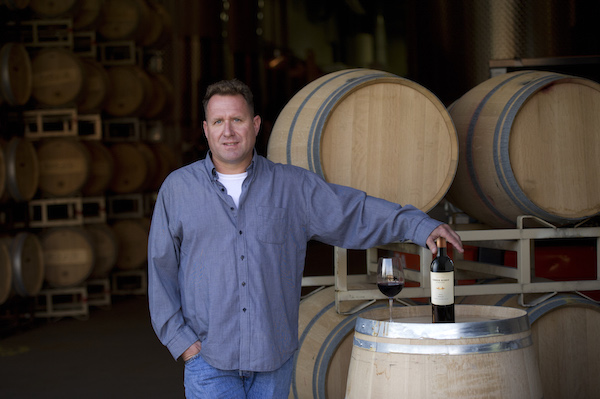 The position at Canoe Ridge Vineyard and Precept seems to be a dream job for Murray. His role as director of winemaking for Ste. Chapelle and Sawtooth allows him to spend a handful of days each month at his condo in Sun Valley.

And he’s back riding his bicycle with Abbott. They often are joined by fellow Chalone alum Kevin Mott, who went from Ste. Chapelle to Sagelands to Canoe Ridge Vineyard before greater fame at Woodward Canyon.

“In the spring and summer, John, Kevin and I ride together,” Murray said. “The rides often lead into beers, and then bottles of wine at someone’s house. Pretty soon, we’re getting into magnums.”

Murray’s connection with Abbott and his partner, Molly Galt, goes beyond that.

“I live at their Heather Hill house in Milton-Freewater,” Murray said. “It’s a beautiful setting at the vineyard with Seven Hills nearby. I haven’t seen John a lot with harvest, but we talk on the phone.”

According to Murray, 49, he owes more to Abbott than just a monthly rent check.

“I used to come up on vacations and stay here with he and Molly and see how he built (Canoe Ridge Vineyard) and had taken it to where it was,” Murray said. “He would take me to the vineyard and show me the amazing quality of fruit with structure and tannin he would get off that site. I was very familiar with it when I got here.

“None of this would have happened at Canoe Ridge Vineyard without him — that’s for sure,” Murray added. “He was laying the path for me to be successful.”