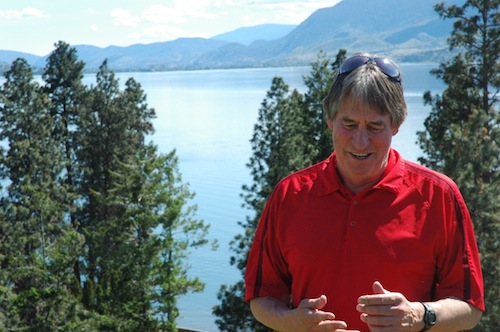 NARAMATA, British Columbia – Kettle Valley Winery is in one of the most remote areas of Pacific Northwest wine country. To get here, you have to want to get here.

But once you do, you’ll be in for an amazing treat: some of the finest red wines around. That’s right: red wines in a region best known for stunning whites.

The wine industry is filled with tales of wineries starting because a hobby got out of hand, but Kettle Valley Winery owners Bob Ferguson and Tim Watts took it way beyond what most would consider viable – or sane.

Here’s our interview with them: 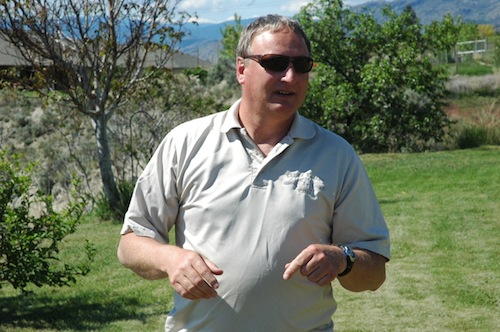 The brothers-in-law got into winemaking in the early 1980s. By 1985, they realized the quality of grapes they were able to purchase was holding them back. Around that time, few European wine grapes were planted in the Okanagan Valley, so they decided to take those matters into their own hands. That’s when they started purchasing land on the Naramata Bench overlooking Okanagan Lake – northwest of Penticton – and planting wine grapes.

“Our wives tried to talk some sense into us, but it didn’t take,” Ferguson said.

Until the early 1990s, the province didn’t offer licenses for small-production wineries, but that all changed when a new law allowed “farm-gate wineries” to exist.

“It’s a good thing the licenses came along,” Ferguson said – because by that time they had 11 acres of grapes planted, and they weren’t planning to sell them to anyone else.

At one point, the pair dragged a couple of tons of grapes up to the Watts’ third-floor apartment in Penticton, where they crushed, pressed and fermented them into wine – much to the chagrin of their wives and neighbors.

It was time to go pro.

“It had gotten away from us,” Ferguson said. “We were enjoying it, and we wanted to prove to ourselves and others that you could grow grapes here that people said you couldn’t do.”

At this point, Riesling, Gewürztraminer and other cold-hardy varieties were being grown – along with French hybrids such as Maréchal Foch and Chancellor. Watts and Ferguson wanted to plant Chardonnay, Pinot Noir and Cabernet Sauvignon. 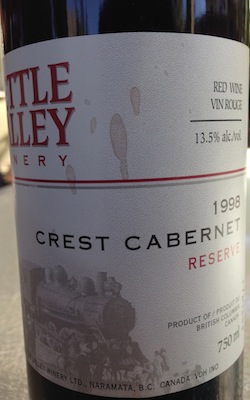 Ferguson and Watts named their winery after the Kettle Valley Railway, which operated in the region from 1915 to 1989. Watts said from one spot along the old railroad tracks, the pair could see all their vineyards below, so that sealed the name.

Though everyone told them they couldn’t grow warm-climate grapes, they were convinced they could.

“We were just thick-headed, I guess,” Ferguson said.

A favorite spot for Cabernet Sauvignon is called Crest Vineyard – “It’s at the crest of a hill,” Ferguson said – and is about 1 acre grown at extremely low tonnage.

“It’s probably not an ideal spot for growing Cab,” Ferguson said. “But it grows some really nice fruit. This year, we’re going to get some spectacular fruit off of it. Growing Cabernet Sauvignon here in the Okanagan is a challenge – and in Naramata is even more of a challenge.”

Ferguson said making red wine like Kettle Valley’s is not necessarily economical, but that isn’t the point. Making great wine is, and the pair are accomplishing that.

In the Similkameen Valley, the pair have established another vineyard, where they are successfully growing Zinfandel. Their newest vineyard is adjacent to the Great Northern Railroad, so they named that parcel Great Northern Vineyard.

They also use railroad-related names for some of their wines. For example, their Port-style dessert wine is called “Caboose.” And their “Brakeman’s Select” is a red blend. 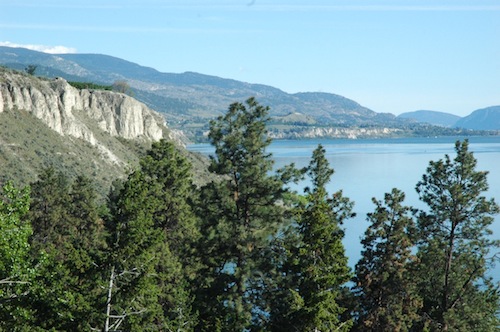 The views of the southern end of Okanagan Lake are spectacular from Kettle Valley Winery in Naramata, British Columbia. (Photo by Andy Perdue/Great Northwest Wine)

As with most British Columbia wineries, finding the wines outside of the province is difficult to nearly impossible. That is no more true than for Kettle Valley wines.

Though Watts and Ferguson produce about 10,000 cases, not a bottle is sold south of the border. And many of their wines are produced in such tiny amounts that most are sold out almost immediately by collectors and fans.

More than 60 percent of their wines are sold through restaurants and private wine shops in the Lower Mainland and on Vancouver Island, and a bit is now trickling into Alberta. The rest is sold through their modest tasting room on the Naramata Bench, which provides spectacular views of the south end of Okanagan Lake.

Those traveling to Vancouver, Whistler or Victoria shouldn’t have too much trouble finding Kettle Valley wines. And Watts and Ferguson said they can even ship wines to someone’s hotel when they’re visiting the province.

And if you’re planning to visit the winery, just drive north on the Naramata Bench road from Penticton and go past about 35 wineries before turning left at the power substation and firehouse. Follow the signs all the way to the end of the road.

It’s worth the trek.