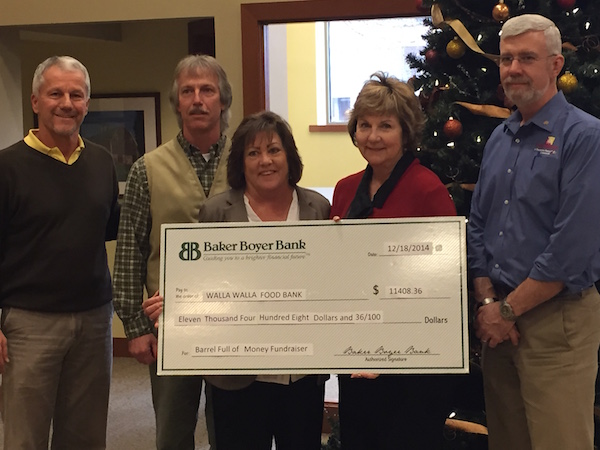 “This community really pulls together to assist those in need,” Wollmuth said in a news release. “We look forward to growing the Barrel Full of Money fundraiser even more in the years to come.”

The fight against hunger has become a high priority in some Pacific Northwest wine regions, and the Walla Walla Valley has created a series of partnerships for Barrel Full of Money. This year, it was collaboration among Alaska Airlines, Baker Boyer Bank, Columbia REA, the Downtown Walla Walla Foundation membership, the Marcus Whitman Hotel & Conference Center, Olive Marketplace & Café, Capps Broadcast Group, the wine alliance and its members.

Kathy Covey, CEO of the Blue Mountain Action Council, said, “The Barrel Full of Money campaign has become one of the Food Bank’s most successful fundraisers, bringing in $41,900 in cash since its inception in 2011.”

BMAC Food Bank distributes an estimated 500,000 pounds of food through pantries in Walla Walla County each year. According to FeedingAmerica.org, a food bank can turn a $1 cash donation into as many as 10 meals. That means the Barrel Full of Money program could lead to more than 100,000 meals in Walla Walla County.

“The cost of basic living essentials continues to rise, making this fundraiser and others even more important to our community,” Covey said.

Donation canisters were placed at wineries and other locations throughout the Walla Walla Valley at the end of October. In addition, two full-sized wine barrels – used as donation vessels – were set-up at Olive Marketplace & Café and the Marcus Whitman Hotel & Conference Center.

Alaska Airlines donated two unrestricted roundtrip airline tickets as the grand prize for the raffle drawing. Second prize in the raffle was a one-night stay at Marcus Whitman Hotel and dinner for two at the Marc Restaurant. Tickets were sold for $10 each, and the winners were drawn during Thursday’s celebration.

The BMAC food bank serves as the regional distribution center for five pantries in Walla Walla County and those in Asotin, Columbia and Garfield counties. More information about the BMAC and its programs is available at www.bmacww.org or by calling 509-529-4980.