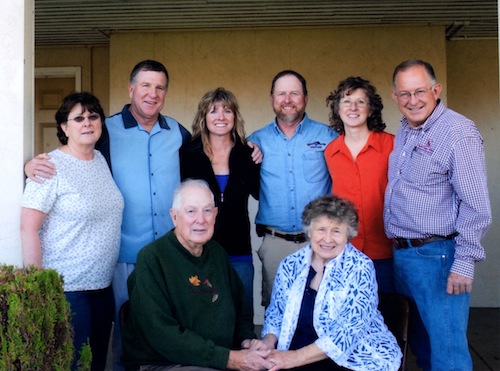 ALDERDALE, Wash. – The patriarch for one of Washington’s greatest wine grape growing families has passed away.

Bob Andrews, 84, died Dec. 15 after a lengthy battle with cancer.

He is remembered by his children as a man who put his family first and provided them an idyllic life growing up on a farm.

“He was a 4-H leader,” said his son Mike Andrews of Coyote Canyon Vineyards. “I remember him teaching me how to drive and how to service all the farm equipment. I loved going to fairs with him. We’d go every year, starting with the local county fairs, then Portland, then California. I loved it because we did it together.”

His daughter Sandy Rowell said growing up on the farm made for happy times.

Bob Andrews was born in 1930 in Yakima. He met his future wife, Louise, while attending Walla Walla High School. Her father, George Smith, was the first to work the land in the Horse Heaven Hills, breaking about 100,000 acres of sagebrush-covered ground prior to World War II. Smith got a farm in 1941 but temporarily had to leave the area because it became a bombing range during the war.

Bob Andrews started working on the farm in the late 1940s, and he and Louise lived in the same house for 60 years before moving to Kennewick a few years ago when he finally retired from farming. In October, the couple celebrated their 65th wedding anniversary.

In the 1950s, Andrews had the foresight to get permits to dig wells that ultimately provided the vital irrigation water that makes his children’s farms successful today.

Alderdale, a community in Washington’s Horse Heaven Hills, is home to some of Washington’s best grapes, including those grown by members of the Andrews family. (Photo by Eric Degerman/Great Northwest Wine)

Rob Andrews, who came home to farm in 1978, credits his father with making the decision to begin planting Andrews Horse Heaven Vineyard at a time when the modern Washington wine industry was in its infancy.

“He was right there backing me,” Rob Andrews said. “If he would have told me no, we wouldn’t be where we are today.”

Today, the Andrews family grows more than 3,100 acres of wine grapes, making it one of the largest family wine grape operations in Washington.

But back in 1984, the future didn’t look so bright. Ste. Chapelle no longer wanted those grapes. Fortunately, a little winery came along looking for fruit. It was called Columbia Crest.

“For the first two or three years, I only met Bob,” said Doug Gore, who was Columbia Crest’s winemaker in 1984 and now is Ste. Michelle Wine Estates’ executive vice president for winemaking and viticulture. “I didn’t realize he had any sons.”

In those early days, Ste. Michelle Wine Estates’ most important estate planting was Cold Creek Vineyard, which is north of the Yakima Valley.

“Crest didn’t get any of that fruit,” Gore said. “But we shared 20 acres of Andrews Cab with Staton Hills Winery (in the Yakima Valley). That Andrews Cab was our best block for years. That was a key component for our Barrel Select wines. We cherished it and were happy when we eventually got the whole block.”

Gore credits Bob Andrews and his children with helping to develop the sparsely populated Alderdale area of the southern Horse Heaven Hills for the wine grape industry. In 1980, there were just a few acres of grapes planted there. Today, nearly 12,500 acres are planted in the Horse Heaven Hills, making it the second-largest concentration of vineyards in the state, after the Yakima Valley.

“We called it ‘Andrewsville,’ ” Gore said. “Bob was a positive guy who helped grow the Washington wine industry.”

In addition to partnering with his son Rob, Bob Andrews later partnered with his eldest son Mike to create Coyote Canyon Vineyard. Mike had been working cattle for several years but decided to try his hand at wine grapes in 1994.

“In 1997, I got a good contract with Columbia Crest, and we continued to plant the acres,” Mike Andrews said. “Dad and I complemented each other.”

Today, Coyote Canyon has 1,135 acres of vineyards, with plans to plant 160 more in 2016. Mike Andrews also owns Coyote Canyon Winery at the Vintners Village in Prosser. One of his reserve wines, the Robert Andrews Mourvèdre, honors his father. Another, the GW Smith Malbec, is a tribute to his grandfather.

Between McKinley Springs and Andrews Horse Heaven Ranch, Rob Andrews has 2,000 acres of vines, with plans to plant another 800 to 1,000 acres in the next three years. He and other family members also own acclaimed McKinley Springs Winery.

Rob Andrews also grows row crops such as wheat and beans. At one time, he and his father grew apples, cherries and pears. Gore said that among his favorite memories was Bob Andrews bringing a box of fresh-picked Asian pears to Columbia Crest each year. Gore said he would have to make sure to be around if he wanted any because everyone at the winery looked forward to taking some home.

But Gore said Bob Andrews was most treasured for those grapes and his attitude toward farming.

“Bob helped Columbia Crest get some really good grapes,” he said. “His grapes were among our very best. Bob was a very fair man and as honest as the day was long.”

Mike and Rob accompanied their father to a special luncheon at Columbia Crest in fall 2002, when the winery unveiled its newly renamed high-end Bordeaux-style red wine, the 1999 Walter Clore Private Reserve. Their grapes made up a large part of that wine, and they sat with Clore, who died a few months later. Bob Andrews later went home with a bottle signed by Clore and Gore, a memento he cherished for the rest of his life.

“That was a pretty big day for us,” Mike Andrews said. “We all went together as family.”

Before he fully retired, Andrews continued to drive semi-trucks to bring the crop to market – and often took his grandchildren with him.

“He was out in the semi with our son hauling wheat up and down the river,” said Rob Andrews. “He’d drop him off later in the afternoon.”

All of them will remember Bob Andrews as a man who put family first.

“He was my hero,” Mike Andrews said. “He set the example we all tried to live up to. He loved his family.”