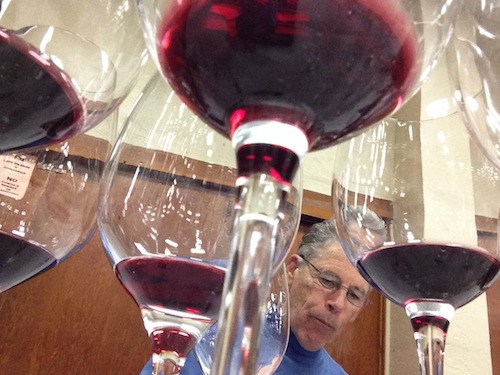 CLOVERDALE, Calif. – Nine wines from Washington and Oregon earned best-of-class distinction at the San Francisco Chronicle Wine Competition, which is the largest judging of American wines.

The judging, which takes place in this community in northern Sonoma County, drew more than 6,400 entries, a record for the biggest competition in North America. Wineries from 28 states entered, and about 60 judges from across the country participated in evaluating the wines.

“It’s great that us Northwesterners can show those Californians a thing or two,” said Howard Rossbach, president of Firesteed Cellars, whose 2011 Riesling from Oregon won best of class for the dry Riesling category.

Firesteed, based in the Willamette Valley town of Rickreall, and longtime winemaker Bryan Croft confirmed their place on this national stage with Riesling. A year ago, the Firesteed 2010 Riesling won a double gold at the San Francisco Chronicle Wine Competition.

“I think we’re on to something,” Rossbach said with a chuckle.

Roger Gamache, who co-owns Gamache Vintners with his brother Bob, said his Cabernet Franc came from the challenging 2011 vintage, and he changed his viticultural practices to produce an award-winning wine.

“We brought the crop down quite a bit – to the 2- to 2.5-ton range to fine-tune the qualities and characters because of the cool growing season,” Gamache told Great Northwest Wine.

Gamache Vintners has a tasting room in the Yakima Valley town of Prosser. The wines are crafted by Charlie Hoppes of Fidelitas Wines. The Gamaches have been growing grapes near the Columbia Valley town of Basin City since the early 1980s.

Sean Hails, winemaker for Columbia Winery, said the grapes for his best-of-class 2013 Merlot came from across the vast Columbia Valley, with a focus in the Horse Heaven Hills and Wahluke Slope.

Hails arrived just before the 2012 vintage from California’s Central Valley, so 2013 was his first full year living in Washington and working for the Gallo-owned Columbia Winery in Woodinville. He said he’s quickly learned that Washington is a special place to make wine.

“Washington does Merlot really really well, and this just shows it,” he said. “I’m excited the judges enjoyed the wine.”

Bob Bullock of Eye of the Needle Winery in Woodinville received best of class for his nonvintage 12th Blend Red from the Columbia Valley — a $15 wine that topped the category for Italian blends priced up to $24.99. Eye of the Needle added to its trophy case with a double gold for its 2012 Reserve Otis Vineyard Merlot.

“That’s pretty exciting. If you can win at the Chronicle, you’ve got something,” Bullock said. “The Chronicle holds weight. I couldn’t care less about putting our wines in front of (Robert) Parker or the (Wine) Spectator.”

It’s also a tribute to the 12th Man — fans of the Seattle Seahawks. The negociant-driven winery produced 6,000 cases of the award-winning blend of Sangiovese (90 percent) and Merlot from the 2012 and 2010 vintage. He created it to pair with tailgate food, and it’s available at grocers throughout the Puget Sound.

“That blend is built for the fans,” Bullock said. “They are not only the loudest fans, but the fans who give back to the community. It’s been a lot of fun, and we’ve sold about 5,000 cases since June.”

Last year marked the start of Eye of the Needle’s support for Northwest Harvest.

“That wine is part of the Bottles for Bread campaign,” Bullock said. “For every bottle of that wine that’s sold, two meals are donated to the food bank. We just wrote them a check for 100,200 meals. We’ll try to make it 200,000 next year.”

Tim Donahue, enology instructor and winemaker for Walla Walla Valley Community College, was in the middle of a lecture Friday morning when he received news of his school’s best of class award for Muscat with their College Cellars 2014 Red Boar Vineyard Muscat Ottonel.

“The students got up out of their chairs and cheered,” Donahue said. “They were super excited. It was a pretty special moment.”

About 200 cases of the 2014 Muscat were bottled, and it’s mostly available through the College Cellars tasting room on campus.

“This Muscat is really special to us,” Donahue said. “It’s grown by a chef in our culinary program who grows 1 acre of it on Wallula Drive.”

The school’s viticulture and enology program, which began making wine commercially in 2002, first produced Muscat in 2012.

“When I came on in 2010, they pretty much made all red wine,” Donahue said. “Myles Anderson of Walla Walla Vintners was leading the show, so that was expected, but it’s important for our students to know how to make white wine, too. Most winemakers will tell you that it’s more difficult to make white wine. So if you know a winemaker who makes good white wine, they’ll also make good red wine.”

Firesteed’s 2,000-case program for Riesling ($13) sources not only its estate Erratic Oaks Vineyard near the winery, but also cooler sites in the Cascade foothills and the Rogue Valley.

“The fermentation is on stainless steel, but then we elevate the wine in large French oak ovals, much like they do in Alsace,” Rossbach said. “It’s to allow for oxygen exchange and to get the wine a far better mouth feel. We don’t rush it out because we think the wine really develops.

“I’ve been in the wine industry in Northwest for 40 years, and I always have gravitated toward wines that are balanced,” he continued. “I don’t like fruit bombs, but I like wines that develop. We think that’s great for consumers and great for restaurants.”

Rossbach said he enjoys his dry Riesling (0.7 percent residual sugar) with lobster from the East Coast and Dungeness crab from the West Coast, as well alongside spicy Pacific Rim cuisine and some Mexican food.

“It’s also great by itself, and I’m going to have some tonight!” Rossbach said,  who also earned a double gold for its 2013 Rosé.

The week also produced a strong showing for Walla Walla-based Long Shadows Vintners. The Dance 2013 Chardonnay and 2013 Pirouette each picked up a double gold medal, while the Nine Hats 2013 Riesling won a gold medal.

Seattle-based Precept Wine, the second-largest wine producer in Washington, fared nicely with a best of class award for the Canoe Ridge Vineyard 2013 Expedition Cabernet Sauvignon, which won in the $14.99-and-under category. Waitsburg Cellars’ 2013 Cheninières Old Vine Chenin Blanc from Snipes Mountain in the Yakima Valley was awarded a double gold.

Mercer Estates received a pair of double gold medals with its 2012 Cabernet Sauvignon and 2013 Sauvignon Blanc to go with gold medals for the 2013 Zephyr Ridge Reserve Chardonnay and 2013 Viognier.

Dusted Valley Vintners, one of many Walla Walla wineries with a tasting room in Woodinville, earned a double gold medal for its 2011 Cabernet Sauvignon and 2012 Petite Sirah in addition to a gold for its 2012 Stained Tooth Syrah.

Wahluke Slope winery Milbrandt Vineyards received a double gold for its 2012 The Estates Malbec and gold medal for its 2012 Traditions Cabernet Sauvignon.

Barnard Griffin opened the competition calendar picking with two gold medals — the 2013 Syrah and yet another gold medal for its pink program with the 2014 Rose of Sangiovese. It marked nine times out of the past 10 years that the Richland winery has produced a gold medal for its rose, and several of those vintages won the sweepstakes for best rose.

Blooms Winery on Whidbey Island did a golden job with both 2012 Malbec and 2012 Syrah.

Here are the Northwest results:

Eye of the Needle NV The Eye, Columbia Valley, $11