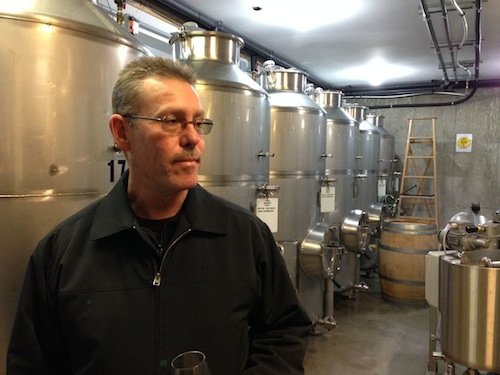 OKANAGAN FALLS, British Columbia – Some of the best Pacific Northwest wines you’ve probably never tasted could become available south of the border in the not-too-distant future.

Wild Goose Vineyards, which has been making wine for a quarter-century in the tiny town of Okanagan Falls, has been available only to Americans willing to cross the border into Canada and bring the wines home.

But the owners of Wild Goose Vineyards hope to change that in the next 12 to 18 months. That leaves us with the salivating hope of having easier access to the world-class white wines of Hagen Kruger, a second-generation winemaker.

We recently traveled north to meet with Hagen, his brother, Roland, and their father, Adolf (who also goes by the nickname of Fritz), at their winery less than an hour from the U.S. border. 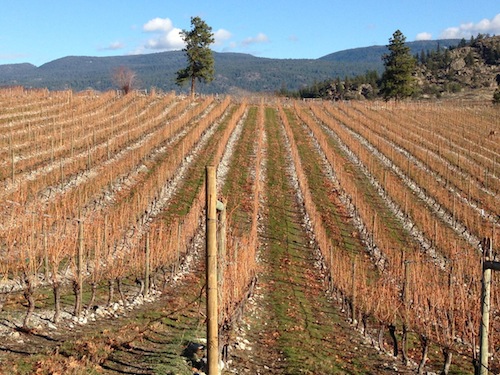 Stoney Slope Vineyard was first planted in 1984 by Fritz Kruger and his sons, Hagen and Roland. In 1990, they launched their winery, Wild Goose Vineyards. (Photo by Andy Perdue/Great Northwest Wine)

Wine does not come naturally to the Kruger family. Fritz grew up in East Germany, where family members would make occasional wine from berries, including red currants. When he emigrated to West Germany in 1949, he arrived penniless in the Rhine Valley.

“Wine was cheaper than beer,” he told Great Northwest Wine. “So consequently, we drank wine!”

That wine was Riesling, and his taste for the noble white variety stuck with him, even after he married and moved to western Canada. When he semi-retired after working in the Lower Mainland, he moved his family to the Okanagan Valley. A friend of his had a vineyard, so Fritz decided to do the same thing, planting Riesling and Gewürztraminer in 1984. He was one of the few to grow European varieties, as much of the province was planted to cold-hardy French hybrid grapes such as Chancellor, Marechal Foch and Okanagan Riesling – which isn’t Riesling.

“We planted our vineyard in 1984,” said son Roland. “The intent was to grow a few grapes and sell them to other wineries.”

But along the way, the family saw an opportunity to get into the winemaking business, so Fritz joined a couple of other grape growers to lobby the provincial government to allow small wineries to exist. In 1990, Wild Goose Vineyards obtained one of the first “farm gate winery” licenses. 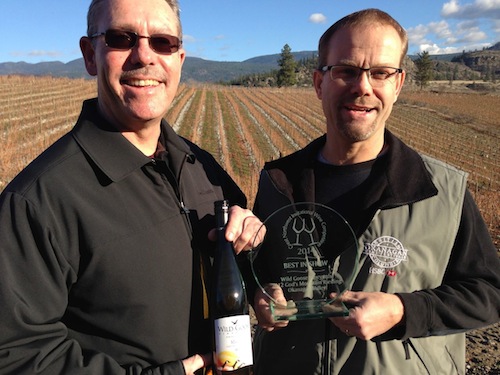 Hagen, left, and Roland Kruger hold up their best-of-show award for their 2012 God’s Mountain Vineyard Riesling, which was the best wine at the 2014 Great Northwest Invitational Wine Competition. (Photo by Andy Perdue/Great Northwest)

From the beginning, Fritz and his sons have been partners in Wild Goose Vineyards. For the first eight years, Fritz was the winemaker, and in 1998, Hagen took over the cellar. With Roland as the general manager, the two make a formidable team.

“Hagen is the ultimate winemaker,” Fritz said. “And Roland is the perfect businessman. Between the two of them, it’s been an absolute success.”

That success has been in great evidence for the past several years. Since 2006, Wild Goose Vineyards has earned 19 Platinum medals in Wine Press Northwest magazine’s year-end best-of-the-best judging. Of those, 18 have been for such white wines as Riesling, Gewürztraminer, Pinot Blanc and Pinot Gris. But last year, a red Bordeaux-style blend called Red Horizon Meritage came out amid the best wines.

In 2009, the publication named Wild Goose Vineyards as its Pacific Northwest Winery of the Year on the strength of its showing in regional, national and international wine competitions.

Much of their success comes from estate vineyards. In particular, the Krugers’ Mystic River Vineyard just north of Oliver, B.C., stands out. When they purchased it, the Krugers inherited a rundown vineyard that was planted to what they viewed as the wrong varieties. They pulled out the grapes, replanted to Pinot Blanc and Gewürztraminer and have been crafting some of the province’s best wines from it ever since.

“The wines coming from that vineyard are unique,” Hagen said. “I don’t have to do much in the winery.” 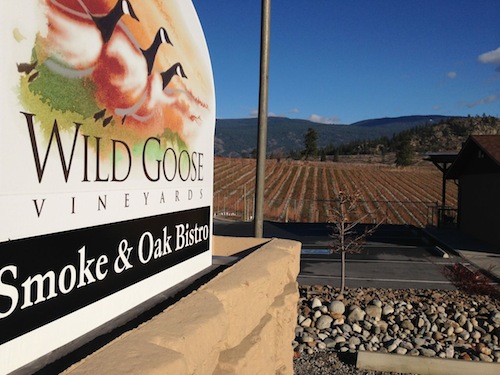 A couple of years ago, the Krugers set out to remodel their humble and cramped operation. Part of the plan was installing a 1,200-square-foot deck that overlooks their Stoney Slope Vineyard – and those original 1984 vines. Unfortunately, according to provincial law, they were unable to serve patrons a glass of wine on the deck.

But if they served food, then they would be able to also sell glasses of wine on site. So Roland approached his brother and father with the idea of providing plates of charcuterie or cheese as a way of getting around the legal issues and also providing a relaxed experience for visitors.

“But for two guys who really enjoy their foods, they shot me down very, very quickly,” Roland said, adding that he had to explain to his partners exactly what charcuterie is.

Instead, they decided to open a restaurant, called Smoke & Oak Bistro.

“We looked at the success of a lot of the winery restaurants here in the valley, and everybody had a unique concept,” Roland said. “We finally came to the conclusion that nobody had something that was family-friendly comfort food. We’re very much a down-to-earth winemaking family, and we thought we would like to introducing something people would really enjoy.”

So they bought a smoker barbecue in Tennessee, hired a chef and began barbecuing ribs, chicken and more. They didn’t want to serve French fries, so they turned to their German heritage and began making späetzle, a type of noodle.

“People go nuts over it,” Fritz said, describing the restaurant’s cuisine as “Southern food with a German soul.”

Reviews during the inaugural 2014 season have been strong, with high praise coming from across the province.

“We had just an amazing first year,” Roland said. “The concept was exactly what the consumer was looking for. It matched up really, really well with all the wines we’re producing.”

Any plans to serve poutine, the gravy-and-cheese-curd-laden fries that are weirdly popular in eastern Canada?

“No,” Roland said firmly. “You have to go to Quebec for that.”

The success of restaurant proved to be a highlight during a somber summer that saw cancer claim Susie — the family’s charming matriarch — at the age of 80. 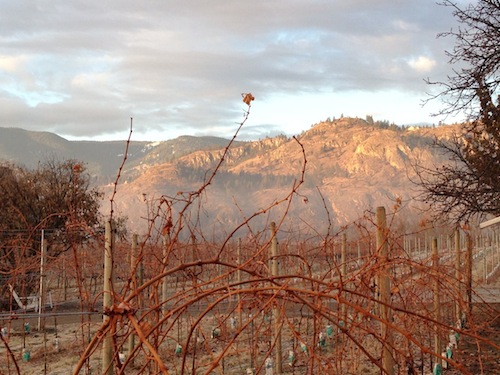 Mystic River Vineyard is near Oliver, British Columbia, and is one of Wild Goose Vineyards’ estate plantings. (Photo by Andy Perdue/Great Northwest Wine)

As is the issue for nearly all the wineries in the Okanagan Valley, getting wines across the border is nearly impossible, which is just as frustrating for the Krugers as it is for their fans in Washington and Oregon.

“There are a lot of barriers,” Roland said, adding that he also has trouble just getting his wines into other provinces, much less the United States. “This year, we did see some headway getting wines into the U.S. It looks like there have been some in-roads made, and I certainly foresee that down the road here.”

In fact, he hopes to make progress in the area of exporting to Washington in the next 12 to 18 months.

“Seattle’s not very far away from us,” he said. “It is amazing to have such a large marketplace so close to you. We would love to not only sell the wines, but also to introduce Americans to what we’re doing up here in Canada because there are remarkable wines being produced up here, and we would love to share them.”

For those who don’t want to wait, a drive to the Okanagan Valley or – for those living west of the Cascade Mountains – to Vancouver or Victoria will yield Wild Goose Vineyards wines at many retailers.

After more than 30 years of growing grapes and a quarter-century of making wines with his two sons, Fritz Hagen is in a happy place, knowing his legacy will continue with his hard-working sons.

“I have no words,” he said, a bit misty eyed. “No one is more blessed than me with having these two guys around. My life has been absolute perfection in that respect. I don’t think I could have it any better.”