Women Stars of Food and Wine returns to Seattle 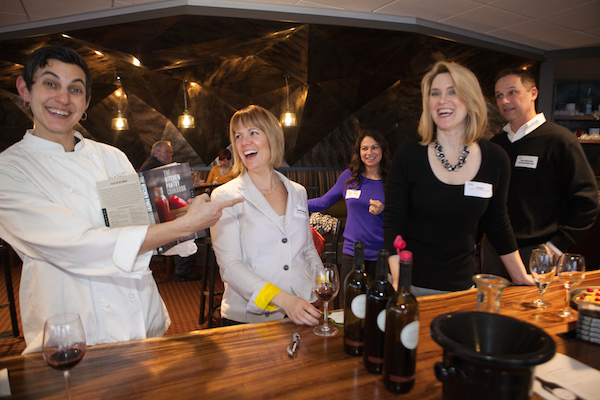 SEATTLE — Thanks to the success of the Seattle Seahawks, it’s getting easy for folks to mark the Women Stars of Food and Wine on their calendar — the Sunday after Super Bowl Sunday.

“They seem to have been very careful to have it after that and not on a Seahawks game day,” said Natalie Barnes-Conway, co-winemaker of Latah Creek Wine Cellars in Spokane. “If it had been the same day as the Super Bowl, my husband would have killed me!”

The second annual Women Stars of Food and Wine will be Sunday, Feb. 8, and it returns to the tony Columbia Tower Club. Even the teetotaler and designated driver can enjoy the delicious and fun opportunity of looking down from the 75th floor of the Northwest’s tallest building.

“We are in non-traditional female roles, and to be part of that group, in the Columbia Tower Club and with those talented women chefs, what could be wrong with that?” said Kelly Hightower, co-winemaker of Hightower Cellars on Red Mountain. I’m really excited to go back. It’s a nice event, and I think it’s good to celebrate the women of this industry.” 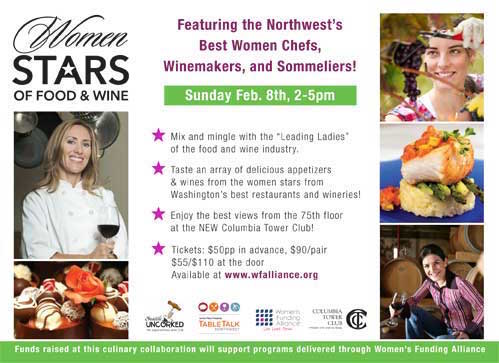 Jessica Munnell, winemaker for Mercer Estates in Prosser and her own Wautoma Wines brand, said, “For me, it’s an honor to be surrounded by so many talented women winemakers, chefs and sommeliers. Along with celebrating some of the powerhouse women in food and wine, this event is partnered with the Women’s Funding Alliance, which helps better the lives of women and girls around Washington state — an absolute perfect pairing. It’s an opportunity to come out and enjoy some amazing food and wine, and support women.”

Last year, a Sunday morning snowstorm didn’t put a major damper on the debut of Women Stars of Food and Wine in Seattle.

“I was impressed with how many people were there, and the people who were there — unlike other events — were actually interested in tasting the wines,” Conway-Barnes said. “The people there seemed more wine-savvy. And they also have sommeliers walking around with bottles offering blind tastings. Some people who won’t try certain wines because they have preconceived notions.”

Hightower said the event’s early success is partly because of its organizer — sommelier David LeClaire. He leads Seattle Uncorked, a wine-based social club, and founded Wine World & Spirits before landing at Esquin Wine and Spirits.

“We just finished our 18th harvest, and through the years we’ve attended several of his events and have always been very pleased with the outcomes and the connections we make,” Hightower said. “David always puts his stamp or signature on them in some way, and they are not your usual events.”

Another of the special touches at this show — created by Seattle sommelier Natashia Remchuk Munson — is the food-and-wine pairing concept. Barnes collaborated with a chocolatier on a chipotle truffle with the award-winning Latah Creek Moscato.

“The pairings really highlight that restaurant or chocolatier, but it also highlights the wines and the winemaker’s style,” Conway-Barnes said. “That’s another way of getting people to try your wines — by offering a food pairing they wouldn’t otherwise think about. As soon as they do try it though, most of the time they like it.”

“Sweetbreads sounds a little risky, but I’ve had them with our wine before,” Hightower said. “The first time was with our Merlot at Gramercy Tavern in New York. They were on the bar menu, and they warned me, ‘You know, they are neither sweet nor bread, right?’ ”

The winemakers said there also sales to be made at the Women Stars of Food and Wine. Conway-Barnes noted one of her wines went on to become one of the monthly features last year at the Columbia Tower Club.

While the snowstorm prevented some chefs and a number of wineries from making last year’s debut, Hightower said she’s had no trouble talking her co-winemaker/husband, Tim, into again helping her at the Women Stars of Food and Wine.

“He loves it because he’s surrounded by all these great women,” Kelly chuckled. “The camaraderie in the Washington wine industry is part of what drew Tim and I to this business. The people are wonderful, interesting and intelligent.”

“We are still in the process of confirming winemakers,” LeClaire said.

A ticket costs $50 in advance or $55 at the door. Purchase a pair of tickets ahead of time and the price is $90. Columbia Tower Club members receive a deeper discount.

And for the second straight year, a portion of the proceeds will help support the Women’s Funding Alliance, a 30-year-old organization that assists women and girls throughout the state.