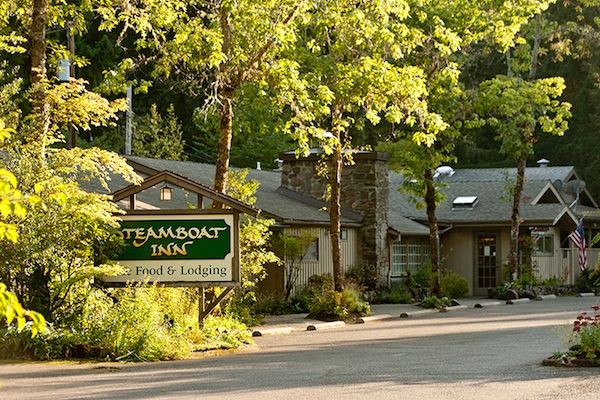 Steamboat Inn was founded along the North Umpqua River in 1957 in Oregon. It has served as the home for the Steamboat Pinot Noir Camp since 1982. (Photo by John Valls/Courtesy of Steamboat Inn)

This year, there are fewer opportunities for the public to experience one of these special evenings along the North Umpqua River. In 2015, there are 21 guest chef/winemaker dinners scheduled, compared with the record 26 staged in 2014.

If tradition holds true, most of the dinners will be sold out before the series begins in traditional fashion with Stephen and Gloria Reustle of Reustle Prayer Rock Vineyards in nearby Roseburg.

Another of the highlights will be Saturday, May 2, when longtime participants Stephen Cary of Yamhill Valley Vineyards and legendary Nick Peirano — founding chef of Nick’s Italian Cafe in McMinnville — collaborate on another dinner. Peirano could not make it last year, breaking a string of joint appearances.

As usual, the lineup shakes up a bit each year to keep the series fresh. At this point, only nine winemakers who appeared in 2014 are scheduled to return this spring.

Each dinner, which includes wine, costs costs $90 per person unless otherwise noted. The evening begins with appetizers served in the library, followed by three savory courses and capped by a dessert.

Lodging is available nightly at seasonal rates and is based upon occupancy.

Here’s a look at the fascinating history surrounding the Steamboat Inn, the dinner series and managing partner/chef Patricia Lee.

For more information contact Patricia Lee at 800-840-8825 or SteamboatInn@Hughes.net.

28 — Michael Etzel of Beaux Frères with chef Paul Bachand of Recipe: A Neighborhood Kitchen in Newberg

18 — Mark Gould of Ken Wright Cellars with chef Vitaly and Kimberly Paley of Paley’s Place, The Imperial and Portland Penny Diner. Signed copies of The Paley’s Place Cookbook, Recipes & Stories from the Pacific Northwest are available for $35 per copy.

24 — Terry and Sue Brandborg of Brandborg Vineyard and Winery with chef John Newman of Newman’s 988.

15 — John Abbott and Molly Galt of Abeja with chef Scott Dolich of Park Kitchen and The Bent Brick.