YAKIMA, Wash. — Consumers may not realize the Yakima Valley produces many of the state’s top wines, so some of those vintners and growers will pour a number of those highly acclaimed wines at Secret Crush, a new nighttime event Feb. 13 in downtown Yakima. 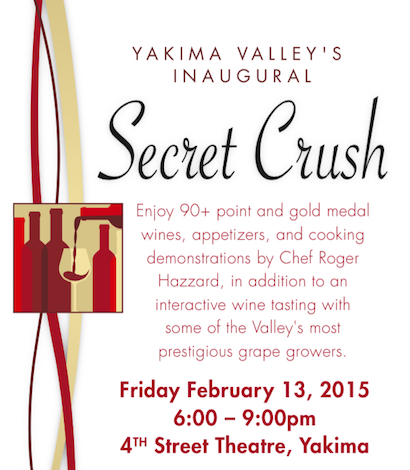 Secret Crush, presented at the Fourth Street Theater on the eve of Valentine’s Day, serves as the official kickoff to Red Wine and Chocolate Weekend in the Yakima Valley. The temptation of Yakima Valley wineries presenting only their medal winners, 90-point wines or those in small production should be enough for wine lovers to risk leaving their home on a wintery Friday the 13th.

Cost is $75, and the three-hour evening will be limited to about 200 patrons.

“Wine Yakima Valley, with Barb Glover, is working on how we can continue to keep the focus on quality coming out of the Yakima Valley, and I’ve been one of those helping to tell that story for the last couple years,” said Kerry Shiels, winemaker for her parents’ acclaimed Côte Bonneville brand from their renowned DuBrul Vineyard. “We really support the message of the fact that the Yakima Valley has so much quality and that most of the high-end wines in the state are made with Yakima Valley fruit.”

Some of those wines start with fruit from DuBrul Vineyard, in the heart of the Yakima Valley American Viticultural Area. The Shiels’ list of customers is indeed elite, including famed Betz Family Winery, DeLille Cellars, Owen Roe and Woodward Canyon as well as cult brands such as Pursued By Bear, Rasa, Va Piano, Kevin White and Woodhouse Wine Estates.

David O’Reilly, who moved Owen Roe’s vinification facility from Oregon’s Willamette Valley to the Yakima Valley in large part to be closer to DuBrul and Red Willow Vineyard, will be among the star-studded lineup at Secret Crush.

“It’s really the first time that event like this has happened in the Yakima Valley,” said Glover, executive director of Wine Yakima Valley, which promotes member wineries and vineyards. “To get the best wines together and put them in one place for consumers, that’s really exciting.

“We’ve been talking about doing something like this for several years,” Glover added. “It’s important for us to add new elements and updates to our great events in the valley, those with a longstanding history like Red Wine and Chocolate.”

“That’s more than 40 wines, but that doesn’t include the growers who are pouring wines made from their vineyards, so there will be nearly 50 wines,” Glover said. “It’s a great lineup of wines, some of them I haven’t tried but some are my absolute favorites.”

Jonathan Sauer will be pouring a few wines made from his family’s Red Willow Vineyard near the western boundary of the AVA, and Hazzard will present small bites to help showcase those wines. Todd Newhouse will bring bottles created from Upland Vineyard and Snipes Mountain fruit, and Joe Hattrup will represent his Elephant Mountain Vineyard and explain the subtleties created from those grapes, which produced Great Northwest Wine’s No. 1 wine of 2014 — the Maryhill Winery 2011 Hattrup Farms Marvell GSM.

“In time, I see this event as one that highlights the growers more,” Glover said.

“The 2006 Carriage House, for example, is not a wine that you are going to pour for 500 people who are coming through your tasting room, so this really does offer a completely different experience,” Glover said.

Historically, it’s the oldest grape-growing region in the state, and it was the first AVA established in the Pacific Northwest. While the Yakima Valley continues to serve as the cradle of the Washington wine industry, it suffers from a PR problem. In fact, some wineries in Walla Walla and Woodinville choose to have their bottles carry Columbia Valley as the AVA rather than Yakima Valley. It’s an issue that rankles Wine Yakima Valley members.

On Valentine’s Day, the Shiels family will open a tasting room for the first time. Until now, visits to sample Côte Bonneville and Carriage House wines were available only by appointment. That changed when Kerry’s father, Hugh, retired as an orthopedic surgeon, which allowed the family to transform his Sunnyside office — once a historic train station — into their new tasting room. They also will use the occasion to unveil their 2013 Train Station Cabernet Sauvignon, marking the first new wine created for the 3,000-case brand in several years.

“It’s exciting,” Kerry said. “It’s coming quickly, and everything is falling into place. In addition to the winery and helping to get the tasting room ready, I’ve spent a lot of time on the road talking about the Yakima Valley. I think it’s great that there are more and more producers upping their game and moving their production to this part of the state. That story tends not to get told as much as it should.”

The Fourth Street Theatre, the backdrop for the debut of Secret Crush, will accommodate about 200 patrons, but not much more, said Glover, who looks forward to an evening with men wearing slacks and women in casual winter dresses.

“It’s a sleek, modern room with all-black walls,” she said. “I’m excited about the venue.”

Secret Crush starts at 6 p.m. and while a ticket cost $75 per person, an additional $20 will buy wine lovers a Premier Pass to Red Wine and Chocolate Weekend. A Premier Pass, normally $35, leads to a weekend of VIP treatment with food-and-wine pairings, library tastings and tours not available to the public.

“Secret Crush is one of the ways for us to change and move with the times, and this really does appeal to a different audience,” said Glover, who’s been mapping out Secret Crush since last summer. “It should be a nice, complementary experience to Red Wine and Chocolate, and these wines will not be something that wineries will be pouring during Red Wine and Chocolate.”

“In February, there can always be a weather event,” Glover said. “I am promoting it (in the Puget Sound), but heavier on the eastern side of the mountains. If the weatherman says there’s a chance of snow, that’s a scary thing for people.”

Taking all that into consideration, Shiels said the early success of Secret Crush likely will depend upon support from Yakima Valley residents.

“The more people in the Yakima Valley truly believe in the quality of our wines, the better off our industry is,” Shiels said. “It’s good for civic pride to be in the middle of a world-class region, and it’s one of the reasons why people have chosen to live here, play here and work here. And that’s good for the community.”