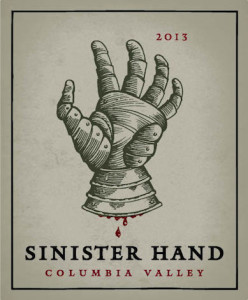 Yakima Valley winemaker David O’Reilly’s crowd-pleasing GSM is dominated by Grenache (64%) in this bottling, which also includes Cinsault as well as Syrah and Mourvèdre. The nose is filled with blackberry, plum jam and dried blueberry, picking up cola nut and white pepper along the way. Ripe blue fruit dominate the flavors amid an easy-drinking structure that brings along chocolate-covered pomegranate, elderberry, lime peel and a pinch of black pepper. Unfortunately, production fell off by more than 80 percent compared with earlier vintages, which saw as many as 3,700 cases created. However, the ardent following for this wine may inspire a similar passion as the story behind the name — an Irish rival cutting off his own hand and throwing it ashore during a rowing competition in order to cleverly be the first to touch — and claim — a prized parcel of land.