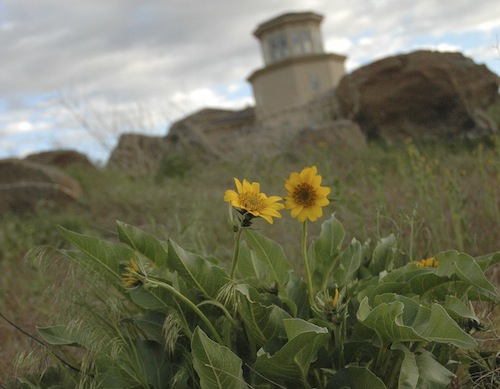 The Estate at Destiny Ridge is a castle-like structure that looms above Destiny Ridge Vineyards in Washington’s Horse Heaven Hills and the Columbia River to the south. (Photo by Andy Perdue/Great Northwest Wine)

ALDERDALE, Wash. — Another castle has risen above the Columbia River and its basalt cliffs as it runs west toward the Pacific Ocean, and this is poised to become another iconic building in Washington wine country.

Alexandria Nicole Cellars announced that it has purchased the castle-like structure that looms over its building and is visible from the Oregon side of the Columbia Gorge.

The distinctive and seemingly out-of-place castle was built a few years ago by Hope Moore, owner of Heaven’s Cave Cellars, a winery she launched to help raise funds for her Make the Dash Count Foundation. Make the Dash Count was founded in 2003 in Gig Harbor, Wash., and supports youth entrepreneurism.

Moore built the castle on land adjacent to Destiny Ridge Vineyard purchased from the Mercer family, and her wines came primarily from grapes purchased from owners Jarrod and Ali Boyle.

Moore operated a tasting room for Heaven’s Cave in Prosser, and the castle’s original intent was to be a home and event center for her winery. She has since retired from the wine industry and shuttered Heaven’s Cave.

This gave the Boyles an opportunity to purchase the 8,200-square-foot building, which they are rechristening “The Estate at Destiny Ridge.” Alexandria Nicole Cellars, with popular tasting rooms in Prosser and Woodinville, has a rabid fan base and wine club, and the Boyles plan to incorporate the castle into their always-fluid hospitality program.

“We’re hoping to open it by May,” said Jarrod Boyle. “Realistically, it’ll probably be June. Our plan is to open the bottom for a tasting room, weddings and events.

Not the region’s first castle 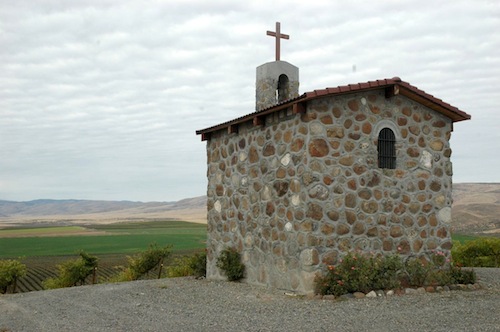 Mike Sauer began building this chapel at Red Willow Vineyard in 1992 in the western Yakima Valley. It is modeled after La Chapelle in Hermitage, which overlooks the Rhône River.

The most famous castle in these parts is now known as the Maryhill Museum of Art, about an hour to the west of Destiny Ridge. The imposing and out-of-place building overlooking the Columbia River originally was to be the residence for Sam and Mary Hill. But after it was completed, Mary Hill didn’t want to live there.

It ultimately became a museum in the 1940s and today houses an amazing and eclectic collection, including original pieces by Rodin, chess sets, Native American art, the queen of Romania’s wedding dress and Eastern Orthodox icons.

The Estate at Destiny Ridge might be one of the more unusual buildings in Northwest wine country, but it certainly is not alone. Perhaps the oddest structure is a pyramid at Summerhill Winery near Kelowna, British Columbia, which is modeled after the Cheops Pyramid on Egypt’s Giza Plateau.

And the most iconic building in Washington wine country is a small stone chapel atop a steep hill at Red Willow Vineyard in the western Yakima Valley. 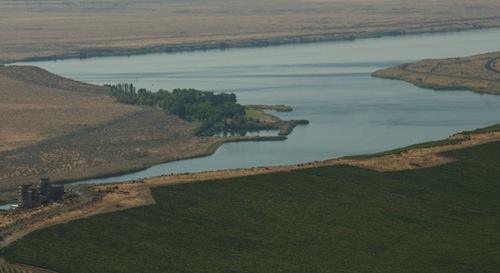 The Boyles firmly believe they can turn the castle into an experience in Washington’s Horse Heaven Hills that will become a fond memory for anyone visiting it.

“Our hope is that it can become an iconic building in the Horse Heaven Hills,” Jarrod Boyle said. “But that has to be earned.”

And though the region is sparsely populated and lightly traveled (most traffic goes down Interstate 84 on the Oregon side of the Columbia River), the Boyles are confident the castle will help lure more visitors to the region.

“We used to have tastings out of our production facility (at Destiny Ridge Vineyard),” Jarrod Boyle said. “It was amazing how many people would come by.”

He believes there is adequate traffic, and this will be one more reason to draw visitors. Columbia Crest is just 13 miles to the east, and Chateau Ste. Michelle’s red winemaking facility is 2.2 miles away. The latter has a tasting room that Ste. Michelle has experimented in the past with opening during summer months.

Not far away are McKinley Springs Winery’s tasting room, as well as Chateau Champoux.

“Wine lovers anticipate and appreciate the experience of driving through all the vineyards in wine country,” Boyle said. “It’s more authentic.”

And while the region is seemingly in the middle of nowhere, it’s also less than three hours from Spokane, Seattle and Portland – close enough for a weekend in wine country.

Close to the heart for Alexandria Nicole Cellars 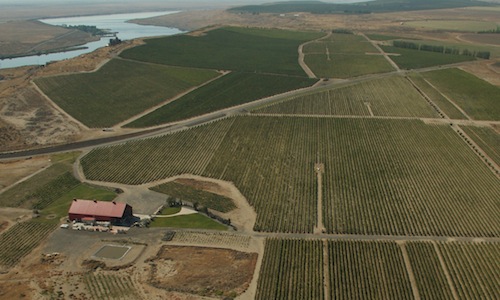 The castle and what it represents are important to the Boyles. Their son Sephan was on the first Make the Dash Count Foundation youth board, and he helped with the construction of the building. He died in September 2013.

Surrounding the castle is Destiny Ridge Vineyard, which the Boyles began planting in 1998. Today, the vineyard is 262 acres and completely planted. On the site is a distinctive red building that serves as Alexandria Nicole’s production facility. Jarrod Boyle is the winemaker and produces about 14,000 cases of wine per year.