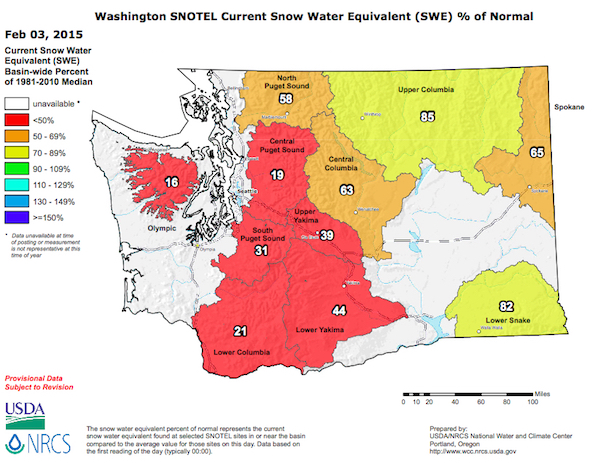 PENDLETON, Ore. — Growers in the Pacific Northwest received a grim update Tuesday from the National Weather Service regarding much of the Cascade snowpack in Washington and Oregon.

Marilyn Lohmann, hydrologist with the National Weather Service in Pendleton, Ore., published the mountain snowpack summary for the 2015 water year — October through September — and the water supply forecast for the spring and summer.

“It’s been a very low snow month across the region,” Lohmann said in her video report Tuesday. “As of Feb. 1, the upper and lower Yakima basins were well-below normal, with 38 to 43 percent of normal — down from near 50 percent of normal last month.” 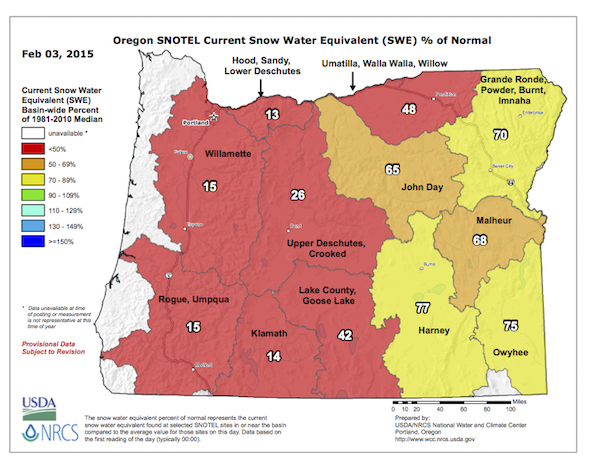 The western Cascades of Oregon seem to indicate severe drought conditions for the 2015 vintage in terms of the current snow water equivalent percentage of normal in several basins. (Chart provided by the Natural Resources Conservation Service)

The snow water equivalent for the Willamette basin stood at 16 percent on Feb. 1, while the Rogue and Umpqua basins rated just 17 percent. Even the Hood River region also is abnormally dry at 14 percent.

Farther east in the basins of Umatilla and Walla Walla, the situation isn’t as dire — 47 percent. The highest amounts were recorded in the Grand Ronde Basin at 67 percent.

However, it couldn’t get worse in the Lower Deschutes/Columbia Basin area of Oregon, where the Clear Lake SNOTEL south of Mount Hood sits at 3,500 feet elevation.

“With the warm temperatures over the last part of January, it has lost any snowpack it had acquired,” Lohmann said. 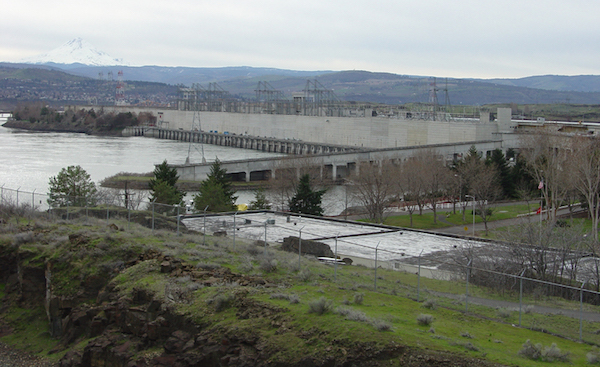 Despite the reduced snowpack in much of the Cascades, The Dalles Dam is projected to see 94 percent of its normal water flow this season, according to midwinter forecasts. (Photo by Army Corps of Engineers).

Irrigators can find some measure of relief regarding the water supply when factoring in the Northwest River Forecast Center, a site Lohmann said is updated at least once each day.

Those who pull water from the Columbia River should be grateful for the abundant snowpack in British Columbia and the northeastern portion of Washington and Idaho.

The volume projected for the Columbia River at The Dalles takes into consideration the 10-day forecast followed by a normal forecast for the rest of the season, and that volume for April through September is forecast for 94 percent of normal.

The western portion of the Columbia Basin shows the transition, however. The volume forecast for the Yakima River near Parker continues downward trend from 81 percent of normal at the beginning of January to 75 percent of normal expected.

And the Grande Ronde River system in northeast Oregon reflects how dry January was. At the start of January, the projection was 90 percent of normal, but it now stands at 69 percent. And the Umatilla River at Pendleton is at 75 percent of average.

According to the weather models, the snowpack is unlikely to rebound dramatically. The Climate Prediction Center projection for February, March and April calls for above-normal temperatures with equal to increased chances for below-normal amounts of precipitation.

“The U.S. Drought Monitor continues to show extreme drought for southeast Oregon with a deterioration in conditions along and west of the Cascades,” Lohmann said. “Much of the region remains in moderate to severe drought conditions, and those conditions are expected to continue, as we see a lack of snowpack for the mountain areas.”