The 3,767-acre area is in the Walla Walla Valley but is entirely within Oregon. Because of a quirk in federal regulations, Washington wineries may not use “The Rocks District of Milton-Freewater” on their labels unless they also have a licensed winemaking facility in Oregon.

However, the Alcohol and Tobacco, Tax and Trade Bureau (TTB) – the federal agency that regulates the wine industry – will issue a proposed ruling on Monday that would allow Washington wineries to use “The Rocks District of Milton-Freewater” on labels. Duane Wollmuth, executive director of the Walla Walla Valley Wine Alliance told Great Northwest Wine that there will then be a 60-day comment period before a final ruling is made. 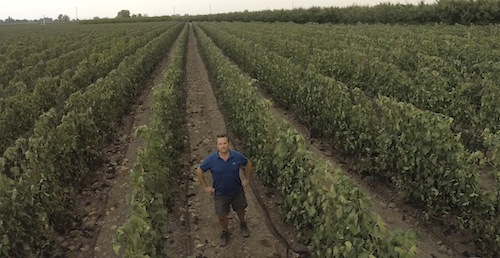 Christophe Baron, vigneron for Cayuse Vineyards, stands in one of his estate vineyards in The Rocks District of Milton-Freewater, Oregon’s newest American Viticultural Area. (Photo by Andy Perdue/Great Northwest Wine)

The Rocks District is Oregon’s second-smallest viticultural area (the smallest is Ribbon Ridge near Newberg; it is 3,350 acres). About 250 acres of wine grapes are planted in The Rocks District.

The Rocks District is considered one of the most unusual and distinctive grape-growing regions in the Pacific Northwest. Its primary feature is an alluvial fan formed by the Walla Walla River at the end of the last ice age, about 15,000 years ago. The result is miles of cobblestone that, as it turns out, are perfect for growing wine grapes.

The Rocks District has long been used for agriculture, particularly orchards. In April 1996, French native Christophe Baron came through Walla Walla to visit a friend. He’d planned to move to the Willamette Valley to make wine there but was staying with his buddy Scott Byerley.

“I came with my wine atlas,” Baron told Great Northwest Wine. “I was going through photos and showed him Châteauneuf-du-Pape.”

Châteauneuf-du-Pape is a region in France’s southern Rhône Valley where red wines are made with such grape varieties as Syrah, Grenache and Mourvèdre. And it’s famous for cobblestones that cover the ground. Byerley told Baron he knew of a place that looked like Châteauneuf-du-Pape, so they drove south toward Milton-Freewater.

“This is where I first met the stones,” Baron said.

He quickly understood the opportunity before him and purchased the land. By March 1997, he began planting Syrah between the grapefruit-sized cobbles. This was the first commercial vineyard in the area for at least 40 years.

Baron launched Cayuse Vineyards, and his wines have become some of the Northwest’s highest-scoring wines with such publications as Wine Spectator and Wine Advocate.

Thanks to Cayuse, the Rocks become famous

Since then, other winemakers have purchased land and planted vineyards in The Rocks District, including Rich Funk, owner of Saviah Cellars south of Walla Walla. In 2006, he bought land, planting 10 acres of Syrah and Cabernet Sauvignon. Funk uses grapes from throughout the 11-million-acre Columbia Valley, and he said grapes from The Rocks District are distinctive.

“The Rocks are all about savory,” he said. “It’s like walking into a delicatessen, with crazy aromatics and a savory quality I don’t see anywhere else. It doesn’t trip everybody’s trigger, but it certainly tripped mine.”

Also intrigued by The Rocks District was Kevin Pogue, a geology professor at Whitman College in Walla Walla and expert in how soil can affect grape growing. He joined with several winemakers and grape growers who wanted to petition the federal government to form The Rocks District.

During the process of his research, Pogue found Cinsault grapes growing wild in fields that were abandoned in the 1930s. He also found that nearly all of the new AVA has the same soil type.

“I don’t know of any other AVA that has 97 percent of the soils in one soil series,” he said.

He said the nation’s smallest AVA – Cole Ranch in California’s Mendocino County – is just 175 acres in size, yet it has eight distinctive soil types. 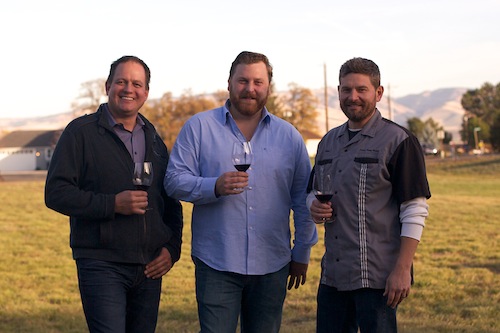 In 2007, Dusted Valley Vintners south of Walla Walla purchased 17 acres of apple orchards in The Rocks District and converted it to vines, establishing Stoney Vine Vineyard.

“There are 220 acres in the new AVA, and there’s certainly quite a bit of room for further expansion and development, which is exciting, too,” said Corey Braunel, who owns Dusted Valley with his brother-in-law Chad Johnson.

Braunel said he and Johnson have to be mindful when blending wine from Stoney Vine Vineyard because of the dense, earthy and gamy aspects of Syrah.

“When we blend them, it will be more with Columbia Valley fruit from vineyards that are really fruit-forward,” Braunel said. “That’s when we see some interesting layer development and more complexity. It shifts them toward darker wines with more minerality.”

Braunel said the soonest Dusted Valley would use the new AVA on its Tall Tales Syrah from Stoney Vine Vineyard would be on bottles from the 2014 vintage.

“There’s the 60-day commenting period, and our bottling of 2013 is scheduled for February,” Braunel said.

The Rocks District brings up some interesting issues. While it is in Oregon, it is entirely within the Walla Walla Valley, which often is identified as a Washington wine region because of the large number of wineries north of the state line.

Braunel said doesn’t believe The Rocks District will become a problem between Oregon and Washington.

“It’s a collaboration,” he said. “It’s not an Oregon thing. It’s not a Washington thing, but a Pacific Northwest thing. Everybody wins, and the AVA process is what helps define a region.”

He added that the new AVA isn’t about what is glued to the bottle.

“It’s more than the label,” Braunel said. “What this does is lend more credibility to the Walla Walla Valley story in terms of explaining what our valley is from a viticulture standpoint. There is an amazing diversity of mesoclimates and soil types. When you look at the world’s greatest wine areas, each one has a history of when they start to further delineate their region. That should be the biggest story for us in the Walla Walla Valley. Each region is so distinctive.”