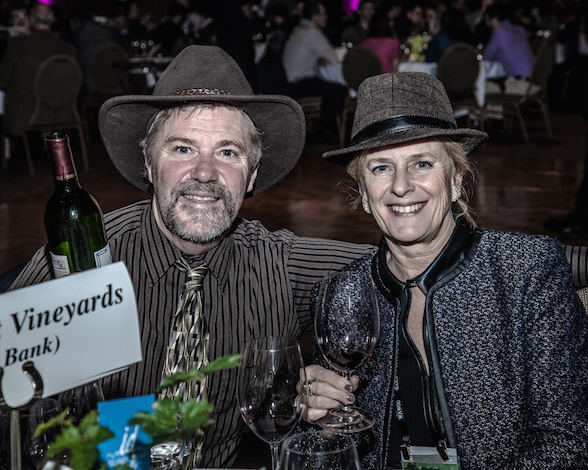 KENNEWICK, Wash. — Washington state’s wine grape growers tend to be modest group, but a few might let their hair down a bit, or at least doff their caps, Thursday night as part of the Unity Banquet and Angel Share Auction for the Washington Wine Industry Foundation.

The fundraising dinner serves as the entertaining centerpiece of the annual Washington Association of Wine Grape Growers, which begins today at the Three Rivers Convention Center in Kennewick.

“This started a few years ago when we thought, ‘We’ve just spent a long day sitting inside listening to speakers, which is informative but not a lot of fun, so why can’t we just get together among ourselves, enjoy others’ company and toast what we do so well?’ ” said Vicky Scharlau, WAWGG executive director.

And the idea for the Angel Share Auction started with someone’s good fortune and a bit of good-natured ribbing. As a result, the WWIF has raised nearly $1 million since 2001 to support education, research and leadership in the Washington wine industry.

“Ste. Michelle donated a 5-liter bottle as a door prize, and it was won by someone from Ste. Michelle,” Scharlau said with a chuckle. “As they were walking up to get their bottle, there was some playful booing and laughing, and someone shouted, ‘Auction it! Auction it!’ By the time he got to the podium, he was Vanna White and I became an auctioneer.”

That inaugural and impromptu auction generated more than $1,000, which was donated to the Walter J. Clore Scholarship Fund that WAWGG created a few years earlier to help students in the field of viticulture and enology. 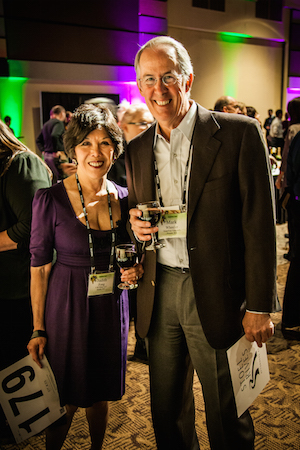 Seattle’s Judith Fong of FW Wine LLC and Mark Wheeler of StoneTree Vineyard prepare to bid in the Angel Share Auction during the Washington Association of Wine Grape Growers convention in Kennewick. (Photo courtesy of WAWGG)

“People don’t hear about the Washington Wine Industry Foundation, but it’s a long-term endeavor created by the growers and wineries almost 15 years ago for the expressed purpose to be the home to scholarships and memorials for the industry,” Scharlau said. “There was nothing like that for the industry before.”

As the annual WAWGG convention has grown, so has attendance for the Unity Banquet and Angel Share Auction. More than 400 are expected to take part in the celebration, and everyone is encouraged to wear some sort of hat to dinner.

“It’s a way of saying, ‘Hats off to us,’ a celebration of the industry,” she said. “That’s something we’ve been doing for the last couple of years. I’d say about half of the people wear them, but for the ones who don’t, mostly it’s because they needed a reminder.”

The Unity Banquet is included in the cost of member registration, but a dinner ticket costs about $200 for nonmembers, Scharlau said. 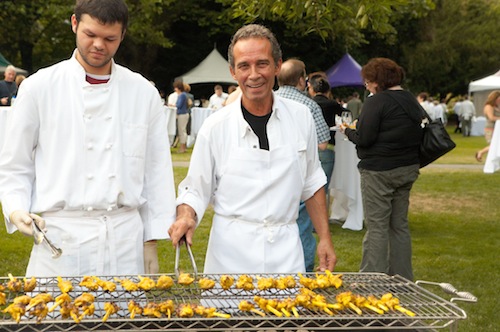 Here is the 2015 WAWGG Unity Banquet menu and wine pairings.

Attendees should remember that Kennedy is cooking for 400, a daunting challenge, yet last year’s multi-course dinner was presented in a scrumptious and timely manner.

“That’s the real challenge with that meal — when you have that many to serve and it’s not your facility and it’s not your staff,” Scharlau said. “It’s one of the reason it takes us a very long time to find someone to volunteer.”

And yet, there’s a rich alumni of chefs willing to put themselves through the dinner, which involves specific pairings with award-winning Washington wines. The list includes Seattle restaurateur Tom Douglas and John Sarich, Chateau Ste. Michelle’s beloved culinary director who died of cancer in October.

“Again, that was Ste. Michelle stepping up,” Scharlau said. “They thought, ‘A great way to put a twist on all this great wine would be to serve it with great food.’ ”

According to Scharlau’s records, no one other than Sarich has volunteered a second time. Sarich, however, served as the WAWGG banquet chef three years in a row starting in 2000. He will be among the industry leaders remembered as part of Friday’s awards luncheon.

“We will note all the people we’ve lost this past year,” Scharlau said.

There will be a few tears shed at the end of the week that will have bring up some much worth celebrating. The U.S. Department of Agriculture indicated an 8 percent increase in tonnage for the 2014 vintage, and this year will see the opening of the world-class Wine Science Center at the WSU campus in Richland. 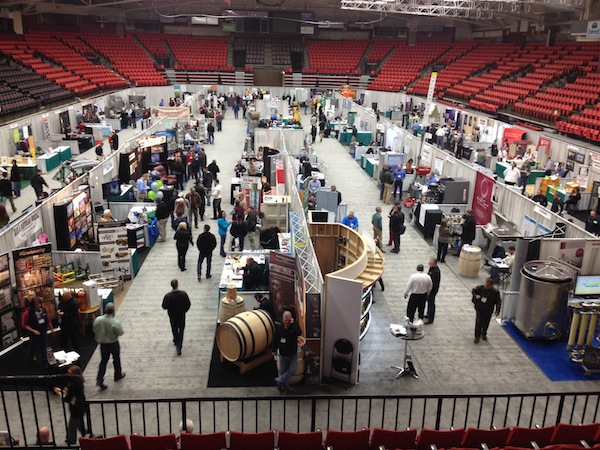 The WAWGG convention also has blossomed since 1983 from a one-day gathering of 50 attendees in Yakima to a four-day meeting of more than 2,500 registered industry leaders from throughout the Pacific Northwest as well as California, Michigan and New York. Attendance has doubled in the past six years its been staged in Kennewick.

Each year, there’s discussion about moving the WAWGG convention from the Tri-Cities. While it’s centrally located for members of the Columbia Valley wine industry, a growing number of exhibitors are denied a spot in the nearby Toyota Center. 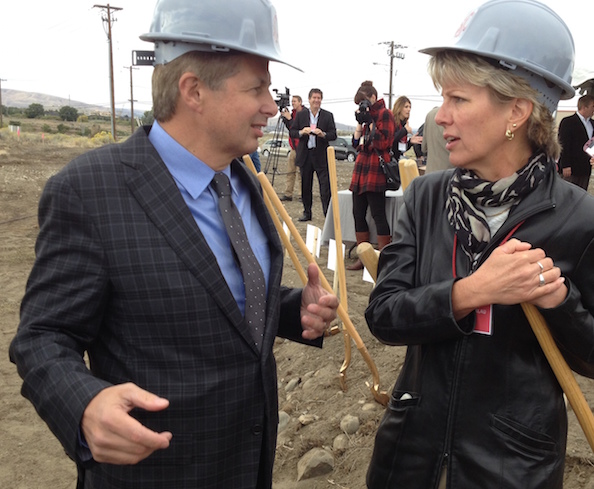 The 6,000-seat arena’s primary tenant is a Western Hockey League club. This week, the Tri-City Americans play on the road, but Scharlau said the floor of the trade show still can be nearly as cold as the ice sheet it is covering.

In recent years, winter-hardy vendors have showcased their heavy equipment on the lawn between the convention center and arena, standing in bone-chilling weather while trying to make a sale. Fortunately for those folks, the forecast this week is for unseasonably warm conditions.

“We could easily have 30 or 40 more vendors at the trade show, but we don’t have the room,” Scharlau said. “And we need to get the exhibitors off the ice at the Toyota Center. The exhibitors over the years have been very nice to work with us around that.”

The convention outgrew its longtime home in Yakima and moved to the Tri-Cities not long after taxpayers in Kennewick built the 81,000-square-foot Three Rivers Convention Center in 2004. A measure in 2014 asking voters to raise sales taxes to pay for a $20 million expansion failed, but the Kennewick Public Facilities District, which oversees the convention center and two neighboring arenas, hopes to get it on the ballot again this year.

“Attendees actually prefer the setup that we had in Yakima where everything was under one roof — the trade show, the meetings and the meals,” she said. “That’s very appealing, especially in February.”

A number of this week’s 180 vendors and exhibitors want to see the convention moved to larger venues in Seattle or Spokane, where the owners of The Davenport Hotel are poised to open a large convention center hotel later this year near the Spokane River.

“If we were serving only the exhibitors, the convention would be probably be in Seattle, but I don’t think that’s realistic,” she said. “It’s just about the space.”

Scharlau described the situation as “dire.” And her group’s contract with Three Rivers Convention Center is set to expire in 2015.

“I hope the community sees the benefit in spending funds on these types of convention projects,” she said. “There’s the return not only in terms of tourism dollars, but it grows the tax base and brings more business to their area over the long term.”