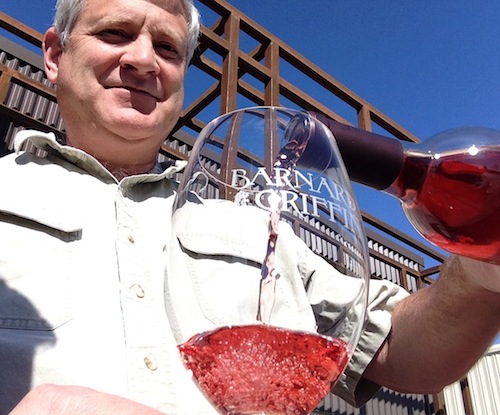 Rob Griffin, owner and winemaker for Barnard Griffin in Richland, Wash., uses Sangiovese grapes to craft some of the best rosé in the United States. (Photo by Andy Perdue/Great Northwest Wine)

RICHLAND, Wash. – Were it possible for a pink wine to enjoy a cult following, Barnard Griffin‘s Rosé of Sangiovese likely would qualify.

For the better part of 15 years, winemaker Rob Griffin has been crafting a dry rosé from the noble red grape of Tuscany with spectacular results.

Last month at the 30th annual San Francisco Chronicle Wine Competition, Griffin’s 2014 Rosé of Sangiovese earned a gold medal. It was the ninth time in 10 years that the rosé has earned a gold medal or better at the largest judging of American wines. Its only silver in the past decade was in 2013 – and that year, the wine earned best rosé at the Great Northwest Wine Competition.

The 2014 edition was released last weekend by the longtime Washington winery, just in time for Valentine’s Day. This week, we sat down with Griffin to talk about the origin of his rosé and the following it has gained. 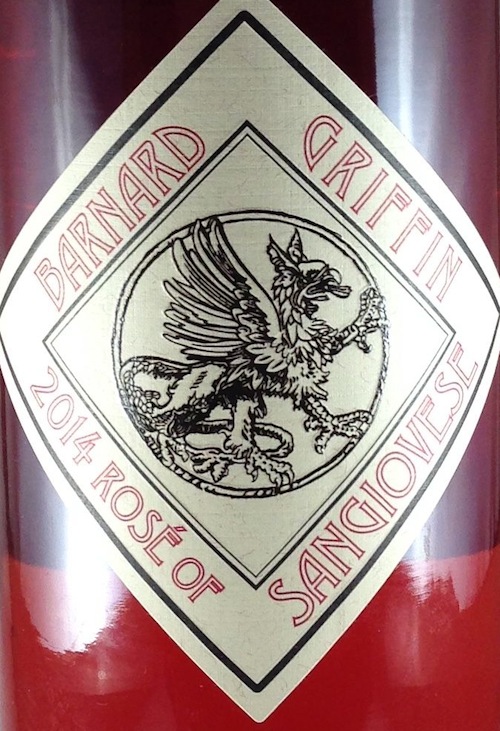 Rob Griffin and his wife, Deb Barnard, launched their eponymous winery in 1983. Griffin had arrived from his native California in 1977 to work for Preston Wine Cellars in Pasco, Wash. After starting his own side project, he later became head winemaker for Hogue Cellars for several years until he focused all of his efforts on Barnard Griffin in the early 1990s.

In those early days, Pasco grape grower Maury Balcom helped Griffin get his start with such grapes as Chardonnay, Riesling and Sauvignon Blanc.

“We’ve had a good, tight relationship ever since,” Griffin said.

In the 1990s, Balcom had a few acres of Sangiovese that didn’t have a home. Griffin was not necessarily interested in adding the variety to his portfolio, but he did offer to make the wine for Balcom to sell.

Griffin’s first effort at turning it into a red wine was less than satisfactory, so he got to thinking about making a rosé the next year.

“That got cogs and gears turning in my mind,” Griffin said. “When the next year came along, we decided to try something entirely different.”

Griffin wasn’t sure whether wine drinkers were ready for a serious pink wine.

“Rosé had not really surfaced as the social force in wine that it is these days, but it was beginning to,” he said. “People were beginning to acknowledge that there really is such a thing as quality wine in dry rosé and the world doesn’t have to be all white Zinfandel.” 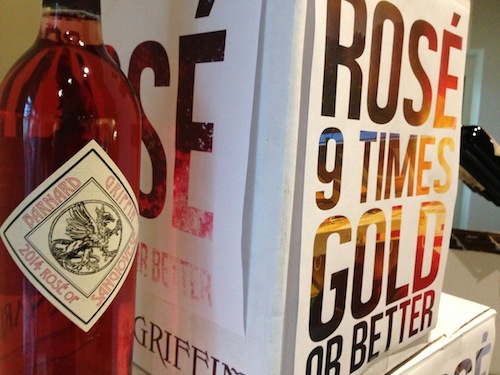 The Barnard Griffin Rosé of Sangiovese has won a gold medal or better nine times in the past 10 years at the San Francisco Chronicle Wine Competition. (Photo by Andy Perdue/Great Northwest Wine)

That first year, in 2002, Griffin turned out a few hundred cases of wine, and it sold quickly.

“The result was very rewarding from a quality standpoint,” Griffin said. “So we scaled up and made a bit more the next year.”

About that time, Griffin began entering it in the San Francisco Chronicle Wine Competition – and winning gold medals at the country’s largest judging of American wine.

“It’s important to us mentally,” he said. “It puts us into a very large venue. In essence, it’s a report card. We take a lot of pride and energy from the fact that we do well there.”

Today, Griffin makes a lot of rosé. At 11,400 cases, the 2014 Rosé of Sangiovese makes up more than 15 percent of his total production.

“Regionally, it’s rather a lot of wine,” he said. “But in a global sense, it’s a tiny drop in the large bucket. For someone making a 1,000 cases, it sounds like an endless ocean. But in fact, it’s a manageable quantity – but certainly more than we thought we would be dealing with in the early days.”

At a retail price of $13, the spectacular rosé is typical of a Barnard Griffin offering because it is a great wine at a value price. And even with the larger production levels, the Barnard Griffin staff fully expects it to vanish by midsummer.

“You know, 2-year-old rosé is no one’s friend,” Griffin said with a smile. “So we’re always anxious to get it out into people’s hands. Why would you age it? There’s no rational ‘yes’ answer there. ‘Chill it and kill it’ is the perfect description.”

By the time February rolls around, Barnard Griffin fans have a pent-up demand for the new wine, and its bright flavors remind wine lovers of sunny days that are just around the corner.

“It’s a harbinger of spring, if you will,” Griffin said. 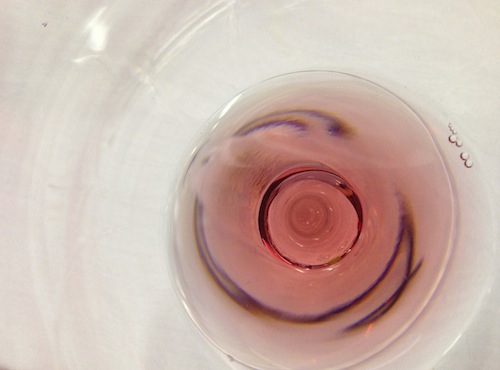 Barnard Griffin’s Rosé of Sangiovese has become a sign that spring is arriving soon. (Photo by Andy Perdue/Great Northwest Wine)

Like any top-shelf wine, a delicious rosé is not made by accident. Griffin’s efforts with his Rosé of Sangiovese start with vineyard practices that would seem the opposite of what is expected.

“I always maintain that for us, rosé is not a byproduct or a stepchild,” he said. “We really start in the vineyard to create rosé. What you want is the antithesis of what you’d want for a red.”

Griffin is looking for grapes that are lower in sugar (resulting in lower alcohol) and higher in acidity.

“All of this points to a slightly higher crop,” he said. “And that goes contrary to the conventional wisdom that the less fruit on the plant, the better the resulting quality. I’ve never quite believed that. It’s always a question of balance.”

While high-end Cabernet Sauvignon and Merlot might be anywhere from 2 to 4 tons of grapes per acre of vines, Griffin has found that great rosé comes from something closer to 7 tons per acre. This means more money for the grape grower and more wine for the consumer.

In addition to continuing to purchase grapes from Balcom, Griffin has added Gunkel Vineyard near Maryhill and Lonesome Spring Ranch in the Yakima Valley to his portfolio of growers who provide him with Sangiovese. 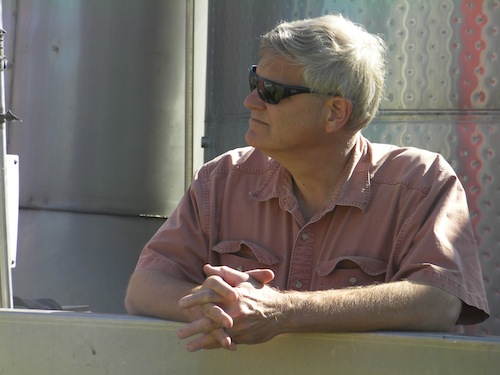 Rob Griffin is owner and winemaker of Barnard Griffin in Richland, Wash. He’s been making wine in the Columbia Valley since 1977. (Photo by Andy Perdue/Great Northwest Wine)

Griffin’s rosé is relatively low in alcohol (12.9 percent). With an imperceptible level of residual sugar, it is dry and is backed by lip-smacking acidity. The closest it comes to seeing oak would be any barrels that are placed next to the stainless-steel tank it is made in.

Griffin describes the wine in terms of fresh summer flavors, including watermelon, pomegranate, cranberry and even a fascinating hint of citrus.

“The concept of this wine is you sit out on the deck eating pasta in the sunshine in the spring and summer,” he said. “And this is the wonderful accompaniment to that.”

The Barnard Griffin 2014 Rosé of Sangiovese should be fairly easy to find for the next few months throughout the Northwest, particularly in grocers and wine retailers in the Seattle and Portland markets.