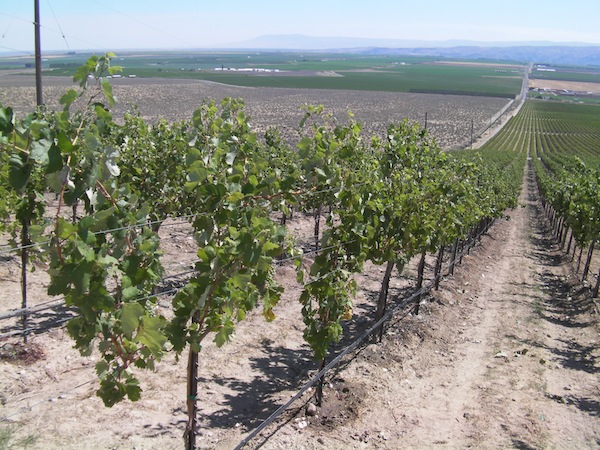 StoneTree Vineyard is on the Wahluke Slope east of Mattawa, Wash. Federal law currently prohibits Oregon winemakers from using “Wahluke Slope” on bottles of wine from this and many other Washington vineyards. That could change, however, with a proposed rule change. (Eric Degerman/Great Northwest Wine)

CARLTON, Ore. – Edward Fus buys 95 percent of his grapes from Washington vineyards. He pays the same amount as anyone else. But because he’s an Oregon winemaker, the owner of Angel Vine is treated like a second-class citizen.

But a proposed rule modification from the federal government could change all of that for Fus and many other winemakers in the Western United States.

The Alcohol and Tobacco Tax and Trade Bureau – the federal agency that regulates the wine industry – released a proposal (link downloads PDF) on Monday that would allow wineries in adjacent states to use the name of an American Viticultural Area on their label if that is where the grapes originate. Thus, a winery in Oregon, Nevada or Arizona could use “Napa Valley” on a bottle of wine that uses grapes from America’s most famous wine region.

The reason for this proposed rule change is the approval of The Rocks District of Milton-Freewater. The new AVA is entirely within the Walla Walla Valley, as well as the Columbia Valley. However, it also is completely within Oregon. This means that Washington wineries that own vineyards in The Rocks District cannot use the name of the new AVA on their wines unless they have a winemaking facility in Oregon.

Rich Funk, owner and winemaker for Saviah Cellars, is in that exact situation. His winery south of Walla Walla is a half-mile north of the Oregon state line, and his estate Funk Estate Vineyard in The Rocks District is perhaps five miles to the southwest. Yet because it’s on the other side of a political boundary, he would be unable to use the new AVA’s name on his bottle.

“I think it’s a step in the right direction,” Funk told Great Northwest Wine. “This is going to bode well for all involved.”

Angel Vine’s label for its StoneTree Vineyard Zinfandel carries the Columbia Valley AVA. It is against federal law for owner Edward Fus to use the Wahluke Slope AVA.

For Fus, owner of Angel Vine in Oregon’s Yamhill County, the proposed ruling is a long time coming. Fus focuses on Zinfandel from such Washington AVAs as the Horse Heaven Hills and the Wahluke Slope. Because of the federal laws currently in place, he is able to use “Washington” or “Columbia Valley” on the label (the Columbia Valley crosses the Columbia River into Oregon, just as the Walla Walla Valley does).

“Using ‘Columbia Valley’ limits me and doesn’t help the consumer in the least,” Fus said. “People are always asking me where I get the grapes. I would like to use the AVA. I would use them in a heartbeat.”

About 20 percent of Fus’ wines are sold in Washington, and he believes he is at a disadvantage because he cannot be more specific about the AVA. He said that while not all wine drinkers care about AVA designations, savvy consumers do.

“Somebody who is interested in wine wants to get down to the nitty gritty,” he said. “Any time you can give the consumer information about what is in the wine, the better it is for them. They can compare better, and they can understand what they’re buying better.”

“It’s an absurd ruling, and it has been for a long, long time,” Berger said. “This is a vestige of Prohibition.”

Berger said the more information a wine buyer has, the better off everyone is. 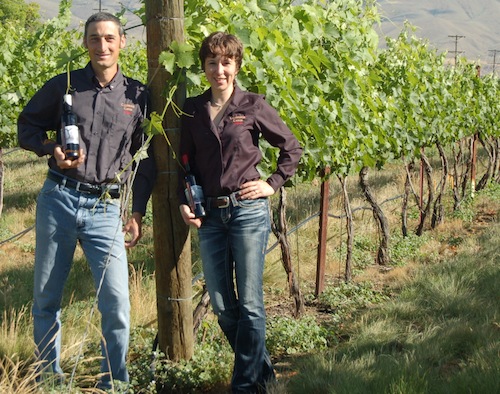 Coco Umiker is making some of the best Washington wine around. She just happens to be in Lewiston, Idaho, where she and her husband, Karl, own Clearwater Canyon Cellars. In addition to growing and buying grapes in the Lewis-Clark Valley (a proposed AVA that would be in both Idaho and Washington), the Umikers uses grapes from Phinny Hill in the Horse Heaven Hills and Verhey Vineyard in the Rattlesnake Hills.

For two years in a row, Umiker’s Phinny Hill Carménère has earned a Platinum from Wine Press Northwest magazine. Her 2012 Carménère was No. 24 on The Seattle Times top 50 wines of 2014 and No. 11 on Great Northwest Wine’s top 100 list.

Yet the best she can do is label it as a “Washington” wine.

“It’s been a real bummer for us over the years to be excluded from putting Horse Heaven Hills on the label,” she said. “To me, an American Viticultural Area is there to give credit to where the grapes came from.”

Umiker has been reading up on the issues the Walla Walla Valley winemakers in Washington would deal with if the proposed ruling is not approved.

“They are facing what we have been facing for a long time,” she said.

Umiker said that the high-end wines from her 1,500-case winery don’t spend a lot of time on store shelves because they first go to wine club members, and that helps.

“Our wine club members know the source of the grapes,” she said. “So it hasn’t necessarily hurt us. But to put ‘Horse Heaven Hills’ on our label would help us over just having ‘Washington’ on there. For people who don’t know us or know the grapes, it adds another level of intrigue that might spark some extra interest.”

Next step for proposed TTB rule 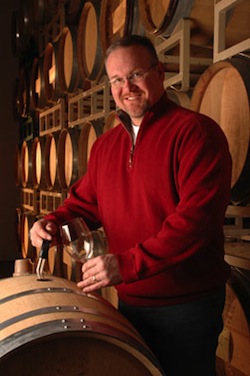 Rich Funk is the owner and winemaker at Saviah Cellars in Walla Walla, Wash.

The proposed rule was released Monday, and it now enters a 60-day commenting period. Umiker said she plans to submit her viewpoint, and it is likely that many Walla Walla Valley winemakers will, too.

It also is possible that California wineries looking to protect their hard-earned reputations might oppose the ruling as it is currently written. After all, does everyone in Napa Valley want wineries in Oregon, Nevada and Arizona to have the ability to put “Napa Valley” on their labels simply because they bought some grapes there?

Berger hopes so, but he’s not optimistic.

“I think short-sighted winemakers may want to oppose something like this because they would perceive that fruit traveling hundreds of miles on a truck can’t make wine as good as something made two blocks away,” he said. “I don’t think it’s an issue. California grapes have been shipped to Japan to make wine for a long, long time without issues.”

Funk doesn’t know that the ruling will go through as proposed.

“This language works for us,” he said. “The comments will bring out a lot of interesting ideas, and there are going to be some issues. I’m not convinced this won’t be modified as a result of some of the comments. We’re not just trying to run this thing through.”